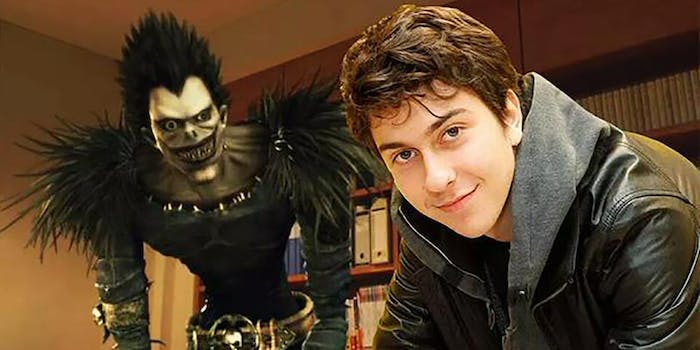 Can Nat Wolff carry the role of Light in the U.S. ‘Death Note’ movie?

And no, the star of 'Paper Towns' isn't Japanese.

Finally, after years of casting rumors and endless speculation, the Death Note has an owner.

After being stuck in perennial Hollywood development for nearly a decade, the U.S. adaptation of the hit Japanese horror series suddenly lurched forward this year with the announcement that The Guest‘s Adam Wingard would be directing a script from Fantastic Four‘s Jeremy Slater.

Now, a crucial piece of the production has fallen into place: Nat Wolff is reportedly in final negotiations to play the main character and villain, originally named Light Yagami in the bestselling manga and anime series.

Wolff, who is not Japanese, made a splash in Paper Towns over the summer and is currently starring in The Intern.

The casting of Wolff positions the U.S. adaptation to move in an interesting direction, and fans are eyeing the move as an example of the oft-unfortunate tendency of overseas adaptations to erase or replace the cultural markers of the original narratives rather than leaving them intact. Though little is known about Slater’s script, Death Note is a distinctly Japanese cultural product in many ways. The presence of Japanese shinigami, or death gods, plays a huge role in the plot, as does the clash between traditional Japanese values and modern idol worship and pop star culture.

The character of Light is, in particular, a model product of Japanese society: a glamorous straight-A student with an actual pop star for a girlfriend. When he comes into contact with a Death Note, however—a divine book used by shinigami to determine who lives and who dies—the cracks in his picture-perfect veneer rapidly begin to show. He devolves into sociopathy and an outright megalomaniacal urge to use the death note to become his alter-ego Kira, “the god of the new world.”

This all seems a bit removed from the homespun image of Wolff, who began his career as a boy band member on Nickelodeon. Fans of Death Note seemed largely startled and upset by the casting news.

NO WAY are they making another Death Note film starring Nat Wolff.. what on earth. They'll probably rate it PG as well.. #illstillwatchittho

Again and again, fans reacted to the racebending of the role to erase Light’s Japanese ethnicity:

Why not cast Asian actors in these roles??? http://t.co/BMUyphErc5

Had the production been interested in retaining Light’s Japanese identity, they could have easily made him a Japanese-American student with the same high-achieving status and interactions with Japanese culture. Speculation that the film could still be set in Tokyo, like other American remakes of Japanese horror films such as Black Water and The Grudge, brings a new set of accompanying problems. As Death Note progresses, society essentially falls into worship of “Kira” and the power he wields over humanity through the Death Note. This is often read as being a dark satire of modern Japan and nihilistic consumerism; but having a white American declare himself the new god of Tokyo and being duly worshiped wouldn’t carry the same kind of social criticism.

Still, with experienced horror director Wingard at the helm and Heroes actor and anime fan Masi Oka producing, there’s yet hope for the film. And there’s one other major decision to be made before writing the U.S. remake off: the casting of “L,” the erratic but dogged genius detective who becomes Light’s friend even as he engages him in a cat-and-mouse game to catch Kira.

L’s casting is what will really make or break the production. In the meantime, fans can look forward to the new “unauthorized” movie sequel coming out next year in Japan. The new movies will retain the concept of the Death Note but won’t have much to do with the original plot.

The Death Note manga has sold 30 million copies around the world, and spawned two blockbuster movies in Japan along with a stage musical produced earlier this year, in addition to the hit anime series and a recently aired Jdrama.

It’s also spawned this fanvid, which is currently the only thing helping us cope with our remake-related anxiety. [But beware spoilers!]

So whose name will you write in your book to play L?