Need more Deadpool in your life? Check out these comics

So you’ve finally seen the Deadpool movie after all these months of anticipation, and despite any misgivings you may have had, you fell instantly in love with the merc with a mouth. Let’s face it: Between the snark and the tragic backstory, who wouldn’t want more Wade Wilson?

Luckily for you, there’s plenty of Deadpool in the pages of various Marvel comics. Though Deadpool didn’t get his own series until 1997, he caused plenty of trouble among the X-Force and other superhero team-ups first.

Marvel has helpfully compiled most of the major Deadpool storyline appearances into its Deadpool Classic series, but if you don’t want to wade (get it?) through several volumes, you don’t have to. Here are our picks for the essential Deadpool highlights you’ll want to hit on your voyage through Wade Wilson’s weird, wacky, and occasionally disturbing life story. This is the first historical appearance of Deadpool in the Marvel universe—not counting the time he traveled back in time and invaded a vintage Spider-Man comic (long story). Deadpool introduces himself as a wisecracking, endlessly mouthy mercenary, and the rest is history. In this issue, all Deadpool breaks loose, basically, as we learn a few interesting secrets about Deadpool and another character we met in New Mutants #98. While the implications for the X-Force team are huge, it’s also a revealing look at a critical part of Wade Wilson’s backstory. This is Deadpool’s first limited series, a four-issue book that sees him encountering Weapon X again for the first time since he left the program years ago. (It’s not pretty.) 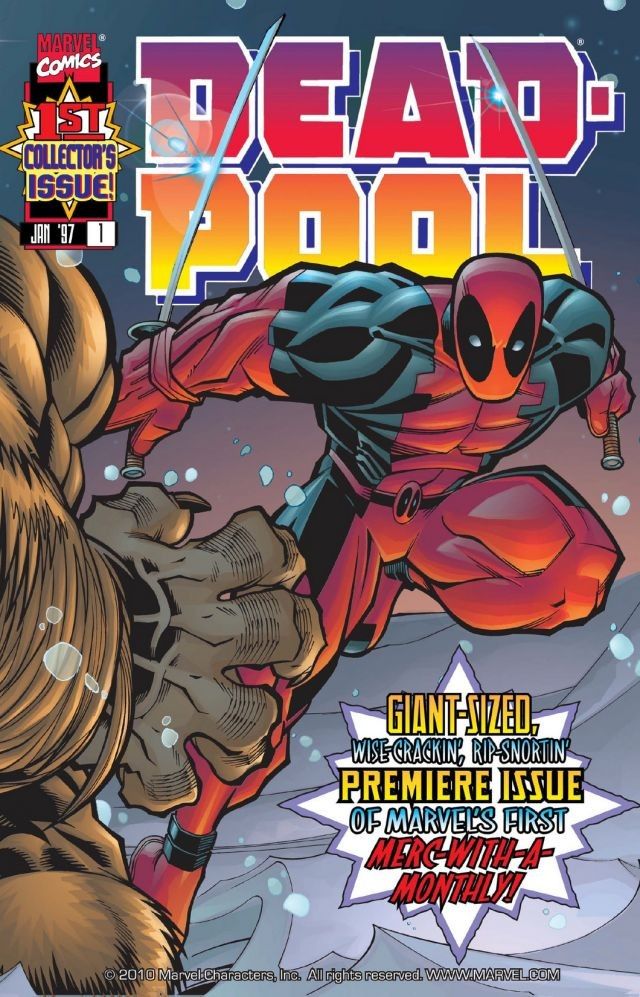 Deadpool’s first outing with his own ongoing title series sees Joe Kelly and Ed McGuinness partner up for a beloved run that has long reigned as one of the defining arcs of Deadpool’s character. Reading all of Kelly’s 33 issues is important; however, you should also make sure you make room in the middle for one of the most seminal Deadpool issues of all… This special issue is the first of a line of Deadpool annual issues, many of which reunite Deadpool and his soulmate, Death. In it, we learn for the first time the whole gruesome truth of Deadpool’s Weapon X origin story, and the seeds for the borderline madness, nihilism, and cruelty warring with heroism within him that we’ve seen since. Gail Simone joined Deadpool just in time to shepherd it through a fascinating denouement and into Agent X, a series which picks up where Deadpool left off and introduces a nebulous new superhero who may or may not be Deadpool himself. Though she left mid-series, Simone returned briefly for the conclusion in issues #12–15, which resolved the issue of Agent X’s identity and laid groundwork for one of the most popular team-ups in Marvel history. Billed as the Marvel Universe’s odd couple, Cable and Deadpool essentially formed a buddy cop duo under the hand of writer Fabien Nicieza. They bickered and fought their way through the universe for 50 issues. A time-traveling cop from the future, Cable was the unexpected perfect foil for the merc, often keeping him from drifting over questionable moral lines. In between fighting alongside him, Wade managed to get up to plenty of shenanigans with a whole host of Marvel characters, including Spider-Man, the Fantastic Four, and his popular temporary team-up with Wolverine in issues #43 and #44. Deadpool’s run-ins with Wolverine continued in his mini-arc in Origins, which dovetailed nicely into Deadpool’s next solo series, helmed by Daniel Way. Though Way’s run of the series was controversial, he contributed a lot to our current understanding of Deadpool, including typifying the on-again, off-again canon that Wade’s occasionally split personality frequently talks to himself. This limited series was a dark and somber switch for Deadpool. Writer Duane Swierczynski revisited Deadpool’s origin story and took a post-modern, existentialist approach to the many unanswered questions we have about his past and why he is the way he is. Unapologetically bleak, this side comic isn’t for the faint of heart, but it’s also a great new perspective on the character and an oddly fitting alternative universe. What if Deadpool’s awareness that he’s in a comic rendered him the only sane member of the Marvel universe? If you thought he was destructive before, you have no idea. That’s the principle behind this popular series, in which Deadpool basically flips out and decides to end Marvel and all its characters once and for all. In this bizarre arc, Deadpool and Spider-Man team up against a hitman… who’s a monkey. And just when you think you’re on board with that bit of nonsense, writer Way wacks you over the head with Deadpool’s eternal moral identity crisis. Prepare for feelings. And monkeys.

Prior to the new Deadpool movie, and apart from Ryan Reynolds’ brief X-Men cameo, this cartoon was the only significant onscreen version of Deadpool that fans had to enjoy. Fortunately, it’s a great episode that showcases plenty of what we love about the merc with a mouth—his lively, snarky sense of humor, his talent for flummoxing friends and enemies, his occasional split personality, and the eternal conflict between his longing to be a hero and his desire to kick ass and get paid. It’s also a great intro to the perennial favorite frenemyship that is Spider-Man and Deadpool, a.k.a. Spideypool. With Fox hoarding the film license to Deadpool after the success of the film, it’s likely that this will be the only onscreen Spider-Man/Deadpool team-up we’ll see for a while.