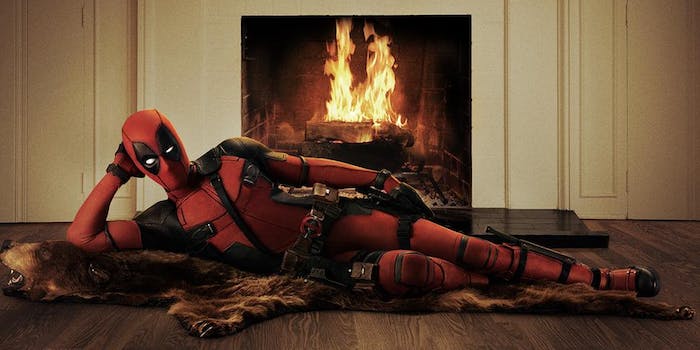 The movie is getting made thanks to a leaked test scene, so it's no surprise they're leaking more.

In a world where Star Wars fans used drone cameras to spy on The Force Awakens set and Marvel Studios tried to subpoena Google when hunting down a trailer leak, the Deadpool movie seems refreshingly relaxed about spoilers. And rightly so: Deadpool only exists because someone leaked some test footage online.

Deadpool just started filming and doesn’t come out until February 2016. Still, its creators have already started releasing promo images and tacitly allowing fans to film stunts on the set. They’re obviously keen to reassure fans that unlike the Deadpool of X-Men Origins: Wolverine, this version will be fun, weird, and loyal to the adult-rated tone of the comics.

Ryan Reynolds seems pretty excited about the role, and has already posted a few photos of himself in character. The most recent is a picture with Brianna Hildebrand as Negasonic Teenage Warhead, a mutant telepath with the ability to predict the future (and, incidentally, one of the coolest names in Marvel comics history).

Plus, just in case you’ve forgotten that Deadpool is definitely not like other superhero movies… a photo of Reynolds on the toilet. Acting is a weird job, you guys.

Videos and photos from the film set suggest they’re remaking the test scene that was leaked last year. Reynolds was spotted filming an action sequence on the Georgia Viaduct in Vancouver, much of which has now appeared in grainy clips on Instagram.

If you feel the need to watch all the clips in one place, YouTube user Michael Burnyeat has edited them together with an optimistically epic soundtrack. Is Reynolds the perfect Deadpool or a glorified stunt man in a mask? Deadpool fans will be debating this issue until the movie comes out, although the filmmakers are evidently hoping to settle the argument before then.

Since we already know what Deadpool’s costume looks like, the most interesting set photo is Reynolds in makeup as Deadpool’s alter ego, Wade Wilson. Wilson has severe facial scarring and Reynolds is likely to keep the mask on for much of the film, making Deadpool very different from most other superhero movies—and from Reynolds’ back catalog of handsome everyman roles.

If you told comic book fans in 2010 that the star of the widely derided Green Lantern movie was a must-follow on Twitter, you’d probably be be laughed out of the room. But given his obvious love of Deadpool, Reynolds may actually be winning us over.