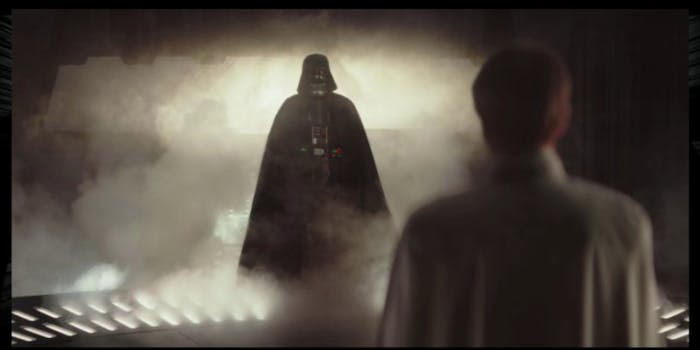 Screengrab via Knight of Adam/YouTube

Will Darth Vader be in the Han Solo movie?

I sense something... a presence.

Spencer Wilding, the actor who portrayed Darth Vader in Star Wars: Rogue One, will be returning to the franchise in the as-yet-untitled Han Solo film.

The news that he will be a part of the upcoming film came in the form of a cancellation: Wilding was set to appear at Fandom Fest, in Louisville, Kentucky, from July 28-30. A list of canceled appearances shows that he will be unable to attend due filming obligations for the Star Wars universe.

The stand-alone film will take place before the events of Star Wars: A New Hope. The star-studded cast confirmed for the film includes Alden Ehrenreich as everyone’s favorite scruffy nerf herder, Donald Glover as a young Lando Calrissian, Woody Harrelson as Beckett, and Emilia Clarke.

After Lucasfilm abruptly parted ways with directors Phil Lord and Chris Miller, it brought in Ron Howard to get the movie back on track. Since then, Howard has been expertly flooding social media with tiny teases to reassure worried fans and rebuilt excitement for the film.

lining up a shot today from my director's monitor

Wilding’s short but impactful appearance as Vader in Star Wars: Rogue One was one of the most memorable parts of the film. No announcement has been made regarding what role Wilding will play, and it’s worth noting that Star Wars has previously featured actors in multiple roles.

There is no guarantee that Vader will be in the Han Solo film, let alone that Wilding will play him. The 6-foot-7-inch tall actor is known for his convincing portrayal of powerful and imposing characters—he played one of the White Walkers in Game of Thrones—so regardless of how he is cast, fans should be able to spot him.

And if Vader does stalk onto the screen next year, we can think of few better actors to play him.