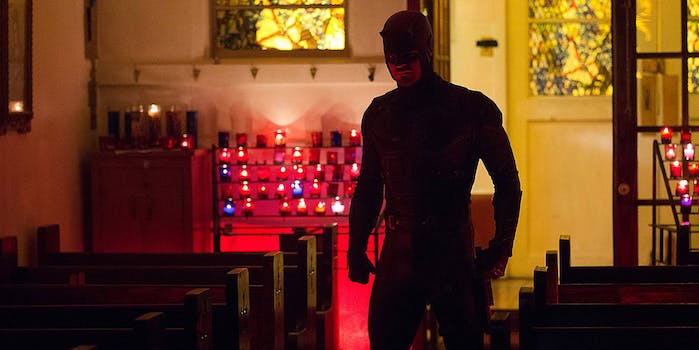 We spoke to the martial artist behind the superhero stunts in 'Daredevil' and 'Captain America: Civil War.'

Even among the stiff competition of comic book adaptations, Daredevil has an impressive reputation for action scenes and fight choreography.

Lead actor Charlie Cox went through intensive training for the role, but most of the more dangerous and complex stunts were performed by martial artist and stunt actor Chris Brewster. Along with performing stunts for TV shows like Glee and Teen Wolf, Brewster has appeared in numerous Marvel adaptations including Agents of S.H.I.E.L.D., Guardians of the Galaxy, and doubling for Chris Evans in Captain America: The Winter Soldier.

In an interview with the Daily Dot, Brewster shared some insight from behind the scenes of Marvel’s most exciting action sequences, discussing the creative process behind Daredevil‘s fight choreography, and the difference between performing as Daredevil and Captain America.

You’ve worked on a wide range of projects, but Marvel is probably the most high profile. How did you end up working on so many of their TV shows and movies?

Honestly, it was a very big coincidence, but I feel like my entire life has kind of pointed in the direction of what I’m doing right now, as far as being a stuntman for superheroes. I grew up doing martial arts… some are more realistic and applicable in street-fight scenarios, and then some martial arts are a lot more towards the performance aspect of the art. I grew up with those.

I did a lot of extreme martial arts, which combined traditional martial arts with acrobatics and gymnastics, and basically it’s all the tricky, flippy fun stuff. I feel like that is literally created for the movies.

So, were you a particular fan of certain martial arts actors as a kid?

Oh, absolutely. You know, as a child it was always the Ninja Turtles. I wanted to be Raphael. And then as I got older and realized I most likely would not turn green and become a ninja turtle, I started watching martial arts movies. Between Van Damme and Jackie Chan, then as I got older Donnie Yen, those were always my idols.

In terms of the characters you’ve been playing recently, the two biggest would obviously be Captain America and Daredevil. How would you describe the difference between their styles? Which techniques define each character?

If you follow the comic books, they have very distinguished styles, both of which are black belts in several different styles. Captain America is an expert judo practicioner, so all of his movement is based generally around that. You know, he’s more towards the takedown and everything. Whereas Daredevil’s style is a little bit more honed.

So Captain America’s style is a bit more “one hit, one kill,” whereas Daredevil, he doesn’t have superpowers. I mean, his senses are his superpower, but he doesnt have any healing factor or super strength. So when Daredevil gets in a fight, it’s a lot more important that he fights with his guard up. His style has to reflect that if he actually gets hit, it’s going to hurt. Rather than letting people hit him and hitting them 10 times harder, he has to block and counter and avoid getting hit.

One thing that is absolutely amazing about the show is the lead actor, Charlie Cox, took me in from day one and kind of broke me out of the stuntman mentality where you are coming in and performing a dance. You know, for the most part, doing stunts, you’re doing a lot of dancing. You memorize choreography and then you go out and perform it.

Charlie took me in from day one and told me how he viewed the character, and how he thinks Matt Murdock and Daredevil would move. So I was able to put that into every punch and every kick that Daredevil threw, because I saw how he visualized the character. It was a really amazing and rewarding experience, because I’ve never put that much time into the acting aspect of the character as obviously an actor would.

That’s really interesting, because I was wondering about the process of how the fight scenes on the show get choreographed. Do you have input into choreographing those scenes, or is there someone else who kind of dictates everything?

When it comes to movement, in most TV shows and films, all of the movement is created by the fight coordinators. However, on Daredevil, Charlie puts so much thought and energy into the character that Charlie and myself team up creating Daredevil’s movement every step of the way.

Whenever the script comes out, the stunt coordinator and fight choreographers will get together, and they come up with the general game plan. Like, “OK, he starts here, and he’s gonna move this way, he takes out two guys over here.” But then I feel like Charlie and myself take the skeleton of the fight scenes, and then we add the body, with the character on top of the choreography.

So is there a particular scene or moment in season 2 that you’d highlight as an example of that, something you enjoyed?

Well, in my opinion the coolest fight scene of the second season is the stairwell fight in episode 3.

What’s amazing about that scene is, Charlie and I got to literally jump back and forth. Each one of us did about half of that scene, but it would jump from one of us to the next, to the first, to the next. And that was one of those really, really great spots where we actually had time to create things with Charlie.

I mean, Charlie is so busy in this show, he’s in just about every single scene, so to get the opportunity to have him for an entire day of choreographing and concepting the fight, it makes the fight so much better. Having an actor’s input, especially an actor as dedicated and on-point as Charlie is, it just adds a whole new dimension. I feel like it takes a fight scene that’s already pretty good, and brings it up to that next level and makes it amazing.

And what was it like working with Jon Bernthal and the Punisher this year?

Oh my god, Jon is amazing. He was so awesome. One of the coolest people I’ve ever met. I love hanging out with him. We got the chance to work out together a whole bunch, you know, kind of just hang out both onset and offset. He’s an absolutely great person, and you could not have found a better Punisher. Like, the way he walks, the way he carries himself. Every move. Even the voice he makes. It makes the Punisher such an awesome character.

And finally, I guess you may not know yet, but are you going to be working on season 3? Are there plans in the works for that yet?

Oh, I hope so! I am very very close with Charlie, we’ve become very good friends, and I would like to double him for the rest of our careers. So hopefully I’ll be doubling him on season 3 and Defenders and whatever else comes his way.