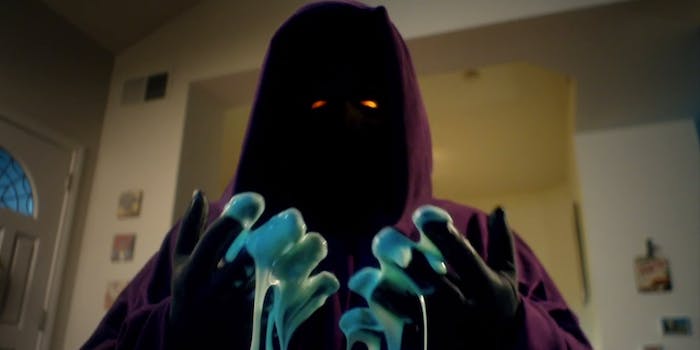 At last, the hero we both need and deserve.

Cross a Community–esque comedy group with the tropes of superhero sci-fi and Young Adult fiction and what do you get?

Brilliance, in the form of a new short concept film on Vimeo called “The Boy Who Couldn’t Sleep and Never Had To.”

Starring Tony Revolori (Grand Budapest Hotel) and Jack Quaid (The Hunger Games), the film introduces two best friends who’ve been creating a comic book full of superheroes and intergalactic adventures. At the worst possible time, the two friends discover that one of them has developed superpowers that allow him to bring elements of the comic into reality. Though this feels like a tongue-in-cheek concept we’ve seen before, the comedic element keeps the film light on its feet.

If you still yearn for the beautiful friendship of Community’s Troy and Abed, the two pals at the center of the film will make you happy in your soul, while the loving homages to vintage sci-fi and Spielbergian fantasy like E.T. and Gremlins will satisfy your inner nerd. Also there’s a cute little alien. (Temporarily.)

The concept short is directed by Dan Eckman and based on a 2010 YA novel of the same name by D.C. Pierson. Eckman and Pierson met in an NYU comedy troupe in the early 2000s, along with Donald Glover. The three later joined other comedians to form a comedy troupe called Derrick Comedy. Ever since they’ve been frequent collaborators; Eckman directed several of Glover’s Childish Gambino music videos while Pierson contributed lyrics. Eckman also directed the Community episode “Digital Exploration of Interior Design” (the one that starts the great pillow fort war). In 2009, Eckman directed Glover in the Derrick Comedy feature film Mystery Team, which made its debut at Sundance.

Eckman, Pierson, and writer Meggie McFadden, another Derrick Comedy member, hope to use the short’s Internet release to drum up support for a feature film. Here’s the proposed film synopsis:

Darren, a high school outcast whose only refuge is his homemade comic book, gets launched into an adventure way cooler than anything he could dream up when he discovers his best friend has no biological need for sleep and can bring their dreams into reality.