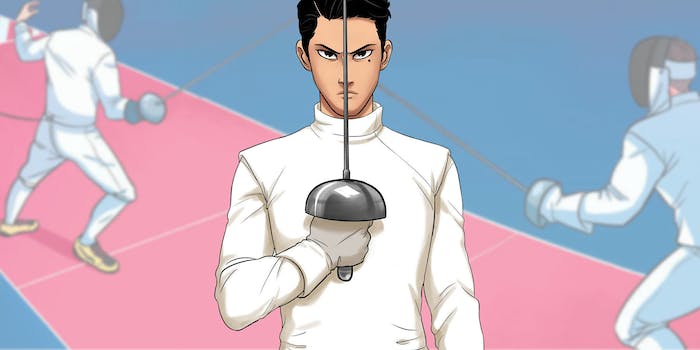 Author C.S. Pacat gained a cult following with her Captive Prince trilogy, a fantasy romance epic that was originally serialized on LiveJournal. Now, she’s teaming up with artist Johanna the Mad to create a comic in the style of sports anime like Haiky?!! and Yuri on Ice.

Fence is about a 16-year-old competitive fencer named Nicholas, who clashes with his new classmates at an elite boys’ school. Pacat developed a love of sports manga while living in Japan, and she decided to combine that interest with her personal experience with fencing. Nicholas is your classic athlete protagonist: an outsider with a troubled past, coming up against more experienced rivals like Seiji, a prodigy who has already been training for 10 years.

If you’re into the accuracy of the figure skating in Yuri on Ice, it sounds like Fence will be similarly satisfying. Speaking to the LA Times, Pacat said, “I’m working with a really great épée coach in Australia to choreograph all the fight scenes. And I’ve been working with him on the fencing characterization of each boy, so they’ll all have different strengths and weaknesses that will evolve throughout the narrative.”

In the grand tradition of sports anime fandom, there will also be romantic tension in the comic.

“I was really interested in taking a lot of the energy within sports that are often sublimated and just bring them out to the surface,” said Pacat. “That includes the female gaze approach and also includes openly queer characters. But not in any sort of sad way. I hope to be writing something that’s very joyously and unabashedly queer. That’s very important to me.”

After landing a book deal for her self-published Captive Prince books, this marks another step into mainstream publishing for Pacat. However, there’s still a hint of internet fandom in this creative partnership. Pacat apparently discovered Johanna the Mad’s work through Tumblr, with a piece of Mulan fanart. Published by Boom! Studios, Fence will be Johanna’s professional debut as a comics artist.