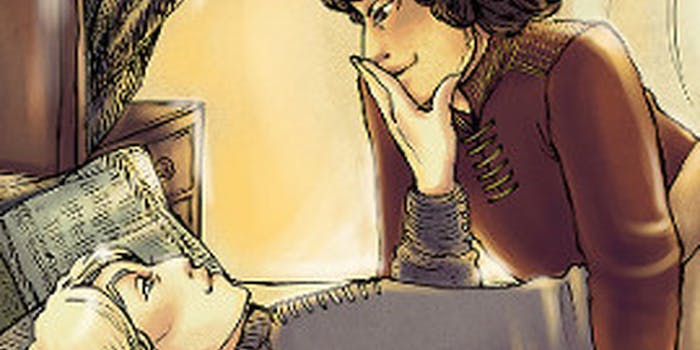 The author discusses publishing online, her fanbase, the difference between writing fanfic and original work.

Captive Prince by S.U. Pacat went on sale in two volumes a week ago and promptly became an Amazon bestseller. An epic work of slave erotica, it currently has a perfect five-star rating and is garnering glowing reviews from readers.

While it may be new to many readers, however, Captive Prince is actually a long-standing, still-in-progress work of fiction that occupies a nebulous genre known as “original slash.”

Slash fiction is specifically fanfiction concerning pre-existing male characters. So it’s hard to define original slash except as something that looks a lot like male/male fanfic—but it’s all original material. In concept, it’s similar to the text-based equivalent of Japanese yaoi, or male/male manga targeted towards young women. The original slash fiction community online shares lots of overlap with the fanfiction community, and many original slashfics—as  works are commonly referred to as—not only have a largely fandom-savvy audience but have generated their own fandoms as well.

Captive Prince is so popular it’s generated fanart, fanfiction, devoted community discussions, fan-made resources, and lots of fan buzz. It even has its own Fuck, Yeah Tumblr.

Pacat has been posting the work in serial form online for years, garnering a loyal following content to wait out the sometimes lengthy periods between updates. The first two volumes have  finally been published, but fans are already settled in to wait for the publication of the third volume. Though Captive Prince is classic erotica—the main story involves an, er, captive prince forced to hide his identity when he’s forced into slavery to the hot ruler of the next kingdom over—it also goes above and beyond most published forms of the genre by carefully building a universe full of epic political worldbuilding and a large, complicated cast of characters. The general consensus among fans of the series seems to be that while you might come for the slavefic, you stay for the plot twists..

We spoke to Pacat about publishing online, her fanbase, the difference between writing fanfic and original work, and whether “original slash” even exists.

DD: When did you begin writing Captive Prince, and what gave you the initial idea?

I started working on Captive Prince a few years ago, while I was living in Tokyo. Truthfully, I wasn’t good at ideas then, I had no process. I thought ideas sprang fully formed into the mind of the writer, and since that didn’t happen to me, I assumed I must not be a writer. I didn’t realise that ideas are glimmers, inklings that must be seized and worked on.

So I was at that early stage of ‘I would like to write but I don’t know what to write about’. My process was honestly ridiculous. I thought, well, if I am going to write a book, it should be about something that I like!  I literally wrote down a list of everything that I liked. The first thing on the list was ‘princes’ and the second thing on the list was ‘hot guys with unbearable tensions between them’. That was it. I still have the list, ‘antiheroes, sword fights, biased viewpoint, rooftop chases, daring escapes, enemies, court politics, power plays’—it goes on.

DD: Were there other online writers who influenced you? Who were they? Did you have any other influences like yaoi or earlier works of erotica?

I would not have written Captive Prince if I hadn’t read Sahari’s Court of Eternity. It was high fantasy original online m/m, and all I really remember of it now is the cool, manipulative dragon emperor, and lots of lines like, “The dragon will never bow before the lion!” I had never seen anyone write m/m high fantasy before and it showed me that this kind of story could exist, could be something I could do.

The Western writer I admire most is [Dorothy] Dunnett, and Laurent’s antecedent is Lymond, but he is also undeniably influenced by all of those effortless blond semes that I loved as an adolescent, Iason, Nakago, even Griffith from Berserk. [Ed note: a seme is the Japanese word indicating a strong male character who plays a dominant role in Japanese yaoi, or male/male manga.] Those cool, inimical blonds…

But truthfully, I’m not sure I can point to a body of erotica and say ‘This is my influence’, because part of the reason I wrote Captive Prince was that I couldn’t find the story that I wanted to read. A lot of my ‘kinks’ are all things like tension, high stakes, adventure, as well as high id archetypes—the dangerous, manipulative, frigid prince, the powerful, warrior-hero—and I wanted to write that but with a kind of—maybe psychological realism is the wrong word, but, psychological plausibility. 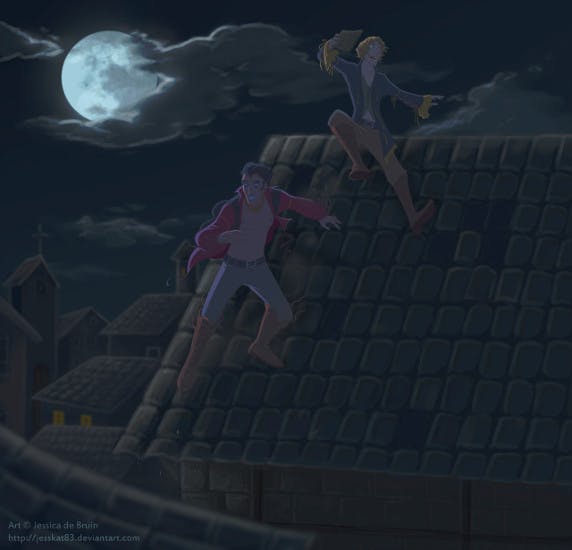 DD: Do you think of Captive Prince as “original slash” or as “male/male erotica,” or are those two terms interchangeable?

To me slash implies some sort of dynamic that is being subverted, the queering of some pre-existing space. The buddy cops are lovers story. The hero and his sidekick are lovers story. These are subversions. But I think that the queer elements of Captive Prince are generated from the story itself and are not a subversion of something else. As a friend of mine said recently, there is no straight version of a prince and his male pleasure slave that is being ‘slashed’ by Captive Prince. In that sense, I think Captive Prince almost has more in common with the Japanese yaoi genre, in which the queer elements are free-floating, without referents, existing not as a subversion but for their own sake, because they are awesome. I wish there was a Western term for that type of story that didn’t come laden with the implication of seme/uke dynamics that accompanies the word ‘yaoi’.

DD: Lately there’s been an increasing interest in erotica published as ebooks. Did you always have the goal of publishing Captive Prince or did this decision come with the expanding audience for m/m fiction?

I only began to think of it as a goal when I started to get requests for a paperback copy of the book from readers, but the growing culture of ebook publishing absolutely helped because it made the goal seem achievable in practical terms.

DD: Why do you think that audience is expanding?

Is it expanding? Or is it that it has always been there and is only now beginning to be marketed to seriously?

DD: Do you think the mainstreaming of fanfiction via Fifty Shades of Grey and other Twilight fanfics that are published as original fic will eventually work to mainstream slash fanfiction and queer erotica, or is that asking too much of mainstream readers?

I don’t think it’s asking too much of mainstream readers. I think that fanfiction readers are mainstream readers. There is even a model for it: In countries like Japan, [the classic yaoi] Ai no Kusabi… is not only commercially published, it has two spinoff animes.

In the West for whatever reason those kinds of queer creative energies have been largely channelled into fanfiction, rather than into a robust commercial market of original work. I am a huge advocate for fanfiction and I see the fanfiction community as a positive creative space. At the same time, I would love to see the rise of an equivalent original market that pays its authors and can take its place on commercial bookshelves, in a way that fanfiction cannot due to its copyright implications.

DD: Have you ever written fanfiction? If so, what do you think the primary differences are between crafting quality slash and quality original fiction?

Yes, I wrote fanfiction for years, from the age of about 15. I don’t place one above the other, but my experience is that original fiction is much more difficult to write than fanfiction, because you are required to do much more, both imaginatively and technically.

The three primary requirements of original fiction absent from fanfiction are: firstly, the ideas work, creating original characters, dynamics and setting. Secondly, the technical mechanics of exposition, how to give information about what you have created to the reader. Lastly, investing the reader in what you have created, how to make the reader care about these characters, the world and its stakes. In fanfiction, those steps are skipped: The characters are pre-existing, foundational exposition is not required, and the reader comes to the story already invested in the characters and what is going to happen to them.

When I first started writing original fiction, I was frustrated by the way that I felt that what I was producing was at a much lower level than my fanfiction. I came to understand it this way: every writer has a finite amount of things that they are capable of doing in a story. If you are capable of doing five things, and then you lay them on top of the 21 things that J.K. Rowling did in Harry Potter, you have a story with 26 things in it. Or to put it another way, Rowling’s groundwork frees the fanfiction writer to use their skills enlarging or improving her world, rather than expending those skills simply building it.  In the past I had frequently read fanfiction and thought, ‘This is better than the original!’ It was humbling to learn why that could seem to be the case, and to face my blank first page and realise that this was going to be a story of only five things, unless I started learning how to do more.

DD: The characters of Captive Prince are often prized for their nuance and the way you develop them over time. Did you know where you wanted to take them when you started or did the characters reveal themselves along the way?

I’m a compulsive planner, I knew everything in advance. But I did write a truly awful first draft of about 20,000 words with a different version of Laurent. Coming from a fanfic background in which characters are fixed, I didn’t understand that you can—and sometimes have to—draft and redraft characters in order to make them work within a narrative. Laurent was the final puzzle piece. Once I had him, I had everything.

DD: In this age when publishers emphasize branding and social media, you’ve built up a loyal fanbase over the years without really doing a lot of that at all. What’s the secret?

I’m not certain! I wonder if Captive Prince filled a niche. It is story-driven adventure romance with stuff in it like high id and battles and court politics, and there aren’t necessarily a lot of stories occupying that space.

I also wonder if there are times that original fiction can offer something that fanfiction cannot. I am thinking mostly in terms of stakes. The characters of fanfiction are in some sense ‘safe’, nothing can really happen to them, or if it does, there is a safety net, because the fanfiction is a version that doesn’t affect the original source. Similarly, there can be fewer reveals, less true surprise because so much of the backstory is known from the source material. Whereas in original, everything is at stake, and everything is new, fresh, exciting, because this is the story, this is it. I think if utilised fully, that can make original m/m feel very dynamic.