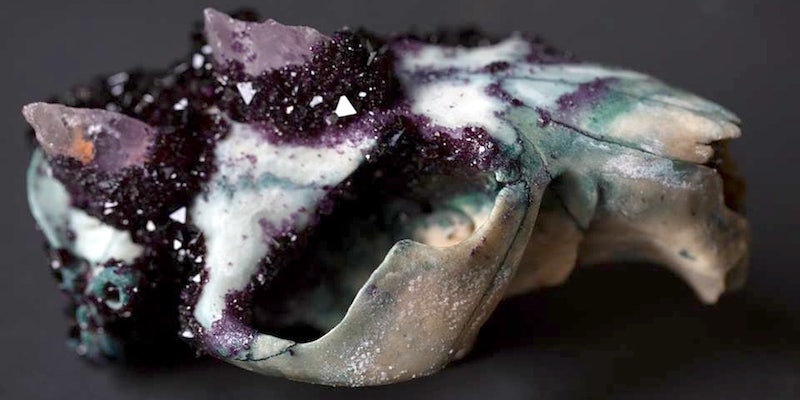 Behind the beautiful and macabre art of Tyler Thrasher

Tyler Thrasher is taking taxidermy to the next level.

Though not a taxidermist himself, the 22-year-old Tulsa, Oklahoma, native is taking found cicadas and animal skulls and using chemistry to grow crystals on them. His art walks the line between the macabre and the beautiful with ease, and the art world is taking note.

I've been growing these crystals for a while- inspiring my new art piece! Crystal covered cicada shells! I feel like @jawcooper would appreciate this!

“It’s a very weird fulltime job,” Thrasher said. “Whenever someone asks me what I do, I can’t just tell them, ‘I crystallize dead shit.’”

Thrasher thinks of himself as an artist and even something of an alchemist. But he doesn’t quite see himself as a true scientist yet. For that, he would need a laboratory and access to a wider selection of chemicals. Right now he buys some of his chemicals from international sellers on Ebay. Others he gets at regular brick-and-mortar stores.

Thrasher’s never been much for social media, he told the Daily Dot. But a friend of his convinced him to start Instagram and Facebook pages to promote his work. It wasn’t until he reached out via Facebook to artist and illustrator, J.A.W. Cooper, that he started to gain notoriety.

Cooper’s work is similar in some ways. It mixes natural elements with macabre themes. Soon after he reached out to her on Facebook, she posted about his artwork to her own social media accounts and the followers started pouring in.

“If you want your stuff to get noticed, you have to kind of appeal to bigger people because at some point your friends and family don’t cut it anymore,” Thrasher said.

Now, about a year after he started crystallizing, he’s up to well over 23,000 followers on Instagram.

For a couple of months I've been wanting to take my work in a more sculptural direction, something that could imply a primordial history and a very vague story and narrative. Something that doesn't directly reference alchemy, but rather objects that would shape and define alchemical notions. This is a REAL horned beetle, mounted in cement with real Quartz imbedded into the cement, which I then took and crystallized, piece by piece. This piece will be available at my upcoming show "Prima Materia II" this December 4th at Needful Things in Tulsa OK (@tulsaodditiesneedfulthings ) Email me at [email protected] to inquire about purchasing and reserving this piece. #tylerthrasher #tulsa #crystallized #crystallizedinsect #beetle #alchemy #chemistry #curio #quartz

He says that if he can get the funding and a place for it, he would be interested in crystallizing an entire tree, or perhaps a skeleton.

But in the meantime, Thrasher will continue caving, watching anime, and acting as a dungeon master in Dungeons and Dragons.