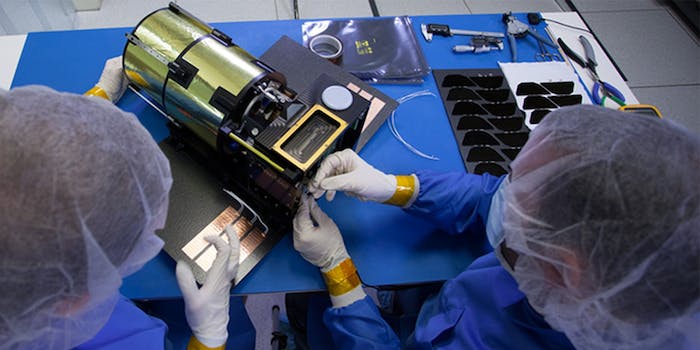 More than $1.5 million in Kickstarter funds may have exploded along with the Antares rocket on Tuesday.

Tuesday’s Antares rocket explosion was a huge setback for the NASA space program—but it may prove disastrous for a crowdfunded space telescope.

Planetary Resources, an asteroid mining company, Kickstarted $1.5 million last year to build a crowd-controlled space telescope known as the Arkyd. Billed as “a space telescope for everyone,” the Arkyd will allow users to access and control it to take custom photos of space. (You can even use it to take a selfie from space.) The project received enthusiastic support from notable nerds like Hank Green and The Oatmeal.

But on Tuesday, backers of the project, as well as the team of engineers and astronomers at Planetary Resources, saw their astronomy dream literally go up in smoke as the Antares exploded shortly after takeoff.

Less than 3 minutes to the launch of #ARKYD A3!! We’re excited!! http://t.co/SAuJe6qggN

The rocket, which was headed for the International Space Station, was carrying a variety of commercial and research equipment, including spy equipment, student science experiments, and a small version of the Arkyd—the first test run of the telescope and all its equipment.

@Oatmeal Oh no. I backed the #Arkyd project too. My heart is breaking for @PlanetaryRsrcs right now. I didn’t know it was on #antares

In the wake of the explosion, the project’s Kickstarter page was quickly flooded with outpourings of support and questions about what would happen next. Though Planetary Resources didn’t immediately upate, it did post reassurances to Twitter:

RT @interplanetary: Cheer up everybody – A3 was just a robot! We are making more. #LiveToFlyAnotherDay #ARKYD @PlanetaryRsrcs

It also issued a statement to Geekwire, promising to continue development and assuring readers that they were still on schedule:

Our first technology demonstrator, the Arkyd 3 (A3), was onboard the ORB-3 when the Antares rocket suffered a catastrophic failure seconds after launch from Wallops, Virginia on October 28, 2014.

As this launch failure and history have demonstrated, spaceflight is inherently risky. The A3 is the first example of our strategy to “use space as our testbed,” and to tolerate failures by building success into the development path. With the A3, the Planetary Resources’ team achieved most of our objectives when we delivered the spacecraft to the launch integration site; and for the past few months, we have been hard at work on our next vehicle, the Arkyd 6 (A6).

Our development schedule has not been affected, the A6 is Planetary Resources’ second demonstration vehicle in our spacecraft program. We have contracted with Spaceflight Services, Inc. to include the A6 in a rideshare configuration on an upcoming U.S. commercial launch vehicle, currently scheduled for launch in Q3 2015.

In other words, it’s business as usual for the team, which should be good news for the 17,000 backers who just want their space selfie. Onward!