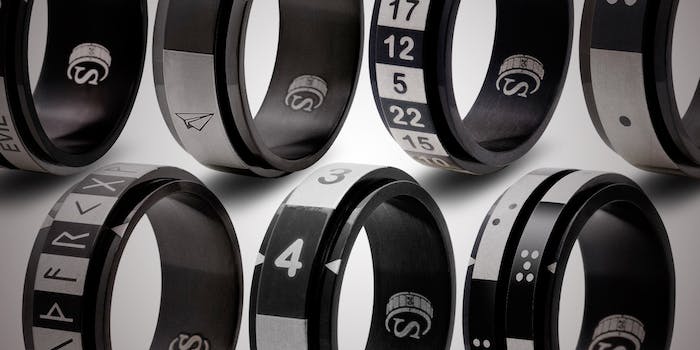 These inventive rings can stand in for tabletop game dice

Who needs dice when you can decide your fate with a quick spin of a ring?

If you want to change things up during your next tabletop game or just want to stop carrying your dice everywhere, there’s a fashionable way for you to put a new spin on how you roll in your next session with no dice required! You can swap out everything from your d20 to your d4 with one of CritSuccess‘ unique dice rings.

The rings display laser etched patterns and feature an inner ring with an outside ring that spins to land randomly on a result. The company has rings with numbers that match the dice you’d need for games like Dungeons & Dragons with d4, d6, d8, d10, d12, and more options so instead of rolling dice you can just spin the ring. CritSuccess’ interesting ring designs don’t solely focus on replacing dice either. It also offers other options such as an alignment ring, playing cards ring, clicking counter ring, and a yes or no decision ring.

According to COO Jesse Davis, almost all of the available styles on the CritSuccess website are from the initial campaign to launch the creative rings. He first became involved with the company when he was brought on to help with the Kickstarter campaign after the two cofounders came up with the initial idea, the result of one wearing a spinner ring and the other commenting that it would be great if they printed numbers on the ring so it functioned like dice. Davis told the Daily Dot they were blown away by the response to the crowdfunding campaign where they raised $344,069, originally asked for just $23,000.

When developing the ring designs, CritSuccess kept backer feedback in mind. Davis highlighted the rock paper scissors lizard Spock ring as an example of this, where just looking at the design helps people remember what beats what in the game.

“The ring will tell you no matter what you land on what beats it and what it beats,” he said. “When you look at that ring, whatever you land on the two symbols above it beat it and the two symbols below, it beats. So that was set up pretty intelligently in my opinion with feedback from the community.”

While they haven’t added new styles yet due to wanting to clear out some inventory first, Davis said they continue to get feedback on their website about styles customers would like to see. He says it wouldn’t be hard to pick out what the next rings would be just from what he’s seen in emails.

CritSuccess also talks to customers and sells its rings at various conventions. The company tries to attend a little more than a dozen a year including Gen Con, PAX Prime, PAX East, and Dragon Con. In addition to conventions it sells through ThinkGeek, which recently started to sell CritSuccess’ d20 and clicking counter rings.

The rings are definitely a fun idea and seem to spin rather well. According to the dice product descriptions, the rings are supposed to be statistically fair rolls so they really can take the place of your dice. Of course if you prefer dice, you can always just wear them for fun. They could also work as regular worry rings or be used for other pursuits. Who knows when you might need to spin for a critical hit at work one day?

You can see a few more of CritSuccess’ rings below and the rest on their website.