McCall's, Simplicity, and Jo-Ann's are finally getting in on the cosplay boom.

Cosplayers have long been on their own when creating costume replicas and remixes for their favorite characters. That often meant doing everything from finding the right fabric to fashioning a custom pattern—with lots of trial and error.

But that’s starting to change. Companies are creating products with cosplayers in mind. Considering all the amazing cosplay that’s been created over the years, it seems almost hard to believe that it took companies this long to realize there was a market of cosplayers waiting.

The potential became clear to Simplicity Patterns when it took a visit to New York Comic Con. According to Simplicity consumer services assistant Tiffany Pegram, who told the Daily Dot she’s been cosplaying for the last 16 years, a bunch of their designers went to the convention for the first time a few years ago.

“Their general consensus was, ‘Hey, all these people are making awesome costumes, maybe we should give them patterns for it.’ So it’s been an ongoing process and an eye-opening experience,” she said.

The costume patterns section of Simplicity’s website includes cosplay mixed with what customers might think of as more Halloween-style designs. Some of the looks are licensed by brands like Marvel and DC Comics, with one of Simplicity’s latest releases taking inspiration from the DC Comics Bombshells costumes of Wonder Woman, Batgirl, and Supergirl. The company also works with cosplayers and designers directly to create its patterns, including Effy Sews Cosplay and LoriAnn Costume Designs, who Simplicity often highlights on its YouTube channel. According to Pegram, the company keeps an eye on the cosplay community to see what it’s looking for, making, and using. 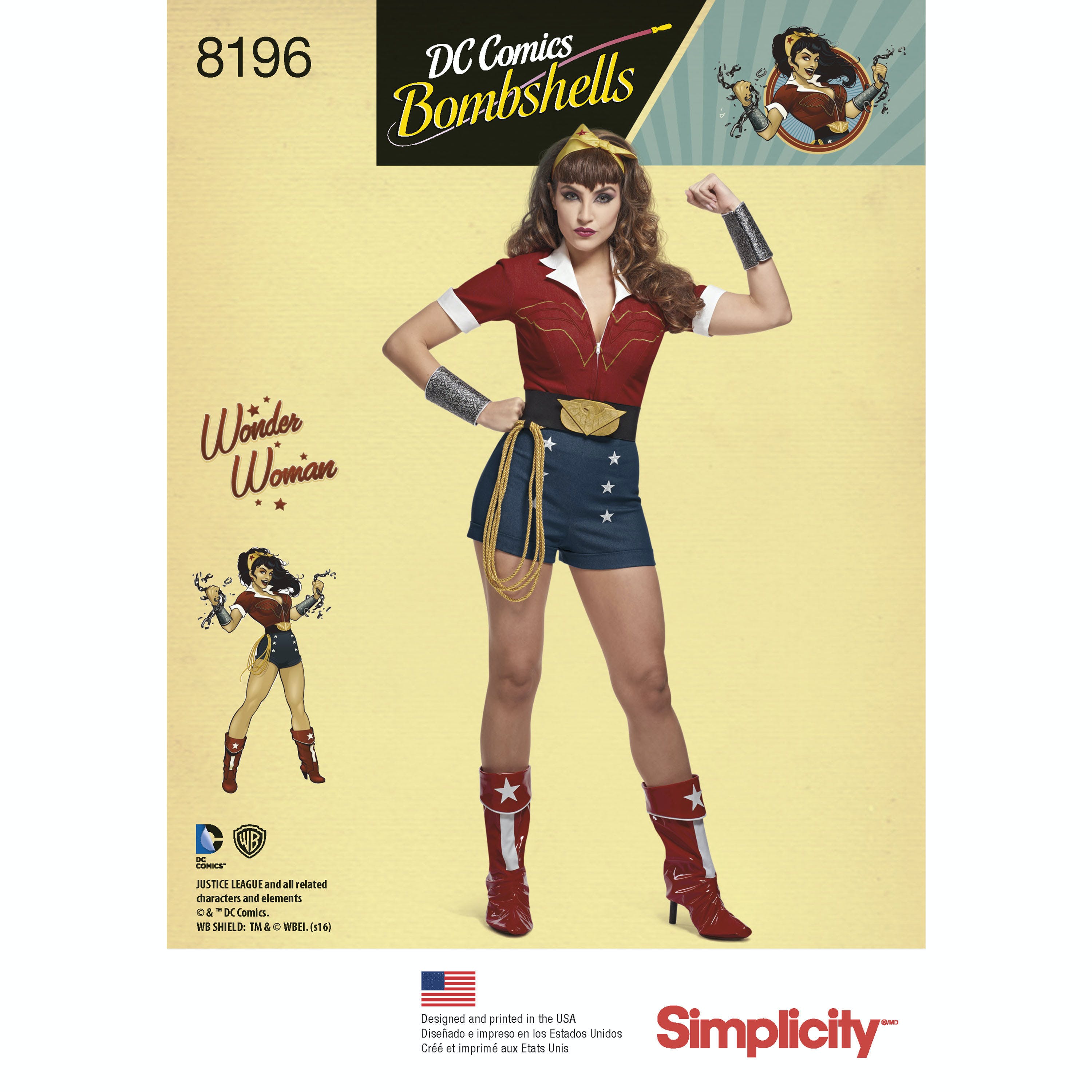 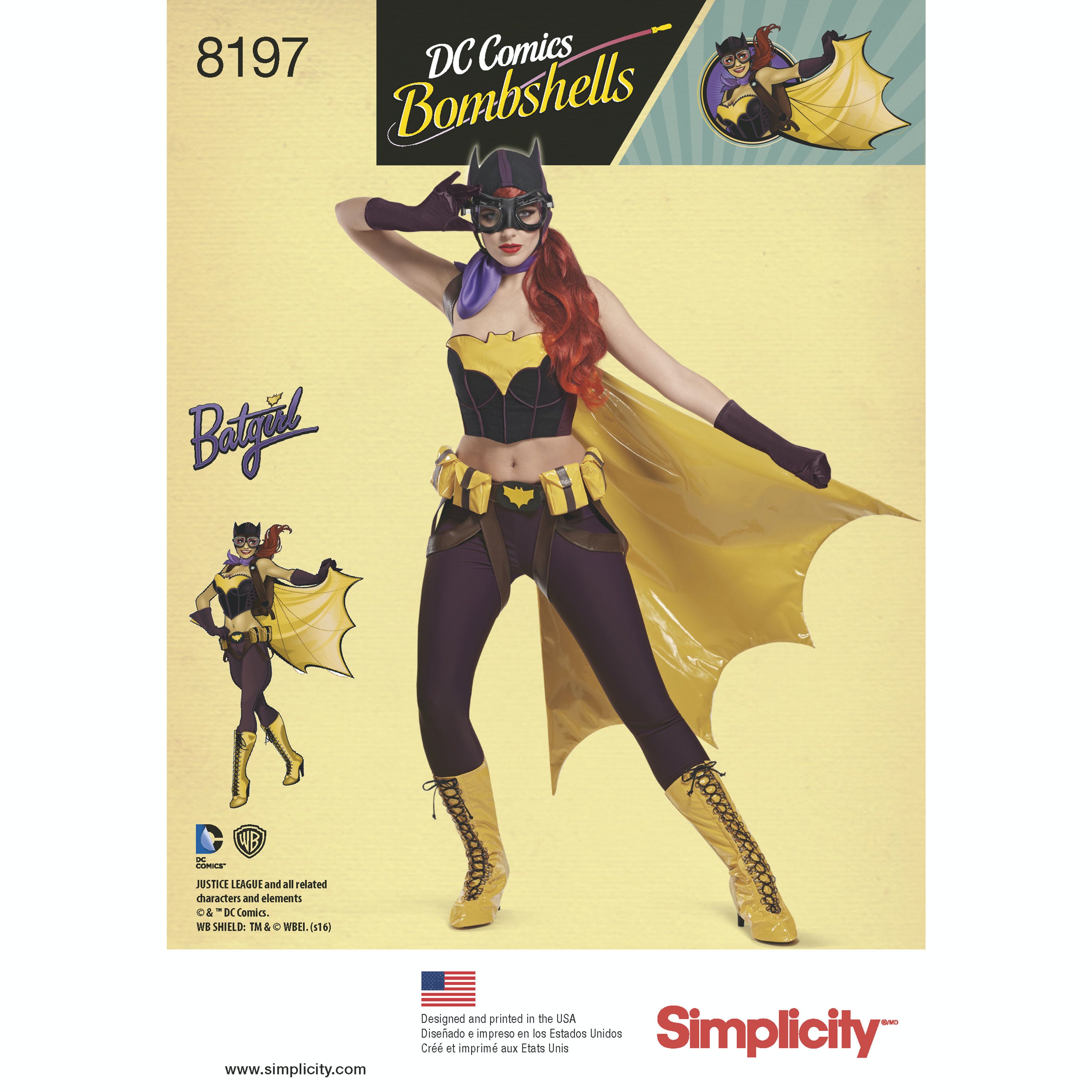 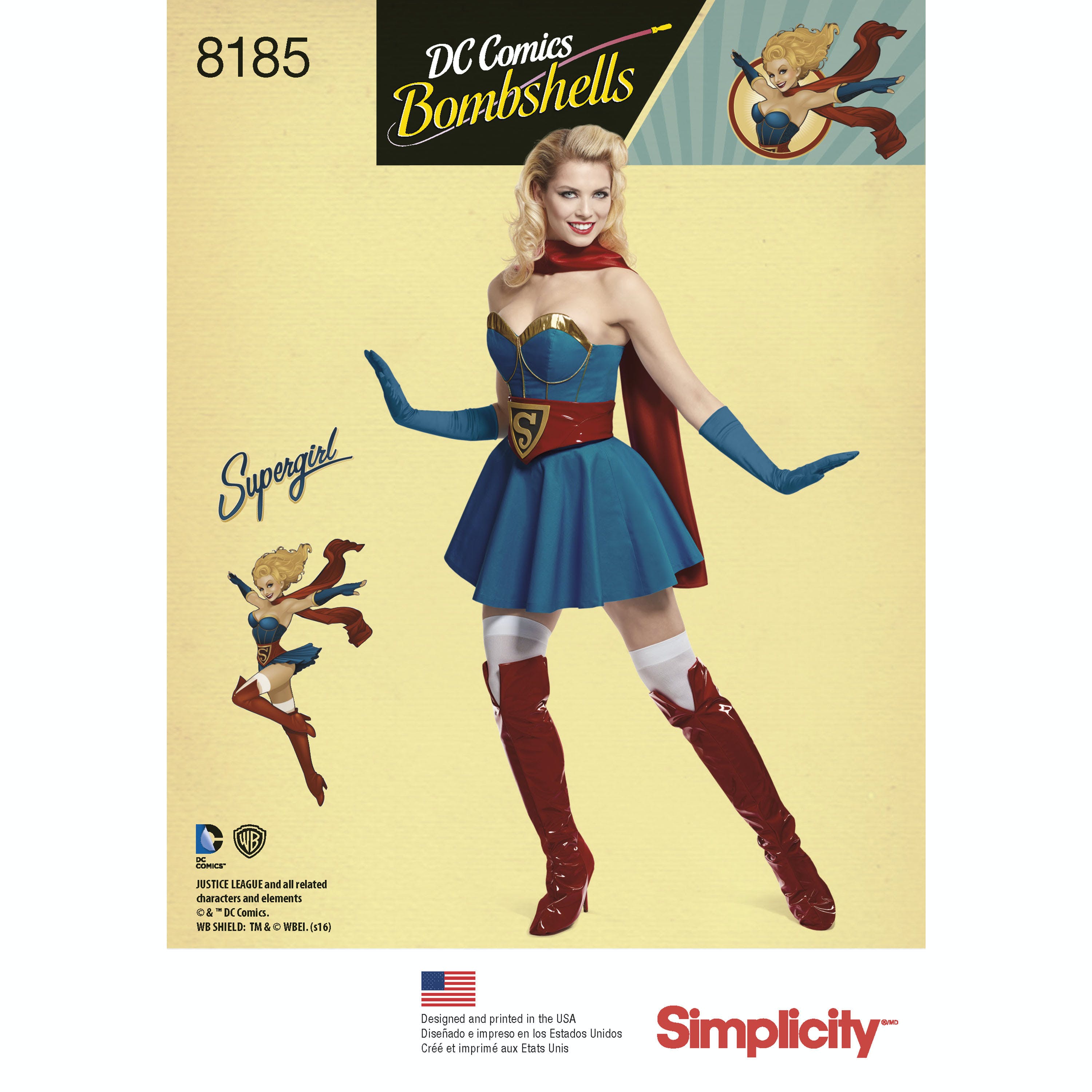 Simplicity isn’t the only company to collaborate with cosplayers as it expands into this market. The McCall Pattern Company is also working with notable members of the cosplay community and created a specific website and brand collection for cosplayers called Cosplay by McCall’s. According to vice president of marketing Janet Wolf, the line started as a result of a comment from a cosplayer working in one of their plants where McCall prints and distributes regular sewing patterns. The employee mentioned to the president of the company who was visiting the plant that McCall’s should do something with cosplay and even created a PowerPoint presentation with her daughter, another cosplayer, that interested both the president and marketing department. The department set up a booth at New York Comic Con, and with the positive feedback they decided to launch a new brand of sewing patterns specifically for cosplayers.

Wolf told the Daily Dot they’re careful not to present themselves as experts in the area because they’re not. As they researched cosplay, they realized they could do some designs in-house, but some just didn’t compare to what veteran cosplayers had developed.

“As we follow what’s going on in the cosplay world, we see who are the folks out there who are really expert at it and are doing amazing, very creative, very beautiful work, and we reached out to some of them. So some of the designers you see we’ve now licensed to create products for us,” Wolf said. “We’ll continue to do that because they’re amazing and the things that they’ve come up with so far, the things that we have in the pipeline for some of them, are just great and things that we would not have known to come up with on our own.”

The branded line includes nine patterns so far and will continue to have patterns added to it almost every month for the rest of 2016. Wolf said McCall’s hopes to cover all genres eventually, from anime to steampunk, and release accessories, too. In addition to that collection, the Cosplay by McCall’s website also highlights other patterns that might be useful to cosplayers like bodysuits and coats. 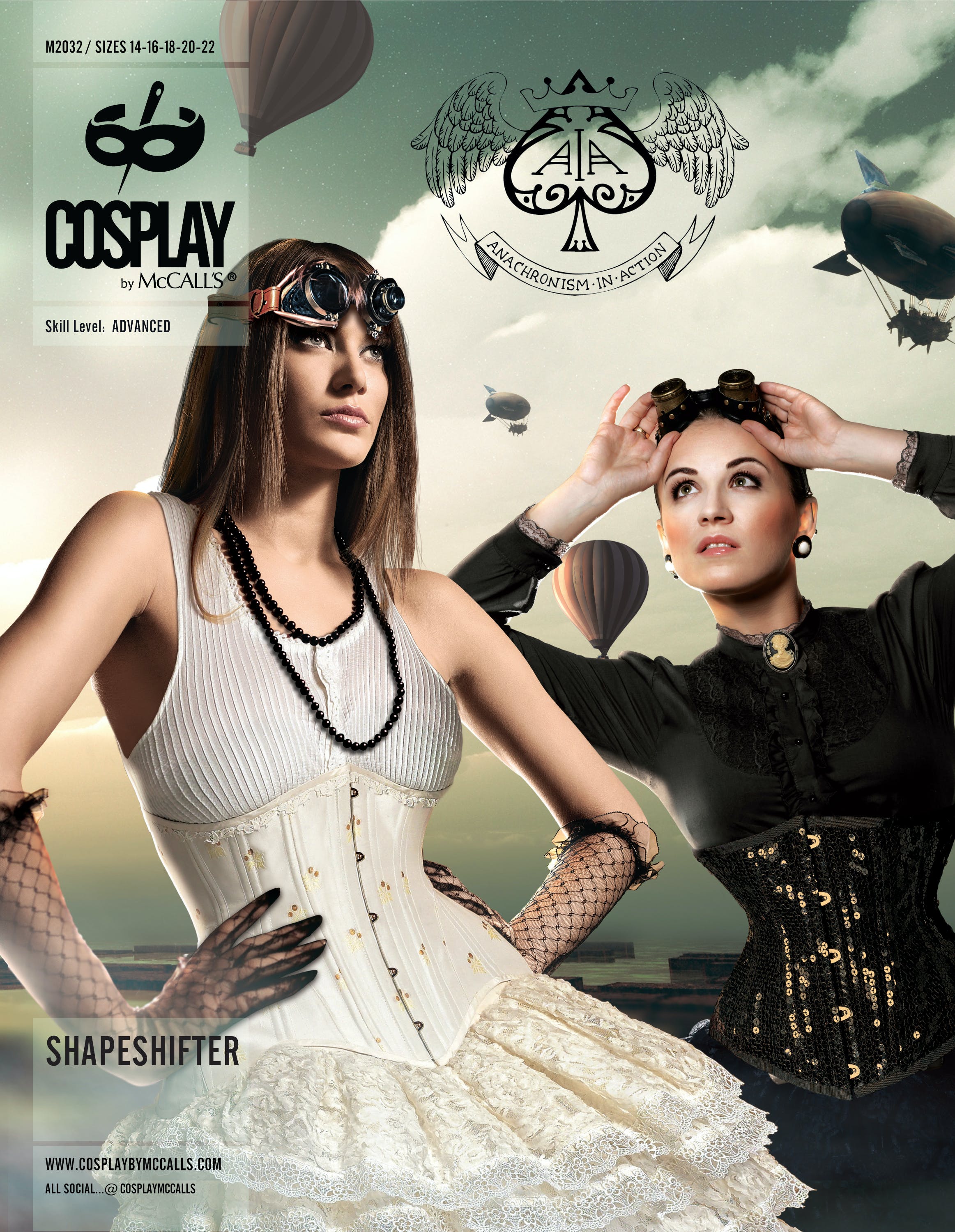 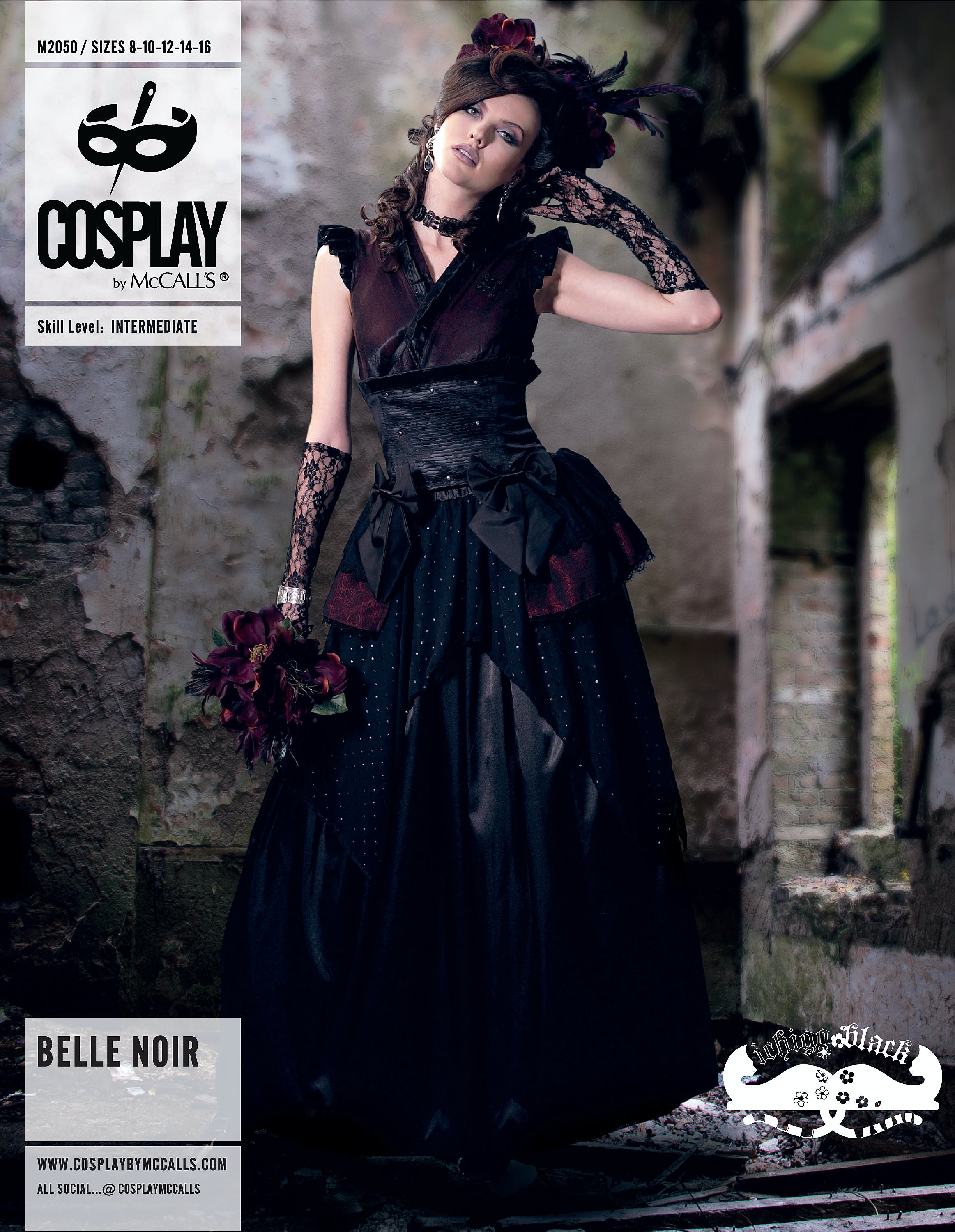 McCall’s features patterns and designers on its blog. On the branded line, McCall’s has so far worked with Ichigo Black and Kelly Cercone of Anachronism in Action, who won last year’s Her Universe Fashion Show and designed a Star Wars: The Force Awakens fashion line with Ashley Eckstein and fellow winner Leetal Platt for Hot Topic. Cercone has two patterns in the Cosplay by McCall’s branded collection, an underbust corset and an overbust corset each with different style options. Cercone reached out to McCall’s after seeing the company release a bodysuit pattern by fellow cosplayer Yaya Han.

“Prior to the collaboration with Yaya Han, I always just assumed they made all of their own patterns in house. They didn’t contract out to other designers,” Cercone said. “But when I saw that they were willing to do that, I was like ‘Oh, this is perfect. I already have this collection of patterns, which I developed specifically for making cosplay corsets for clients’ so that’s what I pitched to them.”

When she was growing up and learning corset making, Cercone didn’t see many modern options from pattern companies. That’s why she made her own in the first place. With those patterns, it was easy for her to send them to McCall’s with samples.

Cosplayer Yaya Han became involved with McCall’s when the company reached out to her. Her first design, the bodysuit, was released last spring. Now Han has a number of patterns available at McCall’s which then introduced her to yet another opportunity by connecting her with Wyla and together they created a line of fabrics for Cosplay Fabrics.

“It was sort of a whole wide new world for me to work with Wyla, and all of a sudden be given this freedom to design fabric that I thought would be the most useful,” Han said. “I didn’t go to school for textiles; however, over many years of working with fabrics I sort of have the knowledge [of] what works and what doesn’t work for specifically costuming…”

Han said she found out that Jo-Ann Fabric and Craft Stores was interested in carrying the line about two to three months into the process. 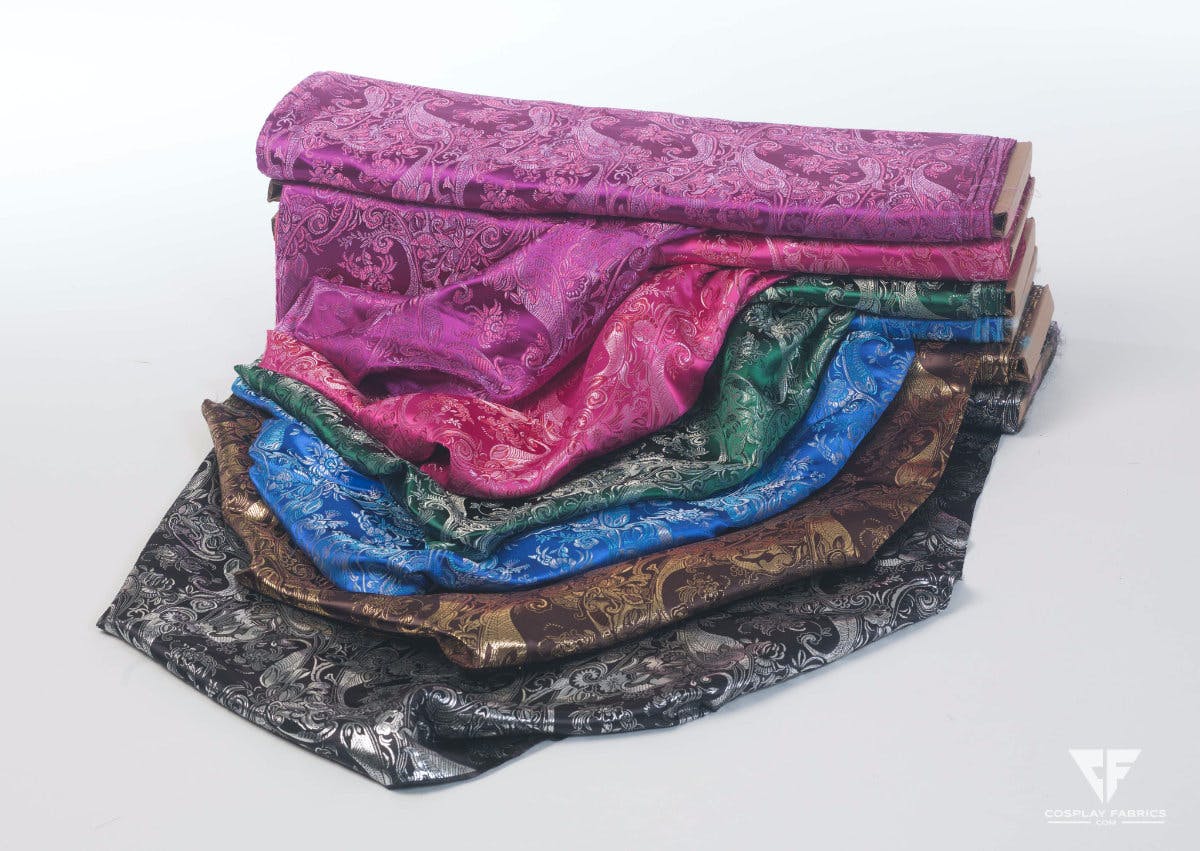 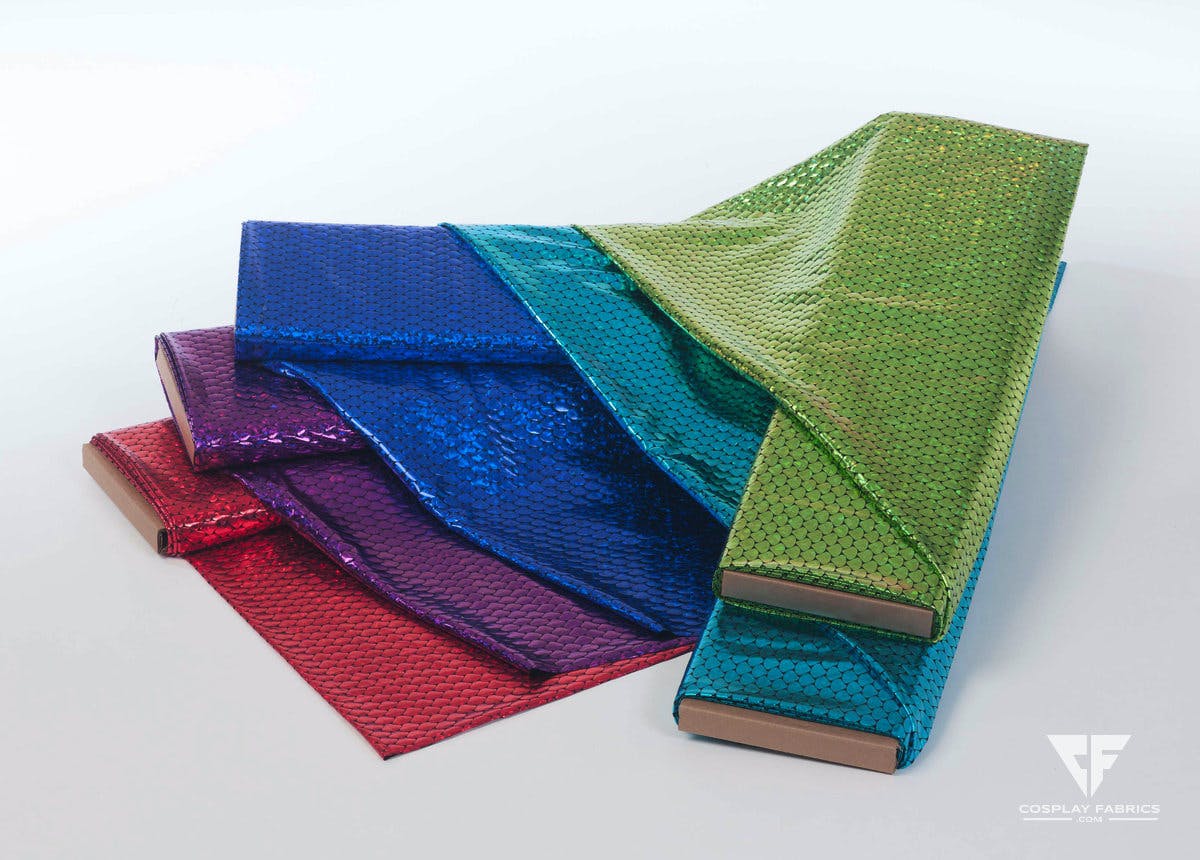 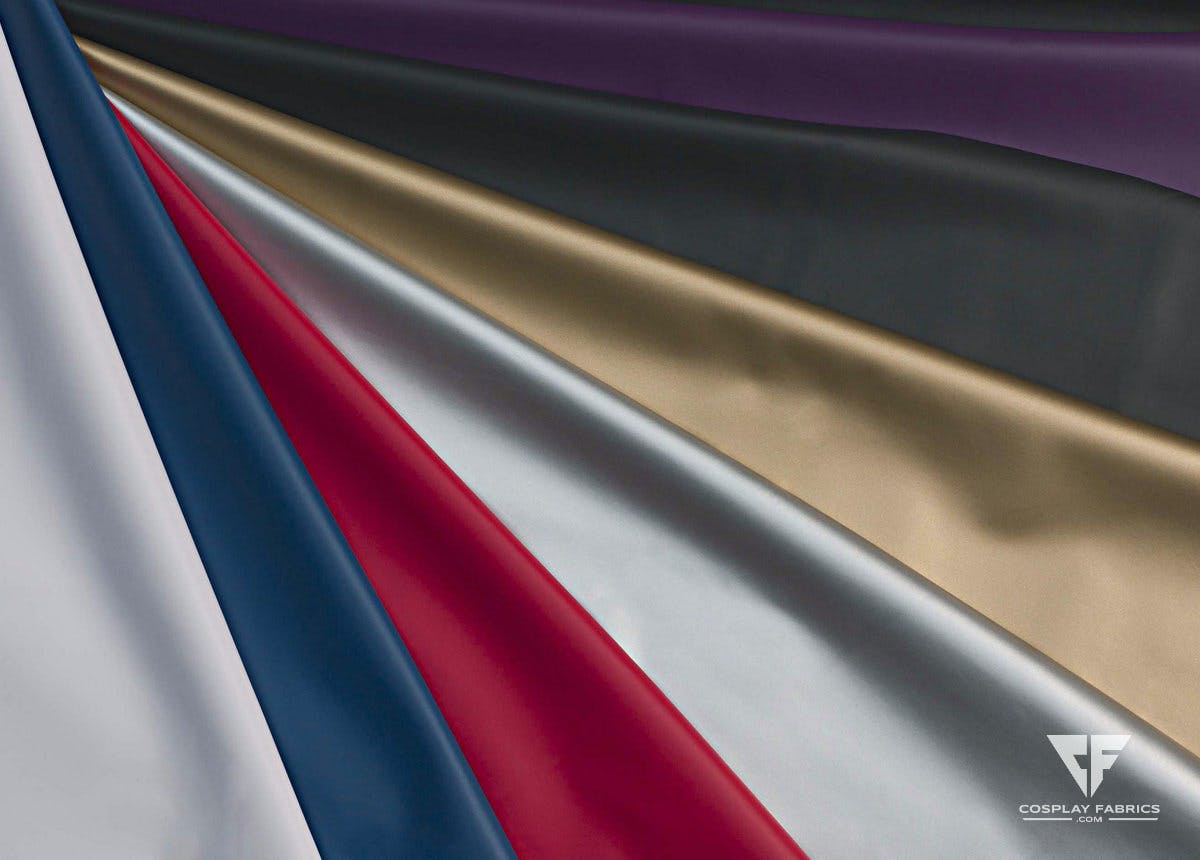 Released this spring, the Yaya Han line features more than 75 fabrics including a range of materials and colors.

“For the first time I realized that my fabric hoarding is actually incredibly helpful because I was able to cut over 30 swatches from my fabric that I’d collected in 15 years and show them exactly ‘This is what I like about this, this is what I don’t like about this fabric, and this is what we need to make,'” Han said. “I gave them certain fabrics that I labeled ‘unicorn’ like these fabrics I found once however many years ago [and] I’ve never been able to find [them] again, can you make this?”

From that wide range, they narrowed down the fabrics to include in this first collection, and Han said she has a lot more ideas. This is the first time Jo-Ann Fabric and Craft Stores has done anything with cosplay-specific branded products according to spokeswoman Shauntina Lilly. Lilly told the Daily Dot in an email that launching a cosplay fabric line was a natural step considering how many cosplayers get their supplies at Jo-Ann stores.

With so many options being created and marketed to cosplayers now, it seems like this is only the beginning. Han thinks the increase in what’s available now aimed specifically at cosplayers is great, and said she was hoping for healthy competition.

“Everybody getting in and companies—big companies in general—realizing that there’s a market in cosplayers, but also that cosplayers represent the future of arts and crafts,” Han said. “It’s an artform that we’re now practicing, and we’re practicing very well, and some of us are very dedicated to. I think it’s sort of really refreshing the whole market of arts and crafts.”

“I love that you can get a wider range of fabrics at Jo-Ann’s now,” Cercone said. “The town that I grew up in, the only real fabric store was a Jo-Ann’s, and prior to the cosplay line I could never get coutil there, and that’s the best fabric to use for corsets. So just accessibility to materials is great.”

It was easy to find fabrics as well as patterns from McCall’s and Simplicity at a Jo-Ann store we visited in the suburbs outside New York City. There the items were grouped together in what felt like easy one-stop displays for cosplayers who want to see products in person. 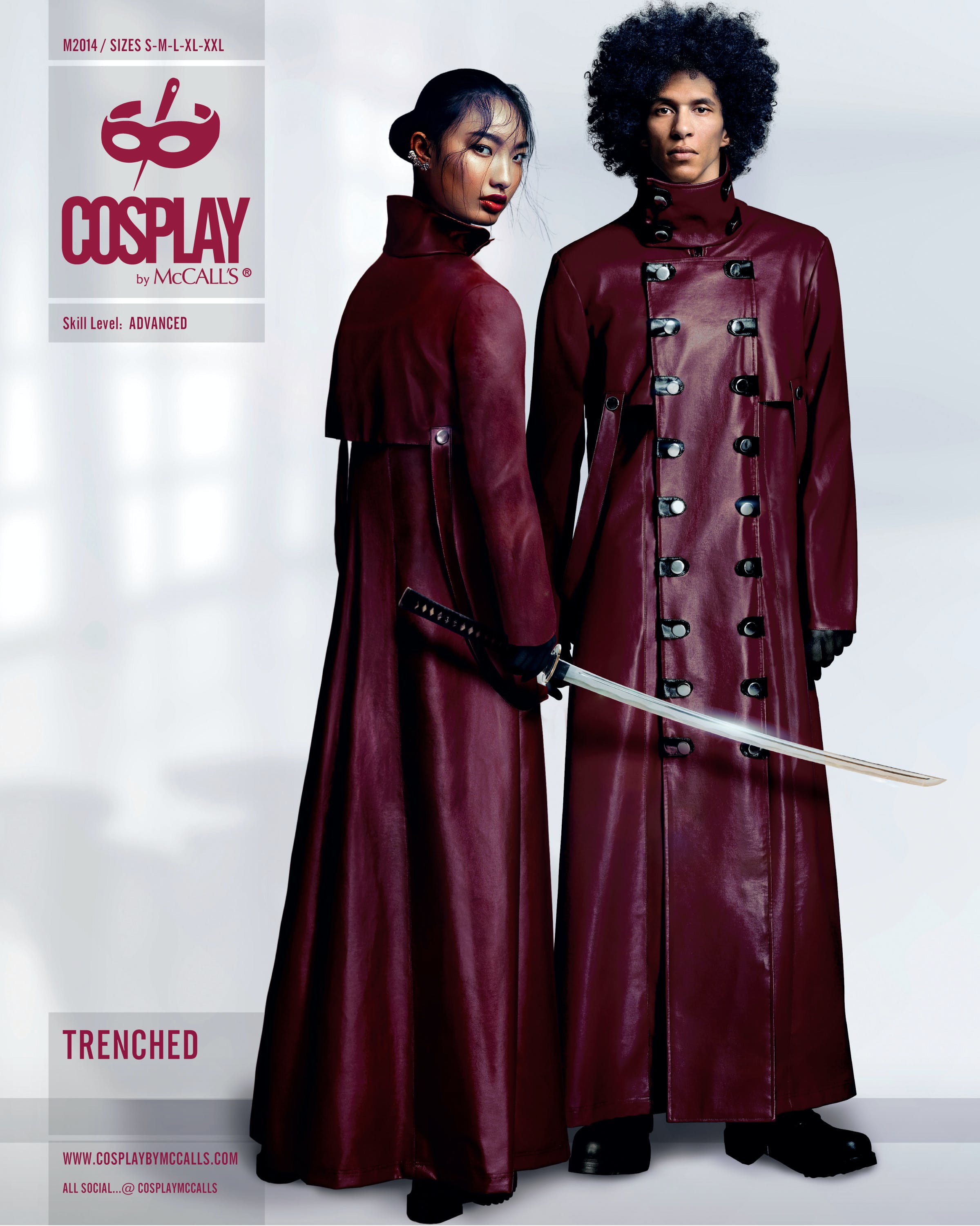 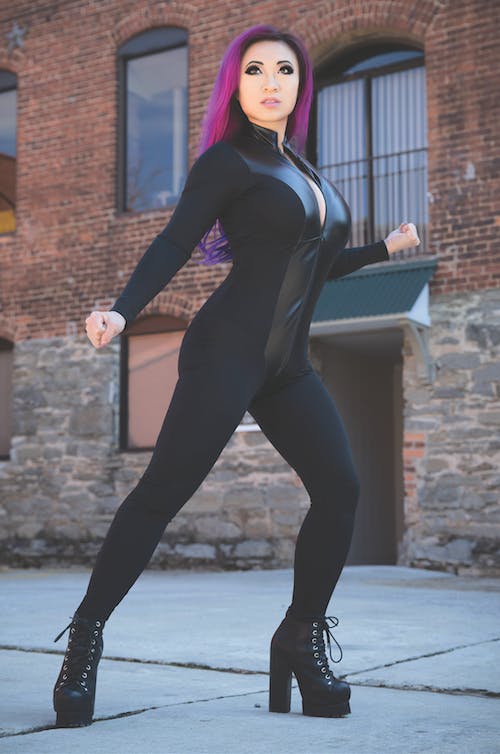 When it comes to patterns, Monika Lee, who has cosplayed for about the last 10 years, thinks these options are a good idea for beginners. She’s never used cosplay-specific patterns or found a use for them yet. She’s always preferred to draft her own or alter existing patterns.

“Over time, I’ve made a collection of patterns that I use if I’m doing something generic, but I tend to draft my own because it’s difficult to find something close to what I’m looking for and I tend to be pretty particular,” Lee told the Daily Dot in an email.

While cosplay patterns can be good for those starting out, Lee also urges people to not let patterns define how they make a costume: There is no one right way to do it, and experimenting is often part of the process.

“Try experimenting with draping material, making your own pattern and creating mock ups, or even taking these cosplay patterns and altering them to your needs. And if you haven’t made your own costume yet, these cosplay patterns can be a great starting point, but don’t be afraid to grab some other non-cosplay related patterns that could be similar to your costume! Experimenting and playing around with these will help you learn more in creating a costume,” she said.

Lee thinks cosplay being acknowledged “in business terms shows the evolution of cosplay into an industry.”

“With businesses dedicated to selling cosplay specific wares, we’ve seen this transition with fabric distributors and major pattern companies taking cosplay seriously enough to create a viable business,” she said. “When I first started, the fabric and sewing options available were severely limited and now there are sewing patterns dedicated specifically to cosplay—that’s pretty mind blowing. If anything, I think this type of growth should be encouraged because it means welcoming more people into the community and really spreading the knowledge of craftsmanship in cosplay.”

Pegram started out using patterns for her cosplay and then moved away from them. From her view, she’s seen a shift in their use with cosplayers.

“A lot of cosplayers don’t really think about patterns much these days because we’re so used to people not really having anything for us. A lot of people including myself who started with patterns when they were just starting out in cosplay and had this sort of segue away from using patterns into drafting their own because there wasn’t anything out there to really use in a pattern,” Pegram said. “It is so exciting nowadays to see people come up to us and go ‘oh my god, you’re now making patterns for these things. I don’t have to draft everything by scratch now’ which is nice to hear people telling us give us more.”

For now it appears the options for the cosplayer community can only grow. More patterns are on the way from both Simplicity and McCall’s and Han said Jo-Ann’s will be adding new fabric to the current Yaya Han line later this year with a second collection set for release in 2017.