How to cosplay as characters from the new ‘Ghostbusters’

Skip the jumpsuit, and take your 'Ghostbusters' look to the next level.

Ghostbusters costumes are going to be huge this year, and if you want to wear one of the regular uniforms, they’re easy to find. There’s a variety of Ghostbuster jumpsuit options from low-budget to “sexy” to pretty darn realistic, accompanied by Ghostbuster boots and a proton pack. You can even get a uniform for your dog.

That being said, the popularity of Ghostbusters costumes means you may want to up your game. And that means dressing like one of the individual characters—which is also an excellent choice for everyday cosplay, because those outfits can be put together from normal clothes.

Just steer clear of the unofficial Ghostbusters Halloween costume character wigs. They are… not a good idea.

Kate McKinnon‘s Jillian Holtzmann is undoubtedly the most recognizable character in the movie, thanks to her confidently weird fashion sense. She’s also a great choice for everyday cosplay, because your outfit doesn’t need to be precisely accurate to work. If you’re wearing oversized overalls, a leather jacket and yellow goggles (or a waistcoat, baggy suit pants and yellow glasses), you’ll pass. 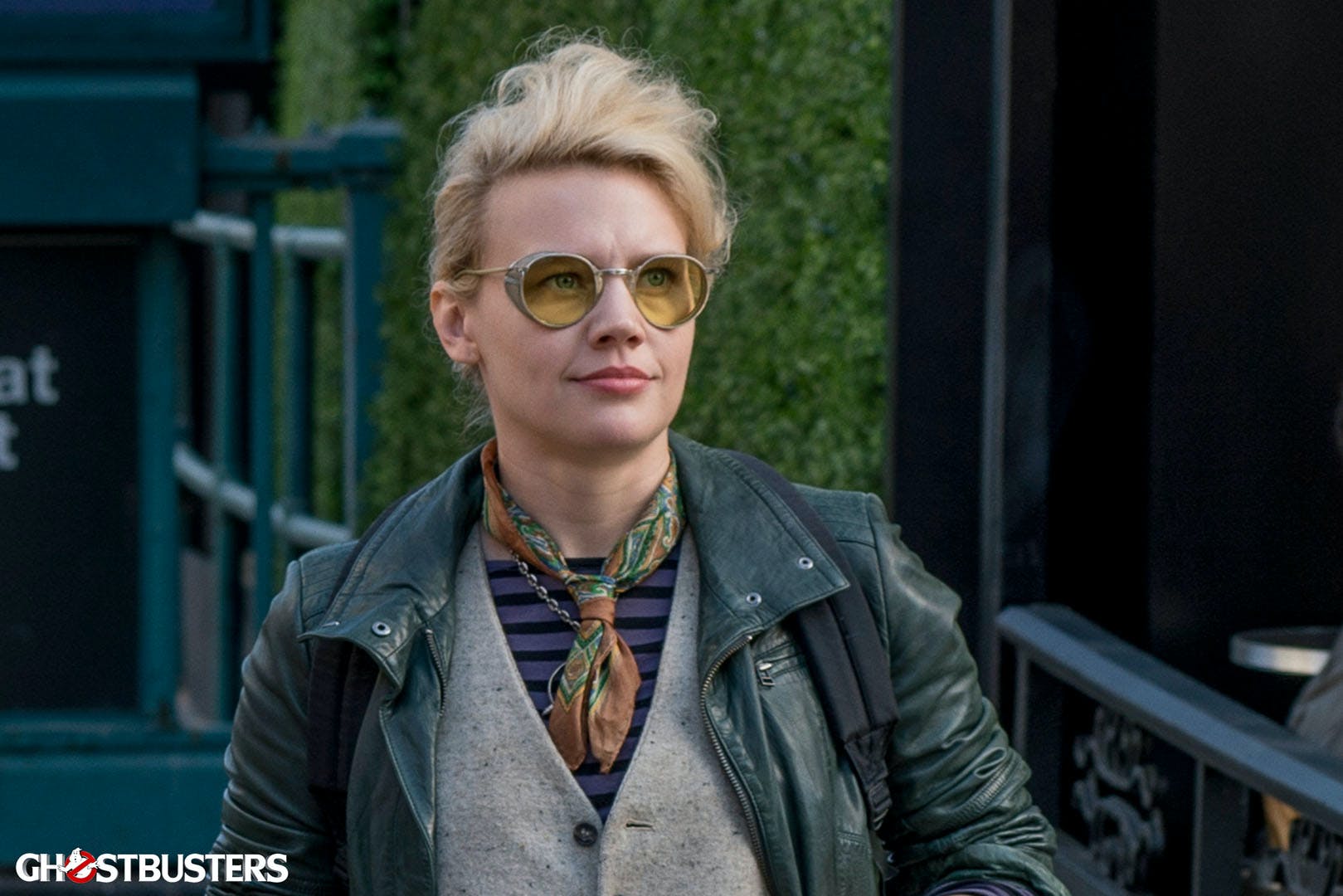 Holtzmann has an awesome selection of eyewear throughout the movie, including functional yellow goggles, shades, and a pair of very stylish glasses that we’ve identified as Sterling 23 Spectres from the eyewear designer O’riginals. Thanks to the surge of interest from cosplayers, they’ve made it clear on the website that deliveries won’t arrive until November—in other words, after Halloween. But if you’re really desperate, you can drop a cool $87 on the blue version and have the lenses switched with yellow glass. 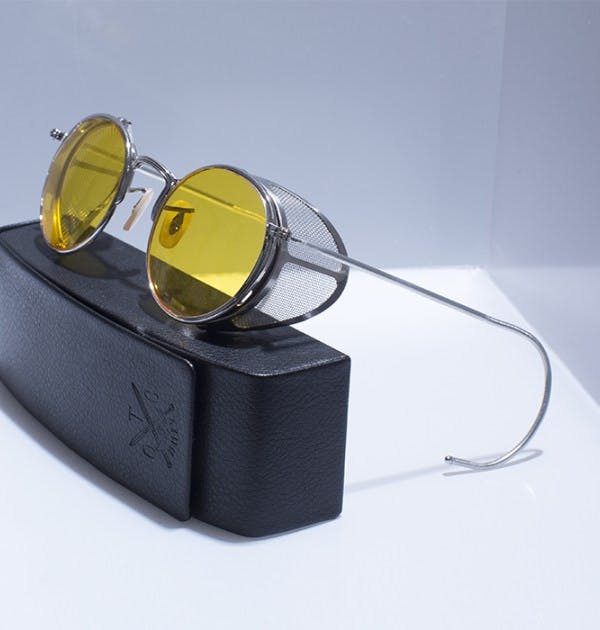 As for Holtzy’s other accessories, we recommend pilfering your local thrift store for small, patterned neckerchiefs and wide neckties, both of which are staples of her wardrobe. One enterprising Etsy seller has started making replicas of Holtzmann’s “screw U” necklace, which you can also make yourself if you have access to a 3D printer.

Patty begins the movie in her MTA uniform, which led us to the discovery that you can’t buy MTA uniforms except through the MTA itself. So if you’re already a New York subway employee, you’re golden. Otherwise, we recommend going for one of Patty’s more casual looks. The key details are a personalized “Patty” necklace and chunky gold hoop earrings.

Patty’s style is colorful but relaxed. In one scene she wears a yellow T-shirt with a palm tree design, and behind-the-scenes photos show her wearing purple and gold high-top sneakers and jeans. We weren’t able to identify the awesome patterned jacket she wears in some scenes, but there’s one costume you’ll definitely be able to recreate at home: a black pencil skirt and denim jacket over a pink patterned shirt.

Erin goes through a transformation over the course of the movie, beginning as an uptight academic before relaxing into her old MIT sweatshirts after she joins the Ghostbusters. But for cosplay purposes, there’s one obvious choice: her frumpy skirt-suits.

Ideally, you want a beige or grey tweed suit with a pleated skirt, although that could be quite expensive unless you’re willing to persevere through a lot of thrift stores. Etsy has a good selection of vintage skirt suits, which are all at least $50 to $100, and there are some plausible options on Ebay, as well. 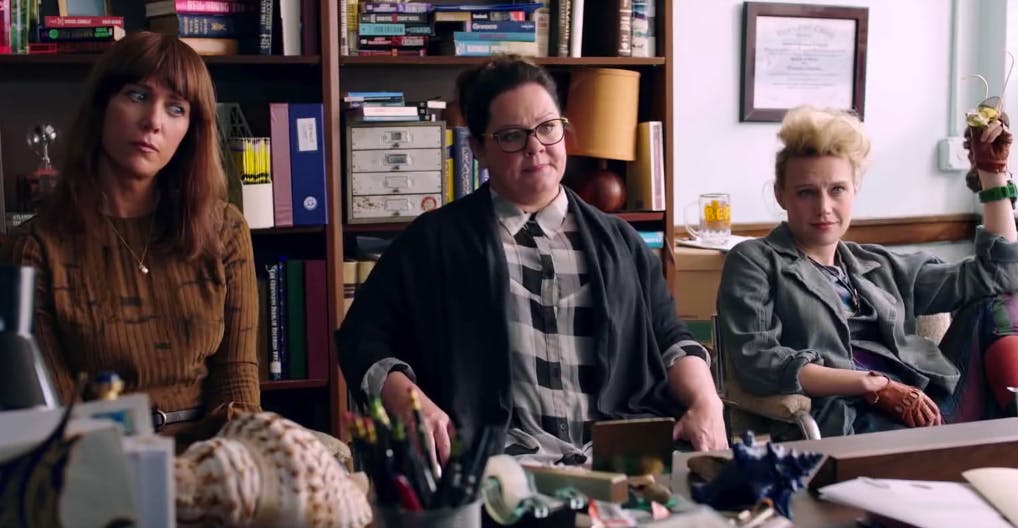 Abby is the most lowkey of the Ghostbusters, style-wise. With a wardrobe of plaid or striped shirts (always buttoned to the collar) and cardigans, an Abby Yates costume runs the risk of not being recognized at all. If you want to stand out as an obvious Abby, we recommend accessorizing with either the helmet she wears in her lab (which would require some extensive DIY), or a proton pack. Or a container of slimy ectoplasm, which could easily become the Mad Max: Fury Road silver edible spray paint of Ghostbusters cosplay.