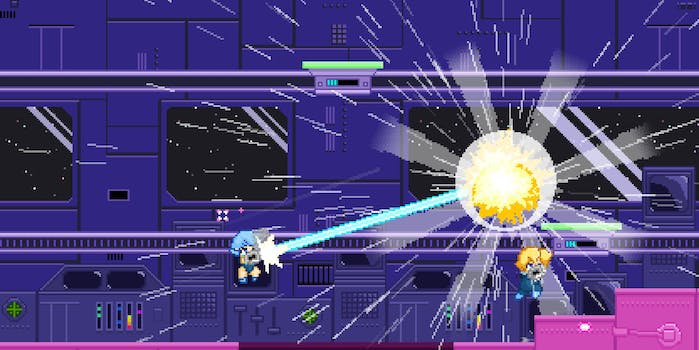 ‘Capsule Force’ stands out at this year’s Rooster Teeth Expo

You can help make this awesome indie game available by voting on Steam.

It’s tough out there for an indie game developer. With so much competition, it’s becoming harder for studios to have their games standout. But Capsule Force, by Klobit, broke through the noise at this years Rooster Teeth Expo in Austin, Texas.

A mix of Nidhogg and Towerfall, the game is a two-to-four person arena fighter in which players try to destroy one another in adorable pixelated fashion. Characters double jump around the screen to deflect shots, get kills, and capture galaxies. Like Nidhogg, players must push themselves toward their opponent’s end of the screen. Doing so will bring them closer to capturing their galaxy. The combination of styles produces rather frantic gameplay. It’s fast and requires twitch-like reflexes, but it’s all a part of the fun. We can see it being really fun at parties.

Right now the game is waiting to be greenlit by Steam’s Greenlight program. Greenlight is a way for independent developers to get their games on Steam without a publisher. It requires users to go and vote to have the game be published, so it’s now up to the Steam user base to give the game the go ahead.