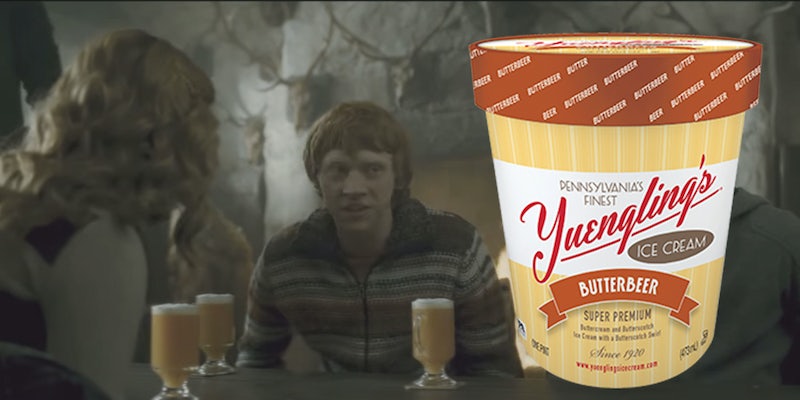 The sights and sounds of the Harry Potter universe are within reach at Universal’s Wizarding World of Harry Potter. But now one of the magical world’s most beloved tastes is coming soon to a spoon near you.

Yuengling’s Ice Cream makers have released a butterbeer flavor to select shelves at supermarkets in the northeast. (You can find out precisely where on the Yuengling site, if and when its servers recover from this recent onslaught of attention.) Each pint will be a blend of buttercream and butterscotch flavors, with a scrumptious swirl of butterscotch ribboned throughout.

It’s a favorite treat for visitors to the Three Broomsticks in Hogsmeade, and Yuengling is far from the first to try to capture the magic in the muggle world: There’s reportedly an off-menu Starbucks Frappuccino that pulls off something similar, as well as a butterscotch soda marketed by Reed’s. But this is the first ice cream purported to be a butterbeer knockoff.

According to the Huffington Post, it’s not just a limited release, either; the flavor will be a permanent part of the company’s 20-flavor rotation. And don’t worry that your kids won’t be able to enjoy the flavor: Just because the brand shares a founder with the popular Pennsylvania brewery by the same name, Yuengling’s butterbeer ice cream will be 100 percent booze-free.

Just so long as the world steers clear of Bertie Bott’s Every Flavor Beans for other flavor inspirations, we welcome new Harry Potter crossovers in the culinary world.