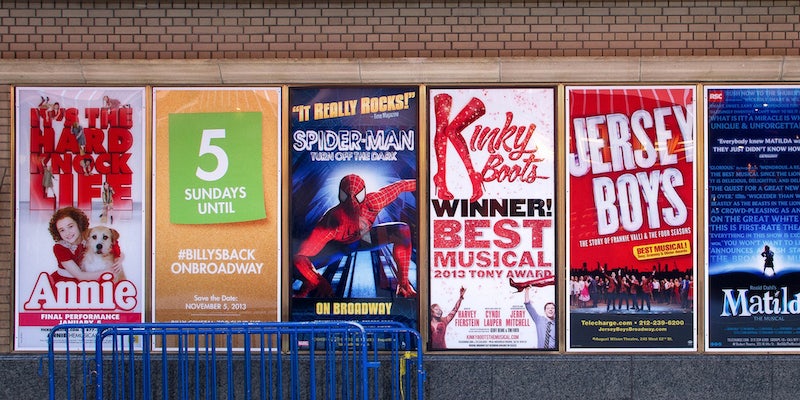 At a packed panel, a wide range of theater creatives discussed their struggles and triumphs.

“Vote with your dollars and your tweets and your Facebook posts and your ability to spread word of mouth,” was musical theater actor Telly Leung’s injunction to a packed audience at the New York Hilton Midtown on Friday. Leung was taking a rare break from the stage to discuss the state of Broadway’s diverse representation at this weekend’s Broadway Con, a fandom con in its very first year. But attendees clearly had more than celebration on their minds, and Friday’s panel highlighted the ways in which Broadway still has a long way to go to be truly inclusive—and the ways in which the Internet is helping make the issue more visible.

These days every con has its own version of the “Diversity Panel.” But at Broadway Con, the stakes may be even higher than usual. Despite a banner year of diversity on Broadway, notably headlined by the behemoth that is Hamilton, representation on the stage remains an uphill climb.

In 2012, the Asian-American Performers Action Coalition (AAPAC) found that over a six-year period, white actors gleaned 79 percent of all available parts on Broadway. And though 68 percent of all Broadway ticket-buyers are women, last season saw only two female producers and one female director at the helm of a Broadway show.

“This year is a banner year, unlike any we’ve ever had before, and I think that that has allowed this next year to become not so diverse,” said panelist Erin Quill, an actress known for Avenue Q who frequently uses her social media platforms to discuss issues of diversity and representation. Quill noted a number of diverse offerings on Broadway this season—Allegiance, Hamilton, The Color Purple, Spring Awakening, On Your Feet, and a revival of Fiddler on the Roof, among others—but added, “It’s really a broad season and I think the audience is responding, but coming up, not so much.”

Casting a shadow over the panel was the musical Allegiance. Starring George Takei, Lea Salonga, and Leung, Allegiance tells a uniquely Asian-American story of interned Japanese-Americans during World War II. Allegiance is notable for having a predominantly Asian creative team and cast—something not seen on Broadway since 2002. Allegiance is enough of a rarity that a lot was riding on its success or failure. But despite having critical acclaim and an enthusiastic following, the show recently announced it was closing just a few months after its November opening.

Conversations surrounding Allegiance highlight a worry many fans have voiced: That the success of Hamilton might ironically overshadow other important pieces of diverse and multi-cultural theater—and worse, make it harder for other projects to be produced to begin with. We might compare Hamilton‘s success with Twelve Years a Slave at the Oscars in 2014. Despite garnering universal critical acclaim, its Oscar wins have been followed for the last two years by an all-white field of nominees.

“Hopefully we won’t ever have a #TonysSoWhite,” panel mod Andrew Shade half-joked, referring to the #OscarsSoWhite hashtag that has proliferated the Internet in response.

Commercial success and awards representation aren’t the only ways to measure success in the theater business. Allegiance‘s failure to gain a commercial foothold among theater-going audiences this year shouldn’t overshadow what it has meant to many Asian-American theater creatives and audiences. Leung stated that an unprecedented 37 percent of the Allegiance audience had been Asian, which he claimed was far more than any production he’d ever been a part of. He emphasized that in the wake of Allegiance‘s decision to close, the creatives and production team had worked to expand its larger cultural impact, including subsidizing tickets for students to see the show.

Leung also stressed that owning ethnicity can be empowering for actors. But his insistence that actors can help themselves by bringing their best selves to every audition doesn’t hold water; after all, as he himself pointed out, the vast majority of theaters on Broadway are owned by just three companies. If the Shuberts and Nederlanders of the theater world won’t take a chance on new material from creatives of color and innovative casting, it’s hard to see what individuals without the same levels of power and privilege can do.

Playwright Roberta Pereira pointed this out when she spoke of growing frustrated with the limitations of Broadway. “I couldn’t tell the stories I wanted to tell on Broadway,” she stated. “It was really hard… Yes, it’s a very diverse season onstage, but then you start looking at who the designers and producers are, and you start asking, ‘What led to this story being told?’ ‘Who’s controlling that narrative?'” Similar frustrations recently led the actress Tanya Pinkins to leave an upcoming run of Mother Courage, citing discomfort with the “white gaze” of the production.

“Who loses, who thrives when white creatives tell black stories?” Pinkins asked—a headline that clearly echoes a crucial theme from Hamilton itself: “Who lives, who dies, who tells your story?”

Increasingly, the answer seems to be: “We do.” The social justice movement that has swept through other cultural corners is heading straight for Broadway. Initially, such movements got little traction—an attempt to boycott a revival of the ever-controversial Miss Saigon using the hashtag #missedsaigon got almost no traction in 2014; nearly two years later, however, the advent of a thriving Tumblr culture of critique and active Twitter hashtags calling for representation have raised awareness of the need to do more.

“We are the fans, we determine what we want to see,” Shade said. “Look around, this is who buys tickets… that’s the audience’s power.”

At the moment, the power movement has a long, slow upward trickle to reach Broadway’s mightiest movers and shakers; but as recent successes like Hamilton and NBC’s The Wiz prove, change is in the air.

“I have producers tell me, ‘Oh, we want to try ‘Hamilton casting’ for this show,'” Pereira said. “And I’m like, oh. I just call that ‘casting.'”

Photo via broadwaytour/Flickr (CC BY SA 2.0)