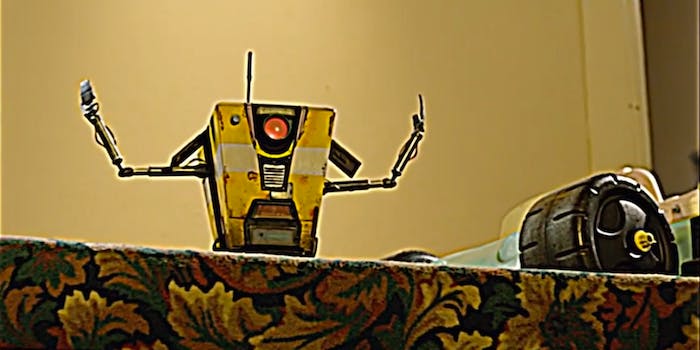 When it comes to the Super Bowl, the commercials are discussed as much as—and maybe even more than—the football game itself. In this year’s advertisements there was much to discuss, but frustratingly it turns out one of the most interesting ads just missed being aired during the game. Or so says Gearbox Software.

“All right, we admit it. We here at Hyperion blew it,” states the video’s description. “We missed the deadline for submitting our CL4P-TP ‘big game’ commercial, so we’re releasing it unfinished into the wild.”

The commercial is the perfect combination of funny and weird. It would have made an awesome addition to the Super Bowl commercial lineup.

Even though the commercial is fake in that it was never meant to actually air during the Super Bowl, the toy it features is very real. It’s sold with Borderlands: The Handsome Collection—Claptrap-in-a-Box Edition. Of course it might be hard to get your hands on one since the limited 5,000 copies have apparently sold out during preorders on Amazon, GameStop, and the 2K Store. The collection costs $399.99 and also includes exclusive lithographs, a collectible steel case, and the games Borderlands 2 and Borderlands: The Pre-Sequel.