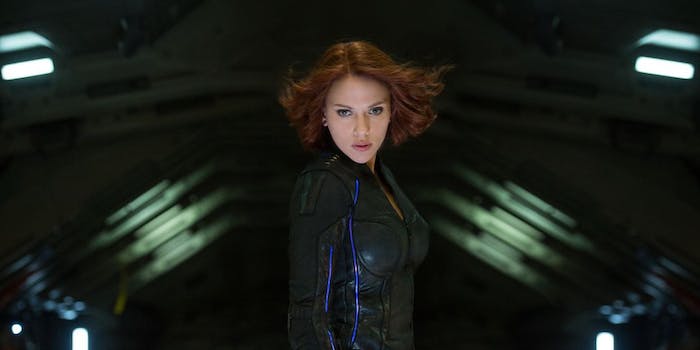 Scarlett Johansson hasn't ruled out a Black Widow movie, making these trailers all the more tantalizing.

“Of course we’ve had that conversation before,” she told Collider, “and I think Kevin would also like to see a standalone film.” Still, don’t hold your breath. Marvel has its movie schedule planned out until 2019, and we’ve been burned before. It’s entirely possible that we’ll never get to see a solo Black Widow movie, which makes these fanmade trailers all the more tantalizing.

Just in time for Avengers: Age of Ultron, two incredible new Black Widow fan trailers have popped up online. The first is by fanvidder Elinor X, who hints at Natasha Romanov’s backstory with a haunting Russian lullaby soundtrack. Can you believe we’re getting Ant-Man instead of this?

We especially enjoyed the credits at the end of that one, by the way. Read them carefully.

The second trailer is from Alex Luthor, creator of a whole host of blockbuster mashup trailers including DC vs Marvel. This one has a more action-heavy tone, drawing from Scarlett Johansson’s back catalog of Marvel movies.

If it’s any consolation, Joss Whedon says that Black Widow has “a huge part” to play in Avengers: Age of Ultron. Although that’s not the same thing as a solo movie.