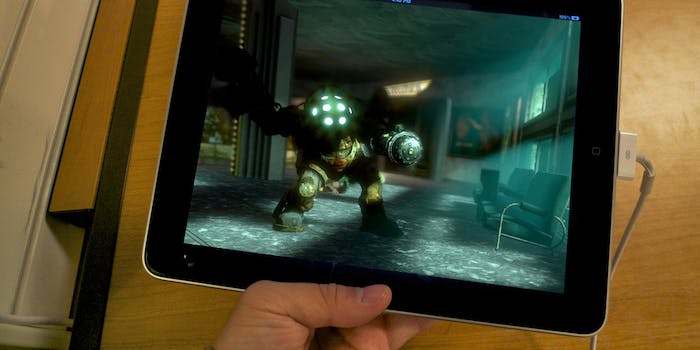 Soon you’ll be able to play ‘BioShock’ on your phone

Who says there aren't real games on mobile?

When Kim Kardashian Hollywood inevitably gets boring and you’re ready for a proper video game on your smartphone or tablet, the original BioShock is coming to iPad and iPhone devices.

BioShock on iPad and iPhone might also provide the definitive argument that first-person shooters—and many other kinds of core game experiences—are inappropriate for mobile devices without adding a Bluetooth-enabled control pad.

The argument that core games don’t belong on mobile devices is outdated. You can play Infinity Blade III or Republique on your mobile device and have an experience that stands up to games on Xbox or PlayStation platforms.

Those are games designed from the ground up to use touchscreens as a primary control input, though. BioShock was built for a control pad, or a mouse and keyboard. The “controls” page of the game manual for BioShock on the Xbox 360 lists 11 button inputs plus the two control sticks for movement.

We don’t know what the control scheme for BioShock on iPad and iPhone is going to look like, obviously. Virtual joysticks—putting your thumbs down on the touchscreen and moving them around as if your thumbs were atop control sticks—tend to be imprecise and unreliable.

And when we’re talking about FPS games specifically, precision can be everything, especially during a really tough fight. That’s why Bluetooth-enabled control pads for mobile devices have been on the market for a while, and why the NVIDIA Shield was created.

2K Games has announced that BioShock will be released on iPad and iPhone “soon.” No further details on availability have been released.