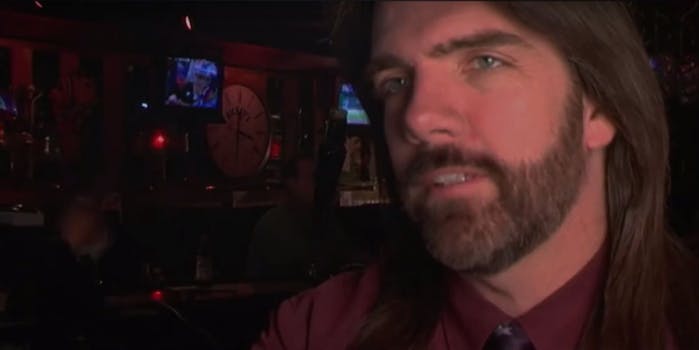 The King of Kong has been dethroned.

The jig is up for arcade game champ Billy Mitchell. The longtime controversial figure in the competitive arcade gaming community was stripped of his high scores and banned from competitive leaderboards on Thursday.

The move comes after months of scrutiny that forced Twin Galaxies, the governing body for arcade game scorekeeping, to reevaluate scores submitted by Mitchell. Twin Galaxies announced Thursday that its investigation revealed Mitchell used a software emulator instead of official Donkey Kong arcade hardware when achieving his record million-point score, making it invalid. Mitchell previously denied using a modified version of the game.

Twin Galaxies wrote in a statement:

Jeremy Young provided his dispute case evidence to the dispute thread for both public and Twin Galaxies scrutiny and review.

Twin Galaxies has meticulously tested and investigated the dispute case assertions as well as a number of relevant contingent factors, such as the veracity of the actual video performances that the dispute claim assertions rely upon.

In addition to Twin Galaxies’ own investigation into the dispute case assertions, at least two different 3rd parties conducted their own explorations and came to identical conclusions.

Most notable was the 3rd party (Carlos Pinerio) that Billy Mitchell engaged to help examine the dispute case claims on his behalf, utilizing whatever original equipment Billy could provide, whose final finding was consistent with Twin Galaxies investigation and others.

Additionally, during the evidence gathering period of this dispute, numerous experts, hobbyists, and casual observers participated and contributed to this investigation.

The news vindicates gaming community members who called into question Mitchell’s scores and Twin Galaxies’ credibility in continuing to back them. Mitchell was famously highlighted as something of a villain in the popular 2007 documentary The King of Kong, which followed underdog competitive gamer Steven Wiebe’s attempt to officially beat Mitchell’s high score on the original 1981 Donkey Kong game. The film actually played a role in Mitchell’s demise: A VHS tape of Mitchell’s record-breaking, million-point run shown in the documentary contained a transition screen not possible on an unmodified version of Donkey Kong.

The current Donkey Kong high-score holder is 31-year-old Robbie Lakeman, who scored 1,247,700 points in 2017. But that doesn’t mean Mitchell’s downfall isn’t significant. It will be especially sweet for The King of Kong fans that Wiebe will now be recognized as the first player to achieve a million-point score on Donkey Kong.

Twin Galaxies said it has notified Guinness World Records of its decision.