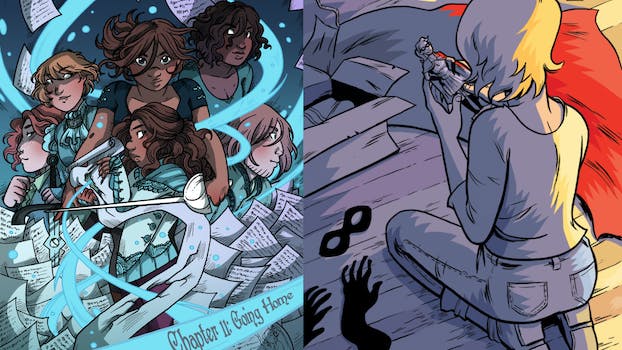 The best webcomics you should be reading

These are definitely worth checking out.

The rise of the internet delivers with it many entertainment options at the tips of our fingers.

Between social media, news sites and digital games, many of us spend hours every day staring at their phones. Next time you need a break from Candy Crush or the Wall Street Journal‘s latest breaking news, consider passing the time with a webcomic. Though many people have never delved into the world of these creative masterpieces, there are countless excellent digital comics published all over the web every day. Here is our list of the best webcomics the internet has to offer.

There are heaps of incredible webcomics being thought up at this very moment. The accessible medium is enticing to artists and aspiring authors, and so there is no lack of competition for this list. Since we don’t want you to fall in love with a brilliant comic clocking in at less than a few dozen pages, most of the webcomics on this list have a significant backlog of published content. You can enjoy our list of the best webcomics for months to come, thanks to the hard-working creators behind them.

A slice of life comic focused around real-world relationships and struggles, Questionable Content has been running for more than a decade. Author Jeph Jacques published his first strip back in 2003, and reached his 4,000th strip in May 2019. Even if you manage to catch up, there will be plenty of content to enjoy—Jacques posts new strips five days a week. Despite the name, there is actually less “questionable content” in this charming, down to earth webcomic than one might expect.

While Jacques doesn’t shy away from difficult topics like sex, anxiety, suicide, and loss, these are condiments on the hearty and rich world he has created. His protagonists—Marten Reed, Faye Whitaker, Dora Bianchi, and Hannalore Ellicott-Chatham—are complicated. No character that appears on his pages is not. Jacques understands that our complexities, our struggles, and heartbreaks are what make us who we are. He unashamedly shows life in an off-beat, funny way that manages to keep up with current trends, despite the comic’s age.

I won’t go into too much detail when it comes to Namesake, for fear of ruining the surprise. This wonderful, elegant comic injects fantasy into reality to create an engaging, enthralling mix of our world and the fantastical worlds we can reach only through the books we read. Written by Megan Lavey-Heaton and illustrated by Isabelle Melançon, Namesake manages to be nostalgic, current and even forward-thinking in its premise, storylines, and delivery.

Namesake takes place in a world very like our own. Apart, of course, from the presence of Namesakes—those who can enter and enact stories thought fictional to the rest of the world, and Writers—those who can create and change those stories, in turn affecting the Namesakes within. The story follows Namesake Emma Crewe and her sister Elaine, and gradually introduces a number of intriguing and memorable companions. A beautiful mix of nostalgia-laced fantasy and real, impacting stories, Namesake captures the fantasy some of us left behind with youth while still acknowledging the complexities of the world we live in. Add to this the wonderfully diverse cast of characters that Lavey-Heaton and Melançon created, and Namesake is well-deserving of its spot on this list.

It’s difficult to imagine a list of the best webcomics that doesn’t include Penny Arcade. This comic is almost too ubiquitous to require inclusion, but for the few people who may not have heard of it, let me change your world. Penny Arcade first ran back in 1998, back when writing a comic about video games was only kind of cool, instead of super, ultra, mainstream cool. Written by Jerry Holkins and illustrated by Mike Krahulik, Penny Arcade encompasses all things video game.

There is no recognizably linear storyline in Penny Arcade. While we get to know Holkins and Krahulik’s alter-egos Gabe and Tycho quite well, the comedy in this comic comes in short, quippy strips. There is little continuity, which makes this the perfect comic for someone looking for punchy jokes and occasionally cynical humor. Those readers searching for deep characters or complex storylines might want to further peruse this list, as this internet staple only rarely seizes on real-life moments in it’s thrice-weekly updated strips.

This fantasy webcomic veers much farther from the expectations of our world than the likes of Penny Arcade or even Namesake. Creator Ashley Cope has years worth of beautifully drawn comics in Unsounded‘s archives, with more than 14 chapters—most with upward of 70 pages—ready to enjoy.

The story centers around Sette Frummagem, daughter of the Lord of Thieves. This brash, loudmouthed youth is surprisingly cunning, and will—as the author puts it—”lie, cheat, and steal” to reach her goals. A multi-faceted tale that weaves in humor, suspense and no small amount of heart-wrenching moments, Unsounded is skillfully written and artistically stunning. To top it off, Cope takes particular advantage of the web medium through her use of animation during impactful scenes.

What begins as another slice-of-life tale following relatable characters takes a quick turn in Wilde Life. Created by Pascalle Lepas back in 2014, Wilde Life‘s archives house hundreds of pages of content. Lepas cut her teeth creating Zap!, a complete science fiction webcomic following the crew of the spaceship Excelsior. The years since Zap! was completed have only seen Lepas improve her art and storytelling abilities.

After journalist Oscar Wilde relocates to the uninspiring town of Podunk, Oklahoma, he finds his life significantly stranger. Witches, werewolves, and ghosts abound in the strange town, and Wilde finds himself caught up in their supernatural shenanigans. Humorous, engaging and carrying surprisingly down-to-earth tones, Wilde Life is the perfect hybrid of “normal” and everything but normal.

I love post-apocalyptic stories. I have wandered damn near every end-of-the-world, zombie-infested mutant-filled videogame ever released, and I soak up books and comics with the same passion. Stand Still Stay Silent delivers everything there is to love about the apocalypse while still finding a way to change the game. Created by Minna Sundberg, this masterpiece of a comic has a hefty archive to dig through.

Stand Still Stay Silent weaves Norse mythology into its beautifully crafted world. Set 90 years after the apocalypse, the story follows a crew, albeit a “poorly funded and terribly unqualified crew,” as they set out into the dangerous world. The unique watercolor style communicates even without words, and Sundberg’s ability to marry charming and funny banter with occasional deeply disturbing imagery sets this story apart. Sundberg’s passion for topography deserves special note, as readers of this comic have the unique privilege of deeply understanding the world she has created.

Created by Zack Morrison, this supernatural webcomic is currently on its sixth chapter. The perfect blend of reality and fantasy, Paranatural delivers goofy stories with deadpan humor and a fun, playful art style.

Paranatural follows a group of middle school students with superpowers as they investigate the supernatural occurrences cropping up in their hometown of Mayview. It might sound like Stranger Things in comic form, but this clever webcomic is in a league of its own. If you enjoy somewhat cynical, witty characters and action-packed storylines, definitely give Paranatural a try.

The story follows Alison Green, a 19-year-old retired superhero trying to distance herself from her superhero life. While this premise might sound like nothing new on its face, Ostertag and Mulligan’s comic brings far more to the table than a basic description might imply. Mystery, humor, and action all balance out in this clever story, which has received glowing reviews for its portrayal of the relationship between real life and superheroes. In 2019 America, which is quite thoroughly obsessed with all things superhero, Strong Female Protagonist adds something new to a well-worn premise.

This webcomic is the perfect antidote to our current political climate. Kelly Turnbull crafted the idea for a 2010 webcomic contest, and it became a creature all its own. While Turnbull doesn’t always have the time to update weekly, Manly Guys Doing Manly Things has hundreds of pages in its archive, so you won’t run out of new strips anytime soon.

Essentially a tongue-in-cheek criticism of the hyper-masculine character archetype, Manly Guys Doing Manly Things follows a number of different characters, often from existing media. The most frequent, Commander Badass, is an amalgamation of all the macho stereotypes Turnbull could think up. Honestly, I can’t do better than Turnbull’s own description of the comic. “It’s a comic about dudes who are too macho to function in society getting support from a chill supersoldier who just wants to work a desk job and raise his kids.”

In a world where the length of one’s hair denotes their magical ability, the long-haired—and therefore magically adept—Nyneve struggles with her place in society. An ethnically diverse cast communicates this culturally resounding story, which carries themes of marginalization and societal pressure. The world of Hyalin feels real when you see it through Ries’s gorgeous art, and her characters come to life both through her art and her skillful storytelling. For those without a strong Internet connection, there is even a hard copy of Nyneve’s adventures available to purchase online.

You know us at the Daily Dot—we love all things smutty, kinky and NSFW. In honor of that, I give you Oglaf, a sexually-explicit comic from Trudy Cooper and Doug Bayne. This absolute gem of a comic is aggressively NSFW, so the easily offended should stick to the other additions to this list. For those willing to delve into the kinky, hilarious minds of Cooper and Bayne, Oglaf is definitely worth checking out.