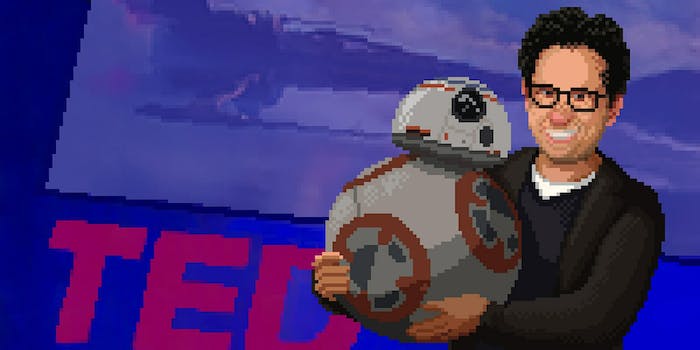 The 8 best TED talks for people who love geeky stuff

From J.J. Abrams to 'Ms. Marvel' co-creator Sana Amanat, these are some of the best geeky TED talks.

With more than 2,000 videos now posted on the TED website, it’s difficult to choose which talks to watch. And if you don’t have much patience for inspirational speaking, finding the right topic can seem downright impossible. Luckily, we’re here to narrow down your search.

1) Randall Munroe: Comics that ask “what if?”

If you’re a fan of the cult webcomic XKCD, you’ll love this talk from its author Randall Munroe. Before he took to writing full time he was a NASA roboticist, and like most scientists he is fueled by curiosity. His infectious enthusiasm for silly what-if scenarios (“What if you hit a baseball moving at the speed of light?”) adds humor and charm to some thorny scientific questions, which he explains in comic-strip format.

This talk is especially interesting because it was filmed in 2007, after J.J. Abrams found success with Lost but before he started work on Star Trek or Star Wars. He talks about his love of keeping the mystery in storytelling, as well as the best way to “rip off” (his words, not ours) classic movies like Jaws, E.T. and, yes, Star Wars. We also get some insight into how he manages to juggle so many projects at once: He talks very, very fast.

Vlogger and comedian Ze Frank has done several TED talks over the years, but this one is particularly interesting because it was filmed in 2004—before the advent of YouTube. It’s fascinating to see just how much his video and comedy style has influenced modern vloggers, even those who are too young to have watched his early material in the mid-2000s. Plus, his live recitation of a Nigerian prince scam email is hilarious.

Media critic Anita Sarkeesian is best known for her YouTube channel Feminist Frequency and the intense backlash that resulted when she began publicly analyzing sexism in video games. In this 2012 talk, she analyses the virulently hateful comments she received after becoming a public figure in the world of video games—a worrying sign of things to come once the Gamergate movement made headlines across the world in 2014.

Marvel editor Sana Amanat talks about her life and background as a comic book fan, and how her upbringing influenced the creation of Ms. Marvel‘s Kamala Khan, one of the most popular new superheroes in recent memory.

If you’re at all familiar with the work of novelist and YouTube star John Green, you’ll recognize the title of this video. Paper Towns is the name of one of his best-known novels. Green opens with an explanation of the term “paper towns” (which will likewise be familiar to fans of the book), but then moves on to discuss the impact YouTube has had on his life. As the co-founder of one of YouTube’s most vibrant communities—Nerdfighteria—he certainly knows what he’s talking about.

Virtual-reality tools like the Oculus Rift headset are undeniably awesome, opening up whole new worlds of art and entertainment. But as filmmaker Chris Milk explains in this talk, virtual reality also offers a unique opportunity to share the perspectives of people we will never meet in real life—and in doing so, foster bonds of empathy that could change people’s lives.

8) Thomas Hellum: The world’s most boring television… and why it’s hilariously addictive

TV fandom can be super intense; just ask anyone waiting for the next season of Sherlock. However, this talk from Norwegian TV producer Thomas Hellum proves that the even the dullest of TV programming can sometimes become ridiculously addictive.

Hellum is responsible for the introduction of “slow TV,” or live coverage of supposedly boring events like a seven-hour train journey or a lengthy fishing expedition. These events, which were broadcast without dramatization or narration, proved wildly popular in Norway, and Hellum’s TED-talk introduction to slow TV is both hilarious and fascinating.