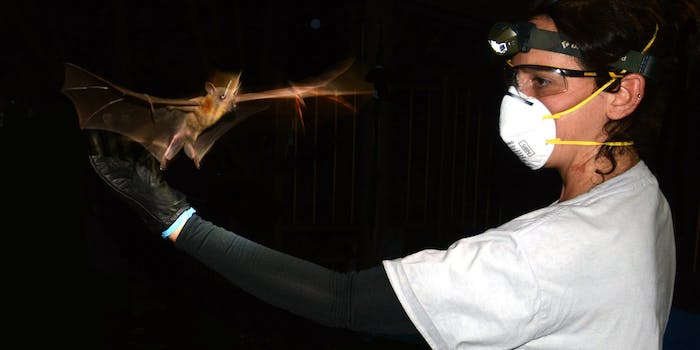 #BestFieldWorkPic combats the myth that science is boring.

Scientists took to Twitter on Monday to debunk the myth that science is boring by sharing the best photos of their field trips using the hashtag #BestFieldWorkPic. Here’s a photo of ecologist Michelle LaRue with some stowaway penguins:

Or how about this one with biologist Jeffrey Carrier wrangling a nine. foot. nurse shark.

#BestFieldWorkPic Hanging on for dear life with 9' nurse waiting for help to tag, draw blood, and attach CritterCam. pic.twitter.com/BzO8bLkfY8

It all got started when zoologist and blogger Michelle Jewell proposed the new hashtag.

Yes! Just got a hard drive full of old pics to work. I propose a new hashtag #BestFieldWorkPic

And it’s only blown up since then. Of course not every tweet shows the… glamor of wrangling sharks. Some tweets are about the dedication to the tireless pursuit of knowledge. Here’s an exhausted ichthyologist Prosanta Chakrabarty getting ready to do some cave fishing.

Of course you probably won’t be seeing a follow-up hashtag for this one. After the fun field day comes the hours upon hours of mundane data crunching, grant writing and the horrendous rigamarole of publication.

But it’s obviously worth it if getting to goof around in the mud is part of your job description.