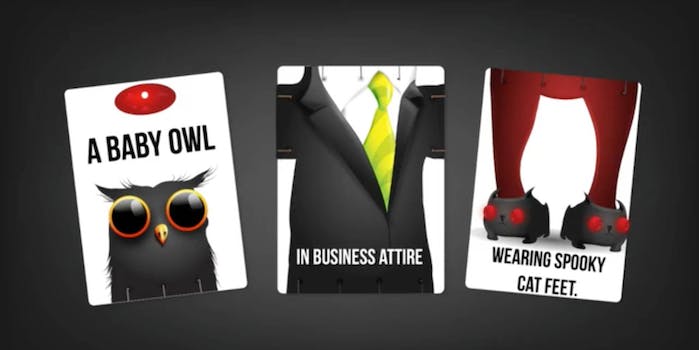 Here’s your chance to get the Oatmeal’s newest card game, Bears vs. Babies

Scary babies are on the attack—and only hilarious creatures can stop them.

A year after the Exploding Kittens card game broke Kickstarter records, the Oatmeal‘s Matthew Inman and game maker Elan Lee are back with a brand new enterprise.

The pair launched a Kickstarter campaign Tuesday for their new Bears vs. Babies game, and it’s already off to an incredible start. As of publication time, they’ve already raised more than $880,000 from more than 23,000 backers, blasting their laughably tiny $10,000 funding goal into orbit.

Like Exploding Kittens, the Bears vs. Babies game cards are all illustrated by Inman. The base deck is quirky but family-friendly, and there’s a NSFW booster deck available to Kickstarter backers who fund the campaign at the $35 level. The base deck—the only other funding option—is $25.

A quick video and step-by-step breakdown on the Kickstarter page explains the game, but basically you draw cards to build creatures (think “a shark in business attire who sucks at dancing”) that you then used to battle scary-looking babies when your opponents provoke them. Bears vs. Babies moves pretty fast, taking just 20 minutes per game.

The Kickstarter campaign still has 29 days left, so you have plenty of time to get in on the action. While Exploding Kittens eventually made its way to Amazon, as well as some game stores and comic shops, backing the Kickstarter was the easiest way for fans to grab their own decks. If you want Bears vs. Babies in your hands as fast as possible, we suggest backing the campaign.