Gameplay shines in Bayonetta 2, but the game’s heroine falls flat

Platinum Games gets so much right with Bayonetta 2 it's disappointing to see what the studio got wrong.

Perhaps the most remarkable thing about Bayonetta 2 is that it almost didn’t get made. After Sega passed on publishing the sequel, Platinum Games nearly had to scrap the whole thing until Nintendo stepped up to foot the bill and take over publishing duties.

While some might say the remarkable part is that family-friendly Nintendo would even want to publish a game as overtly sexual as Bayonetta 2, perhaps even more surprising just how good the game turned out.

For a game that nearly didn’t exist, Bayonetta 2 is one of the most finely crafted and satisfying action games to come around since, well, the first Bayonetta in 2010 (which is included in the retail version of Bayoneta 2, or downloadable from theWii U eShop).

Now, before getting to what makes it so good, you can’t talk about Bayonetta 2 without addressing Bayonetta the character. The first game straddled the line between portraying its lead heroine as an empowered sex-positive woman and an outright sex object. Gratuitous camera shots lingering too long on her ass, crotch, and breasts were somewhat offset by a defiant attitude where she refused to be defined by the men around her and a pseudo mother-daughter plot that helped to flesh out Bayonetta as a character without compromising her sex-positive demeanor. 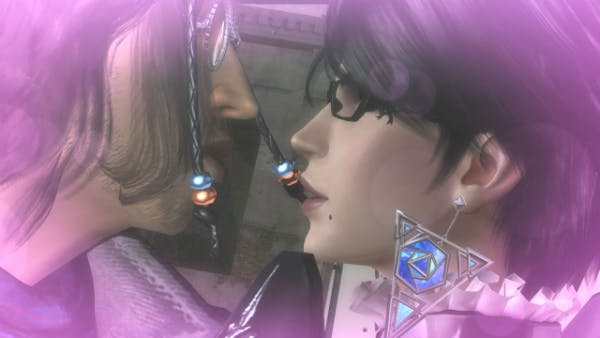 Bayonetta 2, instead of building on the first game’s character depth, infantilizes its heroine. Yes, the shorter haircut and rounder face give Bayonetta a younger appearance in Bayonetta 2, but that isn’t the real trouble. Bayonetta may be the center of the game’s story, but only because events happen around her, rather than to her or because of her.

Right from the outset, a mysterious young boy wielding a deck of tarot cards is established as the story’s center, and Bayonetta spends much of the game following him around. She tries to jump in and rescue him, but inevitably she is the one getting rescued at the last minute. This boy also chides Bayonetta throughout the game, with only the briefest of a cursory rebuke from her at their first meeting.

Bayonetta 2‘s character regression culminates in a scene toward the end where a man commands Bayonetta to call him “daddy,” and she does so without hesitation. Twice. If the first Bayonetta characterized its heroine as Beyonce belting out a ballad to all her single ladies, Bayonetta 2 settles for Miley Cyrus grinding against Robin Thicke while singing along to his song.

Bayonetta 2‘s story, sexist and nonsensical as it is, will take players to gorgeously diverse locales, from New York City to the vaguely Venice-like city of Noatun, underwater ruins, and the depths of Hell in the insect-inspired Inferno. And with each new region comes new legions of angels and demons trying to stand in Bayonetta’s way.

The combat will feel immediately familiar to those who played the first Bayonetta. Punches and kicks string together for a dizzying array of combo attacks. The rhythm of your attacks can change the combo just as much as which button you press, all while you’re dodging enemy attacks and triggering the coveted witch time, a temporary slow motion where you can deal massive damage if you time your dodges just right.

The weapons are the real stars of the show, encouraging you to experiment to find the ideal weapon combinations for the enemies at hand and your preferred approach to dealing with them. Some weapons, like a giant hammer and an undulating scythe, can only be held in Bayonetta’s hands, while others, like dual swords, a flamethrower, a whip, and Bayonetta’s signature revolvers, can work just as well in her hands as strapped to her high-heels.

Different combinations of weapons will play off of each other in unique ways, and your arsenal is expanded by the ability to swap to an alternate weapon loadout at any time with the press of a button. The combinations aren’t exactly endless, but they are vast and allow for tremendous depth in how you approach each fight. 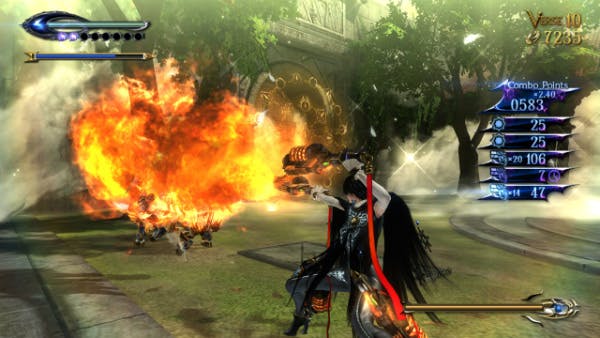 But while the core combat feels much the same, the pace has been ratcheted up considerably. Platinum Games knows its way around the Wii U hardware, pushing for faster fights in exquisitely detailed settings at a silky smooth frame rate.

Newly added to the combat system is also something called the umbran climax, a mode you can trigger when your magic replenishes that pumps up the range and damage of Bayonetta’s attacks with appropriately cool visual spectacle. Bayonetta 2 isn’t a case of style over substance, the style is inextricably blended with the substance of its combat in perfect harmony.

There have also been smaller, but no less powerful, improvements to the combat. For example, if you pick up an enemy’s weapon it is now set to its own button. It makes the use of enemy weapons more of a tactical choice, so if you wanted to hold onto a powerful item through several encounters until it is actually needed, you now have that option.

Bayonetta 2 also has an alternate control option using the Wii U GamePad’s touchscreen. And while the touch controls don’t allow for quite the same combo control as button input, it can still be remarkably effective. Hardcore players may shun the touch option, but its inclusion opens up the game to new players who struggle with the dexterity. It’s great to see such an intense action game accommodate players like this, and Platinum Games should be applauded for the option. 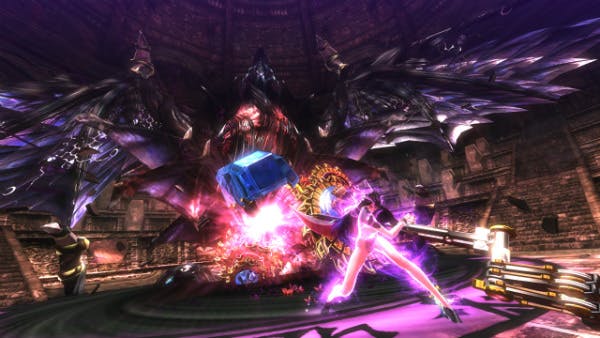 Levels are fairly linear, but also offer enough open space and side paths to reward players who want to explore each setting and find all of the game’s secrets. Gates to an alternate dimension called Muspelheim offer challenging combat trials with constraints like defeating all enemies in a single combo or only dealing damage in witch time. Broken record LPs provide new weapons for Bayonetta’s arsenal when all of the pieces are assembled. And even what appears to be a dead end can lead to a thrilling optional fight that boosts your score at the end of the chapter.

As you make your way through the story you will also unlock verse cards, which feed into Bayonetta 2‘s new online multiplayer Tag Climax mode. There are 52 verse cards in all, and each one acts as a challenge mission that can be tackled by two players connected online or by a solo player with a CPU companion. Tag Climax mode is an interesting mix of cooperative and competitive play, where both players work together to clear out enemies while independently trying to edge out with the higher score. To make things more interesting players wager halos, Bayonetta 2‘s currency, on each round and only get a payout if they win. But at the same time, the more halos you wager the harder the enemies will be, so there is considerable risk in trying to force a huge payday.

Tag Climax certainly isn’t the main draw for Bayonetta 2, but it is a nice diversion with some challenging fights and a great excuse to test out new weapons, characters, and costumes. And a special note on those costumes, Bayonetta can dress up as some Nintendo classics like Samus, Link, and Peach, each with special abilities and sound effects inspired by their respective characters. Rolling up into Samus’ morph ball or deflecting attacks with Link’s shield is pretty great, but nothing is quite so satisfying as dressing up as Peach or Daisy and summoning Bowser’s fists to pummel your enemies.

If I were a betting man, I’d wager that Nintendo wanted to tone down Bayonetta’s overt sexuality, so her dialog and attitude were stripped down for less innuendo. The irony is that if she had been given a more overtly sexual characterization in Bayonetta 2 then there would have been more opportunities for her to have agency over her sexuality.

But without that empowered, independent characterization from the first game, all of the sequel’s lingering camera angles and convenient crotch shots come across as more creepy than playful.

That’s a shame, because the combat in Bayonetta 2 is the epitome of playful. The weapon variety makes experimenting with new combos a joy, and well-balanced encounters with creative enemy variety ensures that you will need to experiment with every tool at your disposal to survive. In terms of polish, variety, and just pure fun, there is a very strong case to be made for Bayonetta 2 as Platinum Games’ best action game yet.

Disclosure: Our review copy of Bayonetta 2 was provided by Nintendo.

All images courtesy of Nintendo.