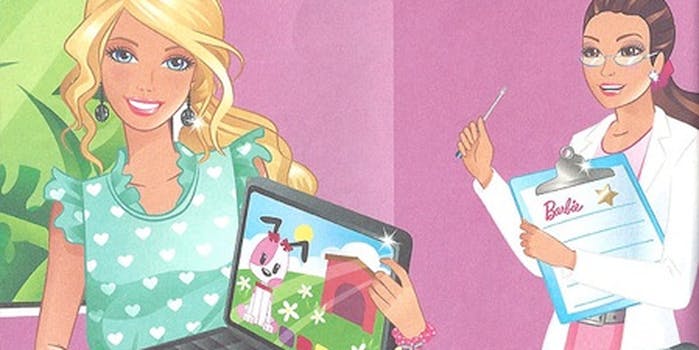 Barbie wants to be a computer engineer, but she can only design games—boys have to develop them.

She’s been a swimsuit cover model and a human trafficking victim, but Barbie has never really been touted as a working professional. The latest affront to basic decency in gendered toy marketing comes from a Barbie book that tells girls they can’t be game developers or programmers.

The book is bafflingly called Barbie: I Can Be a Computer Engineer. It was written by Susan Marenco and published by Random House. Despite its encouraging title, Marenco’s book actually tells preteen girls that Barbie can only contribute to the design of the game she’s building.


This book, released last June, was paired with another career-minded book called Barbie: I Can Be an Actress. All five reviews for the two-book set on Amazon are from baffled parents wondering why a story called I Can Be a Computer Engineer is sending the opposite message. In fact, according to the site’s only three-star review (the others each give one star), it might more accurately be called “I Can Manipulate Boys Into Programming While I Sit Back and Take Credit.” Here’s how the three-star reviewer, Roxanne M, describes it:

Basically what happens is she designs a game (but can’t code it without her guy friends’ help), infects her own and her sister’s computers with a virus by accident (lolol), has her guy friends help her fix both of them, and then takes all the credit for the game and fixed computers in the end.

Oy. You’d think that, with a plot that hackneyed, Barbie would at least get a better title. After all, “I Can Be a Game Designer” is still a pretty cool title! But alas, as blogger and comedy writer Pamela Ribon quickly discovered when she picked up the book for the first time yesterday, it isn’t intended to give girls even that much empowerment.

As Ribon describes in an increasingly cringe-inducing writeup about the book, Barbie is introduced as the designer of stereotypically “girly” games featuring cute little animals. Barbie’s work resembles Pet Rescue or similar mobile games—you know, not the ones “real gamers” make. 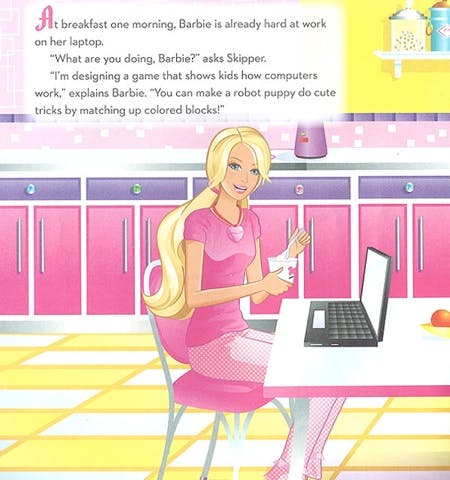 That’s OK, though, because Barbie is apparently perfectly happy with her second-class status. “I’m only creating the design ideas,” Barbie tells Skipper. “I’ll need Steven and Brian’s help to turn it into a real game!” She’s laughing when she says it, though, so we’re assured that she’s totally OK with her fate. Barbie appears to embrace her life as a pink-clad artist who gets waylaid by cute robot puppies and never makes a dent in the tech culture gender gap. 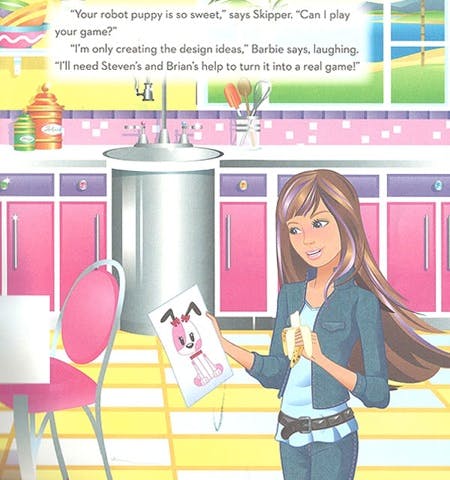 From there, the book unleashes a litany of sexist stereotypes, already all too familiar in the world of preteen girl marketing. Barbie signals her geek cred by wearing her flash drive in a giant pink heart-shaped necklace. Too bad that flash drive has a virus. 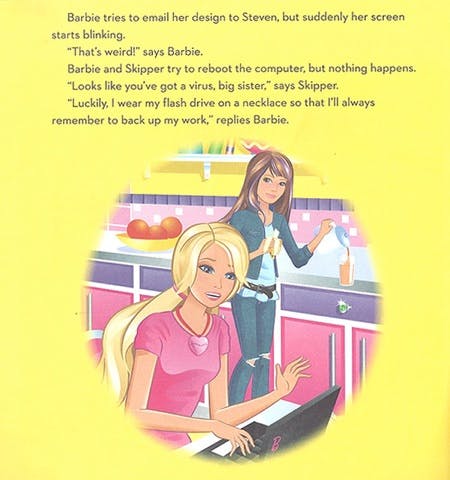 Barbie is also too dumb to notice that the virus exists before it crashes her computer. Maybe she doesn’t have malware protection? She also can’t restart her computer without her sister’s help.

It just gets better (worse) from there: Barbie does indeed accidentally give Skipper a virus, and Skipper’s reaction, as described by Ribon, makes her sound like an alien with no investment in her schoolwork or emotional attachment to her music collection:

“I forgot to back up my homework assignment!” cries Skipper. “And all my music files are lost, too!”

“I’m so sorry, Skipper,” says Barbie. “I have to run off to school now. But I promise to find a way to fix your laptop.”

“You better!” Skipper replies as she playfully hits Barbie with a pillow.

To recap the sophisticated narrative: Skipper has just lost her homework, all her music files, and her laptop, but the only thing she can think about now is a pillow fight. 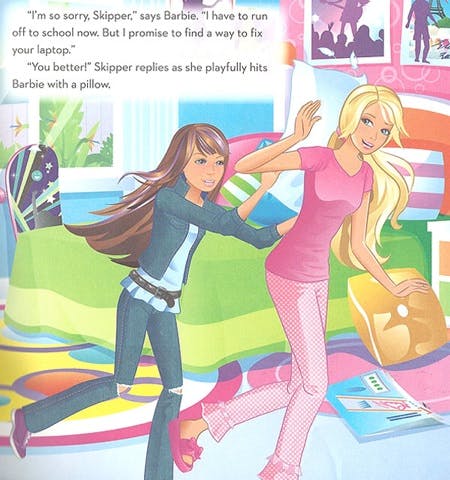 Later, after receiving instructions from her female computer-science teacher, Barbie tries fixing her computer alone. That’s when the aforementioned Steven and Brian arrive and tell her that things will “go faster” if she lets them help. Ribon points out that while the book portrays them as perfectly nice dudes, they represent the actual systemic marginalization that she and countless other women have experienced in the tech industry:

As if all that weren’t enough, at the end of the book Barbie really does take all credit for the work that Steven and Brian do. She decides, without any actual coding experience, that “I guess I can be an engineer!”

Ribon notes that since the other story is juxtaposed and inverted against the engineering story, the book actually has one last passive-aggressive insult for girls reading it: “When you read Barbie: I Can Be a Computer Engineer, it appears that you are so fucking dumb, you’re reading Barbie: I Can Be an Actress upside down.”

Sadly, toys for girls are often blatantly offensive in their use of gendered stereotypes, if they aren’t ignored altogether in the rush to produce action figures for boys. In that context, this kind of stereotyping is to be expected from a no-name toy product. But Barbie has been running its “I can be…” campaign for several years, explicitly to help empower girls by telling them they can be everything from professional surfers to the President. Sure, it’s just class president, but we’ll cut her some slack—assuming she didn’t bribe boys to vote for her by offering to let them undo her perky pink hair bow.

At some point, maybe Mattel should just quit fronting and abandon the pretense that Barbie—whose body proportions are so unrealistic that a woman reportedly removed two of her ribs just to try to match them—has anything empowering to offer young girls. Mattel has already featured Barbie on a Sports Illustrated cover. After that, no amount of career ambition can mask where her true cultural value lies. Sadly, it’s not in her programming skills.