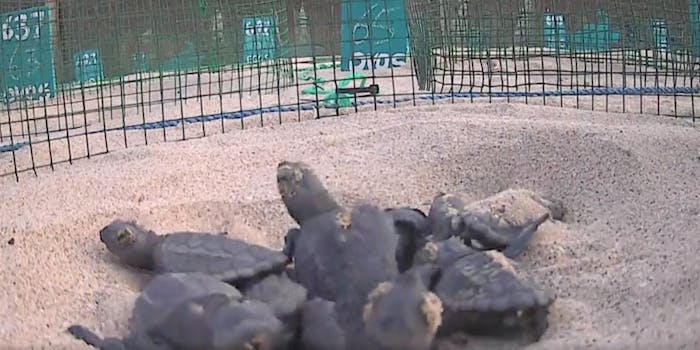 Need a quick distraction from the firehose of crap on the internet? Behold the miracle of marine life.

BBC Earth on Thursday livestreamed a clutch of loggerhead turtles hatching from a protected nest on a Cape Verde island off the coast of West Africa. If you’re a fan of BBC Earth’s nature documentaries, you’ve probably seen this phenomenon before—but this time it’s happening in real time.

Unfortunately real time is real slooow. So if you want to skip to the good part, fast-forward the video above to the 57-minute mark to catch the action. All those tiny turtles burst through the sandy surface before being scooped up by workers with Project Biodiversity, the Cape Verde non-profit attempting to help their species.

According to a note posted with the video: “These eggs were rescued from the beaches where they were laid and moved to a hatchery protected from poachers, stray dogs, and litter. After two months incubating under the sand, they’re now ready to hatch.”

Loggerhead turtles are listed as endangered by the World Conservation Union. If you stick around (or jump ahead) to the end of the video, you can watch the workers carry the babies down the beach to give them the safest passage possible into the wide world of the Atlantic Ocean. The turtles are on their own after that—and hopefully some of them will survive to adulthood.

The babies seem to be hatching in waves, with some emerging last night and more arriving today. If you enjoyed seeing this round, keep an eye on the BBC Earth and Project Biodiversity Facebook pages for more.