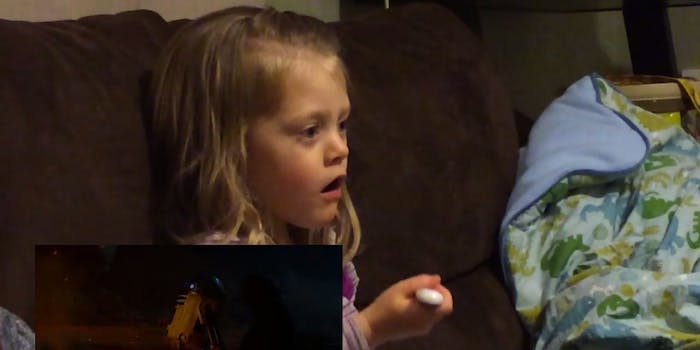 Babies have the best reactions to the new ‘Star Wars’ trailer

The fandom is strong in these young ones.

Everyone on the Internet—longtime fans, casual viewers, and even Superman—lost their minds when the newest trailer for Star Wars: The Force Awakens was released last week at Star Wars Celebration. But our reactions probably pale in comparison to how babies are taking it.

No matter how much faith you have in J.J. Abrams and company, there’s always the creeping fear of What if it’s terrible? A terrible Star Wars movie might still be better than a “good” Transformers film, but it could be enough to taint that child-like excitement.

Babies don’t have this anxiety. They’re still immune from cinematic disappointment, and they carry none of the cynicism that plagues us older people. If they’ve seen Star Wars, they’re flipping excited about getting another movie in a beloved series that they thought was done. If they haven’t, the trailer still looks incredible. It’s got flashes, lightsabers, old faces and new, and a killer score.

To these babies, it’s pure, unadulterated joy—and we are all envious.