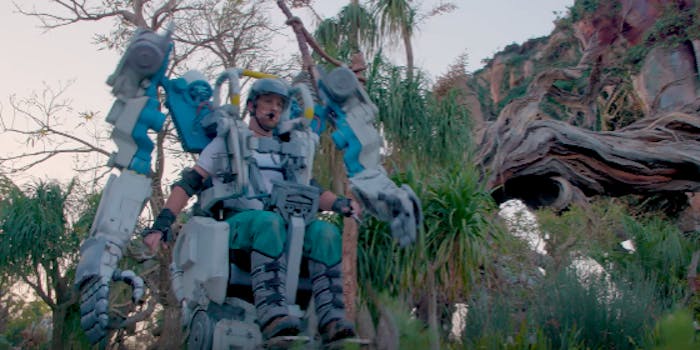 After all, who doesn't love bipedal mechs?

Fans of the megahit 2009 film Avatar are in for a real treat the next time they pay a visit to Animal Kingdom at Walt Disney World. There’s already the Avatar-themed area of the park, named after the film’s setting, the lush and fantastical world of Pandora. But now, Disney is teasing an upcoming addition to the Avatar section of the theme park: the Pandora Utility Suit, a type of physical mech suit that the park’s performers will get to ride around in.

The conceit is that it’s the Pandora Utility Suit, a device featured in the film. In that case, it was created through the use of computer graphics. In this case, it’s a real, physical, enormous suit that performers at Pandora: The World Of Avatar will be able to delight and entertain fans in, portraying themselves as conservationist explorers and researchers on the fictional planet.

Disney released footage of the new utility suits in action to YouTube this week, and they look about as cool, impressive, and improbable as anyone could hope for. Disney uploaded a teaser trailer for the suits this week and also released a behind-the-scenes glimpse into how they were made.

The suits, as displayed in the video, were a creative collaboration between Disney, Michael Curry Design, and Lightstorm Entertainment, the production company founded in 1990 by Avatar director James Cameron. The suits, according to the video, are not identical to the Amplified Mobility Platform suits presented in the film but are rather a brand new creation for the theme park. Conveniently, the suits―which stand nearly ten feet in height―don’t require the performers to be standing, allowing them instead to sit harnessed inside.

It may seem hard to believe, but it’s been nine years since Avatar was released in theaters, although production has already begun on its long-awaited sequels. It’s expected that Avatar 2 will be released in 2020, with Avatar 3 following in 2021. It remains to be seen how many films will ultimately be released in the series―Cameron himself has acknowledged that whether he produces a fourth or fifth Avatar installment will depend on how well the movies do at the box office.