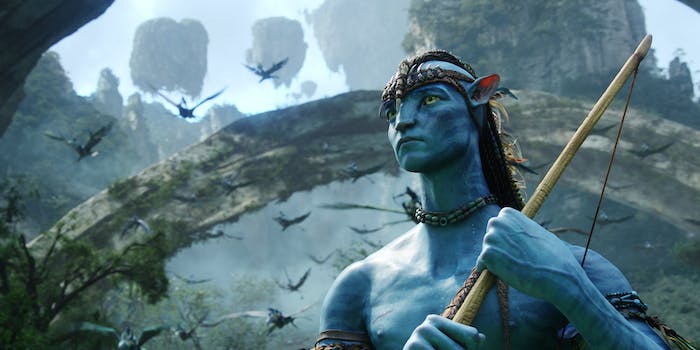 James Cameron reveals the new cast of the ‘Avatar’ sequels

These kids will play Sully and Neytiri's children in 'Avatar 2.'

Sam Worthington and Zoe Saldana will be joined by a troupe of young actors, revealed in Entertainment Weekly. Some of the kids play Sully and Neytiri’s children, while others hail from another Na’vi tribe, the ocean reef-dwelling Metkayina. By the way, the fact that Sully and Neytiri have children? That means the human scientists built Sully’s synthetic Na’vi body to be fully fertile. What an extremely normal thing to do on an alien research expedition.

Most of the children in EW‘s cast photo will be near-unrecognizable beneath their Na’vi CGI bodies—with one exception. Javier “Spider” Socorro (Jack Champion, seated on the center-left) will play a human teen who was born in the military base from the first movie.

As producer Jon Landau told EW, the young cast suggests a new direction for the franchise. “We never had this youthful element before,” he said. “That brings a different kind of energy to the film.” The first movie was already a family-friendly blockbuster, but it’s interesting to see Cameron skew so young for the sequels. Avatar 2 is due out in Dec. 2020, so its younger viewers will not actually remember the original’s release in 2009. He’s banking on Avatar having the same staying-power as Star Wars and Terminator.

After eight years of rewrites and pre-production, Cameron plans to film Avatar 2, 3, 4, and 5 in one long stretch, with the fifth film due out in 2025. This makes it one of the most ambitious franchises in Hollywood—and the weirdest. While Avatar had a massive impact in 2009, it basically vanished in the intervening time. People just don’t care about Avatar in the same way they care about Marvel movies, and sequel news is routinely met with derision and disbelief.

20th Century Fox seems confident in Cameron’s ability to deliver on Avatar‘s success, however. The upcoming sequels will cost more than $1 billion to make.