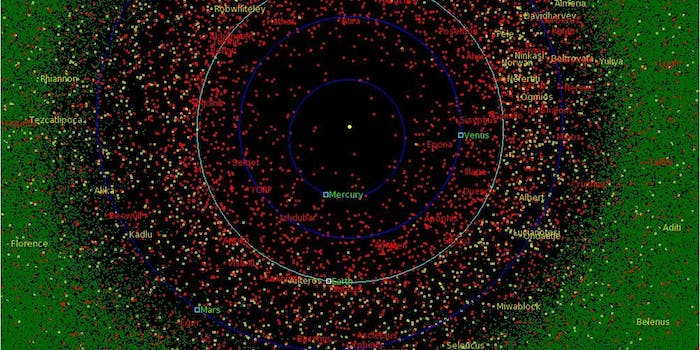 But don’t panic—we’ve got a plan if any come too close.

Our little corner of space is full of asteroids whizzing by us. And a new video created by a computer programmer with a PhD in astronomy slams home just how crowded our solar system really is. The animation (below) shows the more than 580,000 near-Earth asteroids discovered from 1980 to 2012. Prepare to be amazed.

It starts a little slow, but by the time we hit the mid-1990s, the rate of asteroid discovery picks up. Scott Manley is the charmingly accented narrator and brain behind the video. He explains that you’re looking at a top-down view of the inner solar system, where Mercury, Venus, Earth and Mars orbit. Jupiter dances around the edge of the simulation.

Green dots represent asteroids that stay in the belt between Mars and Jupiter. Yellow ones are asteroids that cross the orbit of Mars. Red ones are Earth orbit crossers—the ones we want to keep a close eye on in case they get too close for comfort.

Another cool feature of Manley’s asteroid video is that the asteroids flash white as they are discovered. If you pay attention to those flashes, some interesting patterns emerge. When asteroid watchers switched from photographic plates to electronic ones, new discoveries happen faster. This happens in the mid-1990s. In the late 1990s several automated asteroid discovery programs come online.

The flashes of white pulse about twice a second, and Manley explains that those pulses correspond to the lunar cycle. When the moon is full, it’s too bright for us to see asteroids from Earth, and discoveries have to wait until it wanes again. Right before the three-minute mark in the video, the white flashes fan out into two wings. This represents incoming discoveries from a new satellite called the Wide-field Infrared Survey Explorer (WISE).

In case you’re wondering, asteroids are rocks hurtling through space. Comets hang out in space but also contain ice. Meteorites are rocks or comet chunks that fall to Earth. And meteoroids are meteorites before they hit the Earth’s surface. Meteors are the fireballs that streak across the sky. Go ahead and impress your friends with your precision of space rock language.

If all of this talk about space rocks orbiting near Earth is making you uncomfortable, don’t panic. NASA and other programs around the world are tracking these asteroids. You can keep updated with NASA’s asteroid watch.

Yes, an impact probably wiped out the dinosaurs. But as this excellent TEDx talk by Phil Plait explains, the chances of that happening to us are very low. If an asteroid or comet heads our way, we can either knock or gently tug it into a safer, less Earth-smashing trajectory. So rest easy, and make a wish on any meteor you see.