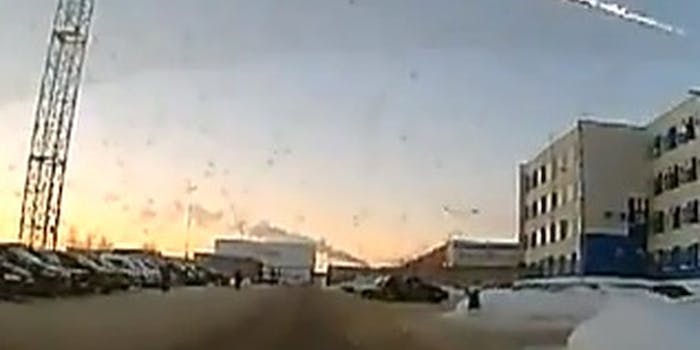 Early estimates indicate that 950 may have been injured.

If you’ve been living under a rock (or don’t pay too much attention to space news), you may not be aware that an asteroid is rolling on by Earth today.

We’re not in any real danger, so you don’t need to frantically search for Bruce Willis to save the day. However, a smaller meteor did crash into Earth in the wee hours of Friday morning, lighting up the skies in Russia and setting the Web on fire.

Early estimates suggest that the crash injured 950 people, with the Russian Interior Ministry estimating the size of the meteorite, which apparently landed in a lake landed in the Urals region, at 10 tons.

The tags #RussianMeteor and #метеорит (you don’t need to be fluent in Russian to figure that one out) were trending worldwide on Twitter at around 9am ET, though many in the Chelyabinsk region captured footage of the crash and shared it to YouTube.

Thanks to the prevalence of dash cams in Russian cars and people quick to pick up their cameras, we’re able to get a first-person look at the stunning phenomena.

The impact of the meteor shattered windows and caught many offguard.

Correction: A previous version of this article incorrectly described the object passing by Earth as a meteorite. Technically, it was an asteroid while still in space, a meteor once it entered our atmosphere, and a meteorite once it actually touched down on the planet.