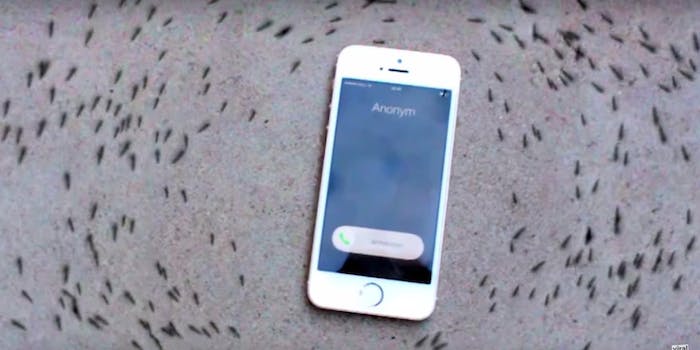 You may have seen this video of ants appearing to circle an iPhone at the provocation of the phone’s ringtone.

It looks pretty unbelievable and mesmerizing—the perfect recipe for viral success—but if you’ve been sharing the video with everyone you know, the people who study ants professionally have some bad news for you.

The "Ants Circling the Phone" video is fake.

The Daily Dot spoke to Terry McGlynn, an ant entomologist at California State University–Dominguez Hills, to get his perspective. He told us that the ants in the video probably aren’t real at all, but are rather digitally animated.

It’s unusual for ants to walk on top of one another as they do in the video,  McGlynn said. He was also suspicious of the video’s low resolution, which seemed to be intended to prevent anyone from identifying the exact species of ant.

“Sometimes it looks like they wrote a computer program so they follow complex interaction rules,” he said. “I’m 90 to 95 percent confident that those are not real ants.”

And if they are? Well it’s definitely not the phone causing the behavior. The post accompanying the video claimed that “the electromagnetic radiation affects the ants causing them to circle [the] phone.” Brian Fisher, an ant entomologist at the California Academy of Sciences, told the Daily Dot, “I assure you there is no electromagnetic pulse that is causing this behavior.”

Fisher said in an email that, assuming the ants are real in the first place, the videographers are probably using a chemical trick to create this effect.

Some species of ants secrete chemical signals called pheromones to lead other ants to food sites. In his lab, Fisher has been able to use the pheromone to get ants to walk in circles similar to what’s shown in the video. He thinks the creators of the video probably did the same thing. If you watch carefully, you can see the ants starting to form the circle just before the phone rings.

But whatever the real reason, scientists have weighed in and said that the phone definitely has nothing to do with the ants walking in a circle.