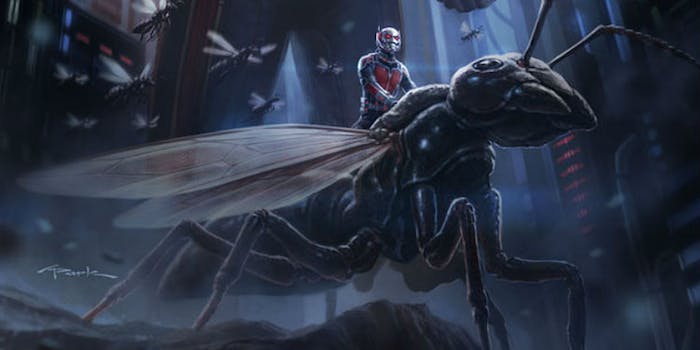 At San Diego Comic-Con, Marvel Studios is keen to get things back on track and make sure fans are excited for the Ant-Man movie. But elsewhere, it doesn’t look so great.

According to Deadline, three Ant-Man actors have just dropped out of the movie. Matt Gerald and Patrick Wilson’s characters were apparently written out of the new version of the screenplay, while Kevin Weisman left due to scheduling conflicts, potentially thanks to delays in Ant-Man’s filming schedule.

Following the unexpected departure of director Edgar Wright, fans have been speculating furiously about just what is going on behind the scenes of Ant-Man. Marvel finally found a new director, but only after several key crew members had quit, and new writers had been hired to rework Wright’s screenplay. Ant-Man is currently the point of concern on Marvel’s otherwise excellent record of successful superhero movies, with many fans concerned that the loss of Edgar Wright marked the downfall of an interesting adaptation of such an odd character.

Someone take that guy with the sign out for a beer on my behalf. I’m worried about him in the heat.

The film’s first concept art poster was revealed at the beginning of Comic-Con, with fans hoping to hear some more solid information at the big Marvel panel on Saturday night. With the film’s official release date less than 11 months away, the pressure is on for the Marvel panel to reassure its audience that things over at Ant-Man HQ are nowhere near as chaotic as they sound.

Stop by the #Marvel Booth (2329) to pick up this epic concept poster art for Marvel’s #AntMan by Andy Park! pic.twitter.com/twpgcdkLCf