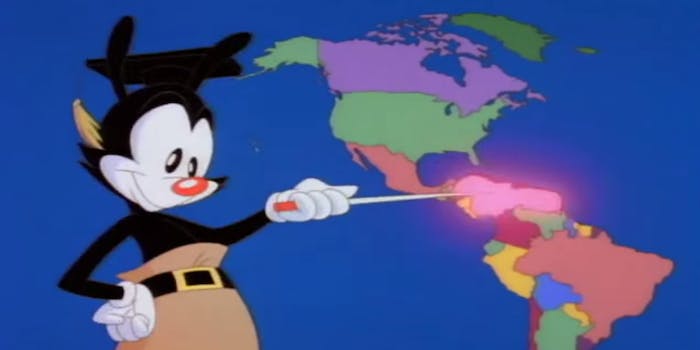 This song STILL gets stuck in your head.

Fans of 1990s cartoon classic Animaniacs probably remember the show’s many musical numbers, the jam-packed “Yakko’s World” in particular. Listing off the names of (not quite) every country on Earth, the simple tune was top-notch earworm material, as educational as it was entertaining. And as YouTube creator The Usual Suspects demonstrated in a recent upload, it’s even more fun when cobbled together from movie clips.

The amount of work that must’ve gone into the video is considerable, given not just the effort of cutting together dozens upon dozens of movie clips, but also the chore of finding them in the first place. The original song was written and performed nearly 25 years ago, so it’s worth noting that not all of the country names are correct anymore―Czechoslovakia, for example, dissolved into the Czech Republic and Slovak Republic. But these are minor details when assessing such a dynamic 1990s kid’s tune.

Just like the original broadcast version, the movie supercut version of the song clocks in at just slightly more than two minutes, a tidy length considering the immense number of countries listed.

The song itself has gotten some renewed attention of late, thanks to Yakko voice actor Rob Paulsen. The hyper-prolific voice behind the show’s front-and-center character, Paulsen gave fans yet another reason to cheer this week, dusting off a revised, updated version of the classic song.

Animaniacs fans have had plenty to get excited about lately—mostly because the series is slated to return to TV screens everywhere at some point in the near future. While no release date has yet been announced and it’s not clear what network will pick it up, it’ll reportedly be produced by Steven Spielberg’s Amblin Entertainment—just like the original series all those years ago.