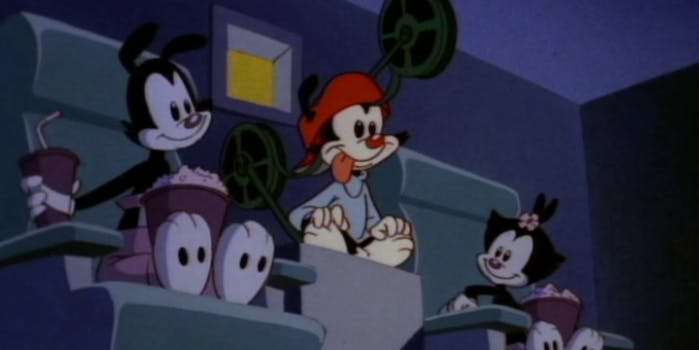 The best of the ‘Animaniacs’ on Netflix

Hello, nurse! The Warners are out of their tower causing havoc again, and boy have we missed them!

While Netflix releases the list of movies and TV shows coming to its streaming services every month, the addition of all 99 episodes of Animaniacs, the WB cartoon that ran from 1993 to 1998, managed to happen under everyone’s noses, as if it were one of Pinky and the Brain’s plans. Much like Tiny Toons, the show managed to poke fun at the powers that be all while entertaining children and amusing the adults who had to watch it.

So now the nostalgia is on full blast as fans discovered over the past few days that yet another one of their childhood staples is available to view once again.

oh my god
the animaniacs is on netflix now?

Animaniacs is on Netflix now so there goes my weekend plans.

Are you pondering what we're pondering? Animaniacs is BACK! On @netflix. NOW! No jokes. Well, except in the show. pic.twitter.com/BMlloRp14i

Do the antics of Yakko, Wakko, and Dot still hold up? That’s something fans will find out as they dive head-first into the episodes and get back into the adventures of the Warners, Goodfeathers, Slappy Squirrel, Buttons and Mindy, and of course, Pinky and the Brain—which later spun off into its own show.

We’ve narrowed down some of the great episodes Animaniacs has to offer to get you started with the corresponding episode number as they appear on Netflix. And naturally, they’re zany to the max.

Witty, clever, and all over the place, the Warners’ attempt to help Michelangelo paint the Sistine Chapel is a perfect example of what Animaniacs does best: take something we know and turn it on its head.

Animaniacs sometimes placed entire episodes on the shoulders of its recurring characters such as the Goodfeathers (an homage to both The Godfather and Goodfellas), and their parody of Fiddler on the Roof is both unique and true to its original source.

Want a good indication of how well Pinky and the Brain worked on its own? Take a look here at an entire episode devoted to the mischievous duo years before they got their own TV show. They’re fine.

After a famous actor—who’s essentially William Shatner—keeps hogging the karaoke machine, the trio tries to speed him up so they finally get their turn. Of course, the end reveals that nothing matters except for the Star Trek parody.

Watch it for the full context of the “fingerprints” joke alone that demonstrated just how much went past our heads as kids.

Animaniacs wasn’t only entertaining with multiple levels of humor, it was often educational as well. Some of these songs might be outdated and even inaccurate by now, but they got many of us through grade school.

Brain always wants to take over the world, and what better way to do that than to run for president? His plans are consistently terrible, but people love him anyway and he quickly rises in the polls. That doesn’t sound familiar at all. Nope.