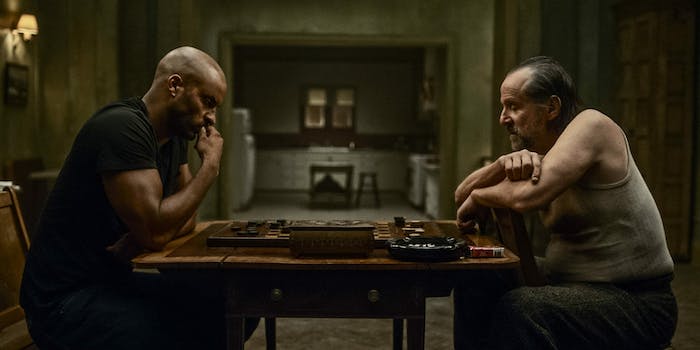 Starz has renewed American Gods for a second season after only two episodes.

Your prayers have been answered. #AmericanGods is returning for Season 2. #STARZ pic.twitter.com/QQ8Do9NpPH

Based on the award-winning Neil Gaiman novel, the show follows Shadow Moon (Ricky Whittle), an ex-con who is hired by Mr. Wednesday (Ian McShane) and caught in the midst of a war between the old gods and the new gods. From the minds of Bryan Fuller (Pushing Daisies, Hannibal) and Michael Green (Logan, Blade Runner 2049), the show has been praised by critics and fans alike for its visuals and the talent of its all-star cast.

The cast and crew of American Gods quickly took to social media to celebrate the renewal and to thank the fans.

With @bryanfullergram talking about American Gods Season Two. Which is now a thing that will happen. Henry the dog has many plot opinions.

Massive congrats to my incredible #godsquad cast🙌🏾🔥 Honored to be a part of this incredible,talented and insanely FUN family❤️🔥🙌🏾#AG2

Finally a huge THANKYOU to the #godsquad fans without whom the show wasn't possible this season nevermind next.Thanku for your passion🙌🏾

Whittle has said that the first season of American Gods covers approximately the first fifth of the book, so Fuller and Green will have plenty of source material to draw from for the second season.

The next episode of American Gods airs Sunday, May 14, at 9pm ET on Starz.