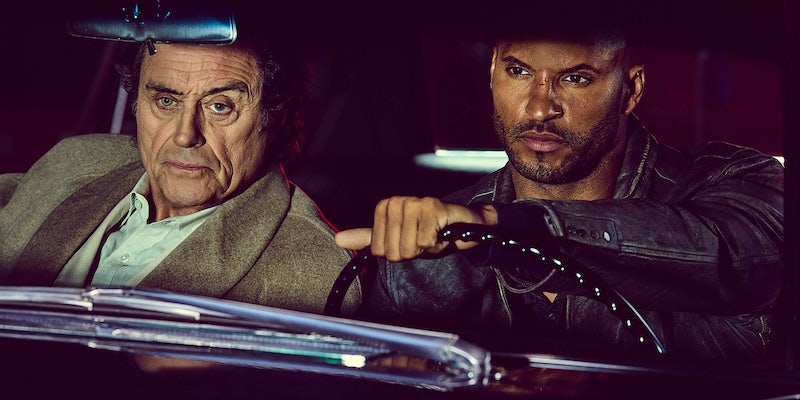 Review: ‘American Gods’ is a fittingly dark and mesmerizing adaptation

A spellbinding adaptation with all the strengths and some of the weaknesses of Neil Gaiman’s novel.

You can’t help but notice the sky in American Gods. Looming stormclouds and rainbow nebulae dominate the view during outdoor scenes, evoking a sense of religious wonder. The message is: humans are very small, and there’s a lot going beyond our understanding. An effective introduction to the epic mythology behind Neil Gaiman’s novel.

American Gods is a meandering road trip; a series of interlocking stories about deities who arrived in the U.S. as immigrants. As the modern world moved on to worship Jesus and abstract concepts like Media and Technology, the old gods decayed. The survivors now exist as sideshow figures like a leprechaun who does coin tricks in bars, or a jinn who works as a cab driver.

Ricky Whittle (The 100) stars as Shadow Moon, a brooding ex-con who just lost his wife. Hired as a bodyguard by the con artist Mr. Wednesday (aka the Norse god Odin, played by Ian McShane), he gets dragged into an apocalyptic confrontation between the old gods and the new.

Shadow is preternaturally calm in the novel, a quiet protagonist whose thoughts shape our experience of the story. But this kind of internal characterization is hard to translate onscreen, so Whittle’s Shadow is more talkative and emotive. He performs the traditional everyman role of reacting to the weirdness of his new life, which isn’t alway necessary here. American Gods works best when you accept its magic at face value.

Whittle isn’t exactly a weak link, but he’s overshadowed by Ian McShane’s twinkly-eyed sleaze as Mr. Wednesday, and star turns by recurring gods like Orlando Jones as the West African trickster Anansi. It’s one of those shows where the supporting cast are just far more interesting than the protagonist.

The book always felt like a low-budget operation, taking place in fleabag motels and roadside attractions, with brief forays into hallucinatory weirdness. But Supernatural already covered that flavor of gritty fantasy, so Starz focused on showcasing the magic of American Gods. With atmospheric production design and dialogue inspired by fireside storytelling, you’re nudged into accepting a fairytale mindset.

Fantasy filmmakers should take note of American Gods’ visual effects, which give the show a thoroughly individual aesthetic. Through clever cinematography and production design, we shift between the real world and dreamlike interludes with the gods.

When Shadow enters the bone orchard of pale, grasping trees, it looks more like early Tim Burton than Game of Thrones. This dark surrealism is interesting to compare with Preacher, another visually distinctive supernatural show, steeped in Americana. Where Preacher feels stylish but shallow, American Gods makes thoughtful use of every detail from lighting design to its choice of aspect ratio. Even CGI-hating luddites will gasp at moments like Anubis ushering someone into the afterlife, transitioning seamlessly from the real world to a luminous desert landscape.

The good news: Anubis has a great bedside manner. Bad news: you are dead. #AmericanGods pic.twitter.com/irjZChvIlp

It’s hard to imagine a better choice of showrunners than Bryan Fuller (Hannibal) and Michael Green (Heroes). Fuller specializes in stylish, macabre fantasy, accompanied by a coterie of talented collaborators including composer Brian Reitzell, production designer Patti Podesta, and actors Kristen Chenoweth and Gillian Anderson. American Gods is a marriage between Hannibal‘s visual panache and the mythic aura of Michael Green’s Kings, a contemporary Biblical epic starring Ian McShane as a tyrannical monarch. Together, the two showrunners set precisely the right tone for American Gods – while changing very little from the source material.

In the four episodes made available to critics, American Gods is an unusually direct (often word-for-word) adaptation. Purists will appreciate such a loyal recreation, but it does draw attention to some pre-existing flaws. For instance, it could have done more to counteract the sexism of the novel.

Told from Shadow’s viewpoint, the novel is shaped by the male gaze. Gaiman can barely go 10 pages without describing someone’s tits, in a story dominated by speeches from Mr. Wednesday, an elderly creep with an oily kind of charm. Likewise, the show namechecks “teats” and “fat-breasted women” in the opening voiceover, but waits 25 minutes to give any meaningful screentime to a female character. She’s a love goddess with an extravagantly explicit sex scene.

So, American Gods treads a familiar line. Is the show sexist, or does it simply depict the reality of its male protagonist? Shadow lives in a world of men (prison; Mr. Wednesday), idolizing his wife without really understanding her. This attitude makes sense in context, but it’s still surprising to see such male-dominated material from Bryan Fuller. He made his name with female-led dramas, and rewrote Hannibal to add more women.

With that in mind, it’s interesting to see what was changed, and what stayed the same. Gaiman helped to expand the source material, devoting more attention to the supporting cast. That means more time with the gods, and more time with female characters like Shadow’s wife Laura. She’s now a repudiation of the old “dead wife as motivation” cliché, reintroduced as a flawed individual with a backstory outside her marriage.

Most of these changes are welcome additions, with one exception. Episode 1 is inexplicably  peppered with lynching imagery around Shadow, who is biracial. Why introduce such a politically fraught idea, with no explanation? In a show about the melting-pot nature of American culture, starring a diverse cast of immigrant characters, it’s a baffling choice.

Thankfully this bizarre detail vanishes by episode 2, and we begin to understand where the show’s strength really lies: in the little vignettes about the gods themselves.

Neil Gaiman is a prolific short story writer, and his two most famous works—Sandman and American Gods—are both long, meandering tales with frequent detours to focus on minor characters. That’s why American Gods would make an awful movie, and why the show flourishes during those standalone moments where it zooms in on the everyday life of a god. Fantasy dramas often try to over-explain themselves, but American Gods just lets you sink into its world. It gives us a series of context-free, gorgeously realized short films about mythical figures, melding grimy reality with a powerful sense of ancient magic.

American Gods begins on April 30. The Daily Dot will publish weekly recaps as the show airs.