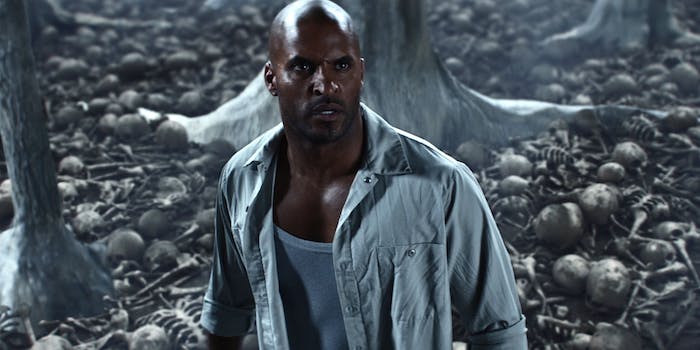 An intense and stylish introduction to the biggest new show of 2017.

Warning: This recap includes spoilers for American Gods episode 1. You can find our spoiler-free review here.

Everyone who reads American Gods remembers the cannibal vagina scene. Bilquis the love goddess consumes a man mid-coitus, absorbing him in an act of orgiastic worship. Recreated in lavish detail for TV, that scene is a microcosm of the show’s attitude: a loyal and visually distinctive adaptation, toning down the novel’s habit of reducing women to their body parts. Instead of being a sex worker with a one-off cameo, Bilquis (Yetide Badaki) is now a predatory internet dater who reappears in later episodes.

American Gods borrows entire scenes and chunks of dialogue from the book, while expanding on Neil Gaiman’s worldbuilding. Fans are virtually guaranteed to love it, although we’ll have to wait and see if new audiences have the same impression. The show’s premise isn’t immediately obvious in episode 1, splitting time between the main characters and one-off scenes with characters like Bilquis.

Ricky Whittle stars as Shadow Moon, an ex-con with a life like a miserable country song. He just got out of jail a day before the end of his sentence, but only so he could attend his wife’s funeral. Laura Moon (Emily Browning) represented an idealized goal for Shadow’s life after prison, but episode 1 drags her down from that pedestal. She isn’t just dead; she was cheating on Shadow with his best friend.

Set adrift by this bombshell, Shadow ends up working as a bodyguard for the con artist Mr. Wednesday (Ian McShane). Like Bilquis and most of the supporting cast, Mr. Wednesday is actually an ancient god: Odin, the head of the Norse pantheon. Brought to America by faithful immigrants, these old gods are now dying out from lack of attention, losing their audience to modern deities like Media and Technology.

There’s a reason why this show is called American Gods and not Shadow Moon. Ricky Whittle is an OK actor playing a rather generic protagonist, but he’s steamrollered by Ian McShane’s magnetic presence. Shadow was more interesting when you could follow his internal monologue in the book, but in the show he’s just a taciturn everyman, overshadowed by the more dynamic supporting characters. In episode 1, that role went to Pablo Schreiber as Mad Sweeney the leprechaun.

As you’d expect from something co-created by Hannibal‘s Bryan Fuller, American Gods looks gorgeous. Shadow meets Mad Sweeney in a roadside bar with alligator-themed decor, and the scene unfurls with pure style. As Sweeney tries to goad Shadow into a fight, his macho posturing feels like a seductive dance. The whole thing is perfectly timed to the jukebox music playing in the background, including Sweeney’s leprechaun-inspired coin tricks.

“How did you do it?” asks Shadow, as Mad Sweeney magically spits a gold coin into an empty glass, maintaining aggressive eye-contact. “With panache,” replies Sweeney.

That scene set the tone for my overall attitude to American Gods, which I can best summarize as “entertained but not emotionally invested.” Bryan Fuller and Michael Green created an atmospheric backdrop to the text of the novel, fleshing out its world with imaginative new scenes, surreal visuals, and a great soundtrack. But like the book (and unlike Fuller’s previous work), it doesn’t have much heart. Shadow is meant to be the human core of the story, but it’s hard to get invested in him when the supernatural characters are so much more memorable.

In each week’s recap, we’ll examine the mythological basis for one of the main gods. Mr. Wednesday is the obvious place to start, because while you’ve probably heard of Odin, Gaiman’s interpretation is a little off the beaten track.

Here’s the thing about Norse gods: They’re mostly assholes. They’re petty and vengeful, and their stories celebrate violence and cunning over morality or kindness. So when Marvel‘s Thor depicted Odin as a wise leader, it followed the same mindset as Disney’s Hercules, which rewrote Zeus as a jovial dad. These modern versions are influenced by the Western Christian image of God as a well-meaning patriarch, whereas the original Odin was a ruthless and manipulative strategist.

Odin arrives in America as a war god, demanding a blood sacrifice from a viking crew in the episode’s prologue scene. Mr. Wednesday is more subtle in the present day, but he’s hardly a trustworthy figure. He’s an aging horndog with the gift of the gab, relying on con artistry to pay for plane tickets and motel rooms. Inspired by stories of Odin disguising himself as an old man to roam the mortal world, American Gods portrays him with all the cunning of his glory days, but none of the epic power.

We also have Odin to thank for the only serious misstep in episode 1: the scene where Shadow gets kidnapped by the god of technology, tweaking a few details from the book. The Tech Boy is now a Silicon Valley whiz-kid instead of basement-dwelling nerd, and instead of just getting beaten up, Shadow ends up hanging from a tree.

Trees and hanging are a recurring motif in Norse myths. Odin once sacrificed himself by hanging himself from the “world tree,” Yggdrasil, and his human sacrifices were often strung up in a similar manner. The Tech Boy was taunting Mr. Wednesday by using the same symbolism, but to most viewers, that scene will just look like a lynching.

After a couple of rewatches, I’m still not sure why American Gods‘ showrunners decided on the loaded imagery of lynching a biracial man. Lynching has very specific connotations in real life, but the show doesn’t really examine what that means to Shadow or the story. So while American Gods‘ mythic background is as fascinating as ever, this was an inauspicious ending for its first episode.