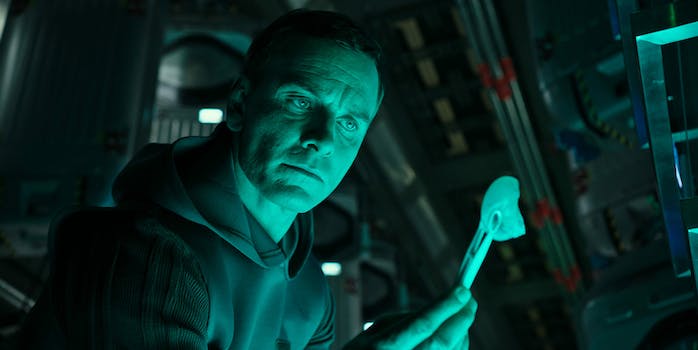 The disturbing sexuality of ‘Alien: Covenant’

From the homoerotic flute-fingering scene to the alien reproduction science, there's a lot going on here.

There’s a reason Alien’s xenomorph looks like a murderous dong.

Concept artist H.R. Giger loved to use genital imagery in his work, and his Alien design was instantly iconic: a biomechanical monster with a skeletal body, piston-like limbs, and a phallic head with a dripping, protuberant tongue. The classic thriller Alien glistens with bodily fluids as it brings Giger’s art to life. Its most memorable scene involves a man being penetrated through the mouth, impregnated, and then dying as he gives birth to something that (you guessed it) looks a lot like a penis.

The franchise wouldn’t be the same if Ridley Scott hadn’t picked up H.R. Giger’s Necronomicon, and spotted this eye-popping image:

Now, 38 years later, we have Alien: Covenant. It isn’t the greatest film of the franchise, but it’s certainly true to Alien‘s sexual roots. In other words, it gets weird. Real weird.

The Alien franchise is unmistakably sexual without being sexy—unless you have some pretty unusual tastes. Each film blends philosophical themes with body horror, often focusing on reproduction. Crew members refer to the ship’s computer as Mother. Alien: Resurrection cloned a mutant Ripley in an artificial womb. Sterile androids clash with messy humans and the sexless xenomorphs who want to impregnate them. These ideas only go off the rails when the movies tackle sex head-on, like when Alien 3 threatened Ripley with rape, or when Prometheus mishandled an infertility and abortion story for its female lead.

In my review, I wrote that Alien: Covenant is basically two movies stuck together. One is a derivative sci-fi thriller about Katherine Waterson’s character, Dany, and her crewmates, who incompetently attempt to colonize an alien planet. The other stars Michael Fassbender as a pair of identical androids, and that’s where the weird sex stuff comes in.

David was introduced in Prometheus as the sinister android creation of tech mogul Peter Weyland (Guy Pearce). In a classic evil billionaire quest, Weyland wants David to contact the Engineers, an alien race Weyland hopes will grant him immortality. The mission inevitably dissolves into gory chaos, but David survives to reappear in Covenant as the Frankenstein-like father to a creche of baby xenomorphs.

Fascinated by creation and reproduction, David spent the past decade studying his pet xenomorphs like a 19th century naturalist, collecting specimens in a home-made lab. Unfortunately, he’s held back by his lack of humanity, both on a personal level because he’s an amoral android, and in the literal sense that he needs human DNA to upgrade his mutant progeny.

Covenant unveils David as the true protagonist of the Alien prequels. He’s a science experiment that went horribly out of control, mirroring the Engineers’ accidental creation of the xenomorphs as a biological weapon. Fassbender modeled David on Peter O’Toole in Lawrence of Arabia, hinting at the colonial themes of David’s role as explorer, and his sexual ambiguity. (T.E. Lawrence’s sexuality is a hotly debated topic, as you’ll discover if you fall into the vortex of source links on his Wikipedia page.)

In the 10 years between Prometheus and Covenant, David evolved into a gothic villain with a penchant for dramatic capes and quoting Percy Shelley. Basically, he’s going through a teen goth phase. And after spending so much time alone, he’s thrilled to meet another Fassbender-model android in the form of Walter, the Covenant’s token robot crewmember.

In a direct response to David’s volatile and imaginative personality, Walter was programmed to be friendly and docile. We discover this detail during the film’s greatest scene, when David teaches Walter to play the flute.

Gently holding the flute in Walter’s mouth, David informs him that “I’ll do the fingering;” it’s straightforwardly homoerotic in a way that mainstream blockbusters rarely are. Alien: Covenant may be the gayest blockbuster in years, although it’s not exactly positive representation. The film’s one same-sex couple (Lope and Hallett) are only revealed after one of them dies, and the Fassbender-on-Fassbender scenes are intentionally disturbing. David is the sexual aggressor, trying to manipulate Walter away from his human friends before forcing him into a kiss. Eventually, David kills Walter and steals his identity. It’s a gleefully intense performance that’s simultaneously very fun to watch and damagingly stereotypical. (Walter, the “good” robot, has a crush on the female lead, but it’s nowhere near as convincing as David’s predatory yet sympathetic desire for companionship.)

Covenant pits traditional family units against a queer android with an army of murderous mutant babies. Populated by married couples and their embryonic children, the Covenant ship is humankind’s latest hubristic attempt at colonization. David is a rich man’s offspring gone rogue, identifying more with the xenomorphs than his human creator. The end result is a mish-mash of weighty sci-fi themes and elaborate homophobic subtext. Katherine Waterson’s character just wants to build a homestead with her husband, but her life is ruined by David’s obsessive desire create more xenomorph hybrids. The final scene sees him regurgitate two alien fetuses in an unsettling reversal of the face-hugger scenes, placing them alongside the embryos intended for human parents.

You can’t help but be morbidly curious about the sequel. Will it be the body horror equivalent of movies where an action star babysits a bunch of kids, except this time it’s David and a spaceship full of human/xenomorph hybrids? We can but hope.