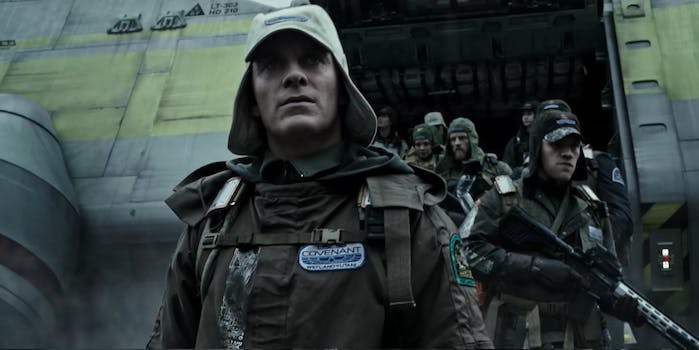 Alien: Covenant is two very different movies stuck together. The first is a formulaic Alien ripoff about a crew of interstellar colonists, dying predictably gory deaths on an alien planet. The second is much more entertaining, a campy melodrama starring a pair of android Michael Fassbenders.

David (Fassbender No. 1) was built by Peter Weyland (Guy Pearce), a billionaire obsessed with finding the meaning of life. In Prometheus, this is where director Ridley Scott careened off the rails of the Alien franchise. The original Alien was a masterpiece of suspenseful horror, but Scott wants to ruin it with quasi-religious explanations. Prometheus revealed that ancient aliens seeded human DNA onto habitable planets, and xenomorphs are the result of a biological weapon.

If you’re willing to accept this unnecessary mythic backstory, Covenant is better than Prometheus. It’s more coherent, and the setting—a rainy forest planet—feels fresh to the franchise. However, Prometheus left us with a pretty low bar. Covenant‘s main thriller arc is otherwise unoriginal, right down to the crew of stock characters. Katherine Waterson stars as the ship’s second-in-command, but her personality barely extends beyond a Ripley-esque role as the voice of caution. (Everyone else is catastrophically stupid, ignoring basic contamination procedures and walking alone into danger. In the world of horror movies, they all deserve to die.)

The Fassbender scenes, on the other hand? Are wild. I’d happily see the Covenant crew die within 10 minutes, if I got a feature-length version of whatever the hell Michael Fassbender thought he was doing.

Much of Fassbender’s role is too spoilery to discuss, but I can tell you this much: David survived Prometheus and landed on Alien: Covenant‘s planet, where he apparently turned into Riff-Raff the butler from The Rocky Horror Picture Show.

When we first met David, he was bleaching his hair to look like his idol Lawrence of Arabia. Prometheus characterized him in the classic mold of creepy robot villains, inhumanly strong and fascinated by mortality. Alien: Covenant dials this idea up to 11, highlighting the involvement of screenwriter John Logan. He’s best known for writing blockbusters like Gladiator and Skyfall, but Covenant feels more like his original project Penny Dreadful, a sumptuous gothic drama full of florid monologues and psychosexual weirdness.

Taking a drastic left turn from Prometheus, David now feels like a character from a Victorian novel. After 10 years alone on an alien planet, he now wears a cape, quotes Percy Shelley, and describes his home as a “dire necropolis.” I was disappointed that Covenant‘s xenomorphs just look like skinny fetuses, instead of bats or werewolves.

If that wasn’t enough, Covenant also includes a second Fassbender. Walter is a newer version of the David model, a sweet and straightforward counterpart to David’s extravagent personality. He’s the Covenant’s token android, and while his crewmates flee chestbursters and facehuggers, Walter and David share homoerotic flute-playing scenes and discuss the meaning of life. This is Fassbender’s second bonkers sci-fi role in six months (the last was Assassin’s Creed), and he’s making the most of his choices. Everything about David is deliciously over-the-top, from his posh English accent to his love of Wagner.

Alien: Covenant is the Jurassic World of the Alien franchise, repeating familiar hits to diminishing returns. It’s not as scary as Alien or as fun as Aliens, and despite some visually impressive moments, it looks more like a typical sci-fi blockbuster than the distinctive work of H.R. Giger. The only truly worthwhile scenes are with Fassbender’s David, a mesmerizingly bizarre creative choice. I can’t tell if Ridley Scott created such an intensely camp character on purpose, but David is a lot more watchable than the people we’re actually meant to root for.