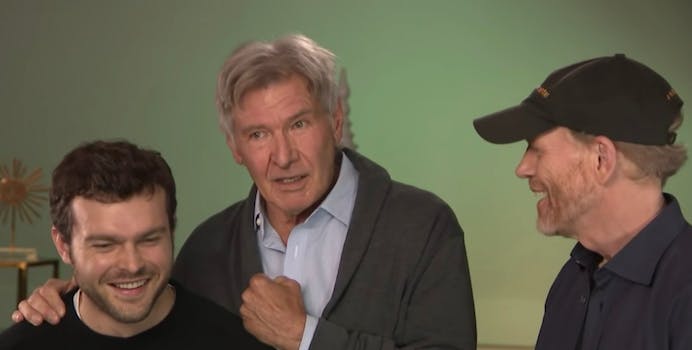 It’s not often that someone surprises Han Solo, but if anyone could do it, it’s… well… Han himself.

Alden Ehrenreich, who plays a younger version of the galaxy’s most famous smuggler in Solo: A Star Wars Story, discovered that firsthand over the weekend after Harrison Ford—the original Han Solo—gate-crashed Ehrenreich’s interview with Entertainment Tonight. As he recalled the main piece of advice that Ford gave him— “Tell them that I told you everything that you needed to know, and that you’re not allowed to tell anyone”—Ford walks up and tells him to get out of his chair.

Director Ron Howard and some of the crew look like they’re in on the on-screen meeting of Han Solo old and new, but Ehrenreich appears to be genuinely shocked to discover that one of his cinematic heroes is there before him. As Ehrenreich notes, he hasn’t seen Ford since the lunch they had prior to shooting Solo.

And Ford wasn’t there just to show a bit of support for the new movie. Having seen Solo, he has some high praise—in Ford’s quintessential manner—for Ehrenreich

“I just thought it was spectacular, and I thought he was so smart about what he did and how he did it,” Ford said. “I just couldn’t be happier.”