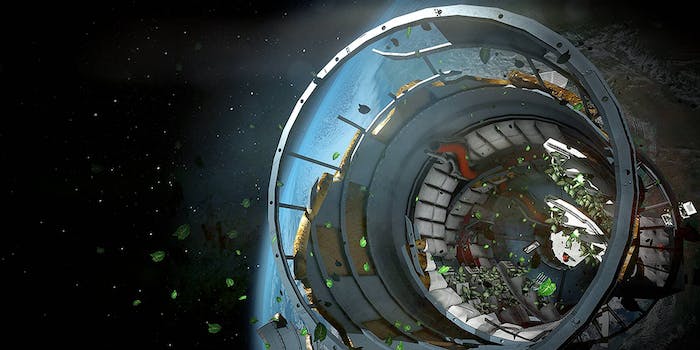 ‘Adr1ft’ lifts you off into a dreamy space adventure

This is one game demoed at E3 you'll want to look out for.

We’ve all had curiosity when it comes to space. What it would be like to explore the nothingness, to see Earth in the distance?

Three One Zero’s Adam Orth came up with the idea for Adr1ft  while trying to recover from a personal traumatic event. Played on Oculus Rift, the immersive virtual reality headset that Facebook bought earlier this year for $2 billion, the game let’s you escape Earth’s boundaries.

Once you put on the headset, you find yourself floating and breathing, with Beethoven’s “Concerto No. 8” humming in the background. It feels almost dream-like, slow, impending, but calming.

You push yourself over to a hatch door, and as you unlock it, you find yourself a small piece in a large delta of floating debris. To your right Earth continues to rotate. Around you green leaves from the once whole space shuttles greenhouse float around, only exemplified by the keystrokes from Beethoven’s music.

You look down, nothingness. You look up, nothingness. Just stars, infinite stars. Adr1ft is really special for what it makes the player feel. Having the Oculus there on your face definitely adds to the overall awe. The demo was just a small glimpse at what the overall game is trying to accomplish. Orth said that the game would be non-violent and will involve a series of puzzles and challenges.

Adr1ft will be released sometime in 2015, and will be coming out on PC, Xbox One, and PS4. Orth is also looking into bringing the experience to Sony’s VR headset, Project Morpheus.