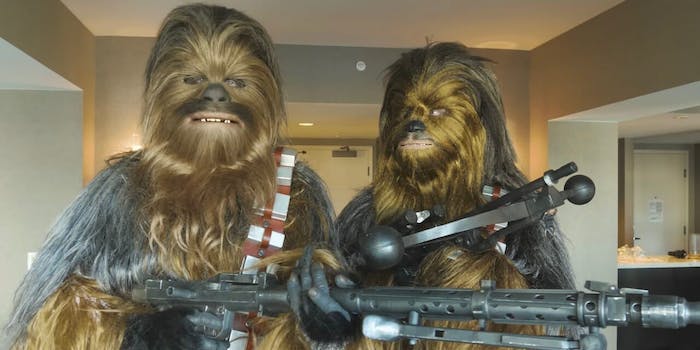 Most people don't recognize them.

Every year Adam Savage descends onto San Diego Comic-Con with a brand new costume so he can walk the floor incognito, but this year he gave first-time cosplayer John Hodgman a Wookiee-worthy introduction to the craft.

They both went all-out as Chewbacca, with Savage designing his own costume while Hodgman had some help. Not only did they have realistic costumes and raccoon-eye makeup, putting on the costume was a process that included wearing giant boots and—for Hodgman at least—a lack of peripheral vision.

While they don’t manage to go completely unnoticed while they’re on the convention floor, the costumes were clearly a hit with kids and adults alike. With some high-fives and Chewbacca’s signature growls, they’ve already got the part nailed down.