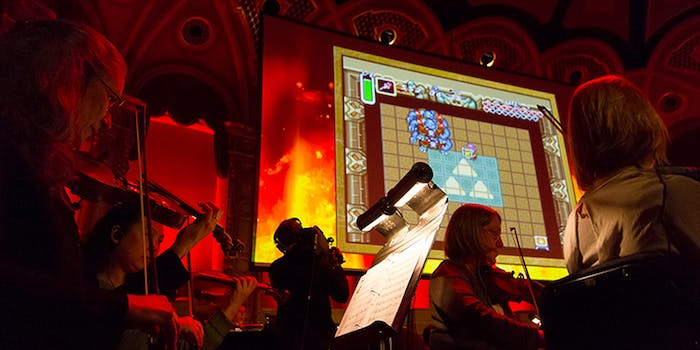 The Legend of Zelda: Symphony of Goddesses is coming to a city near you

The popular Symphony of the Goddesses concert series returns next year.

Going to the concert hall to hear some Mozart or Beethoven is nice, but sometimes you just want to listen to some video game music. With violins.

The Legend of Zelda: Symphony of the Goddesses orchestra tour dates for 2015 were announced today. The worldwide tour currently encompasses 19 performances in nine different countries, and it’s being sold as a celebration of the impending release of The Legend of Zelda: Majora’s Mask on the Nintendo 3DS handheld game system.

The current run of orchestral Zelda performances began at Nintendo’s E3 press conference in 2011, and it included at least one, adorable rough spot. The kinks have long since been worked out, and this new concert tour, dubbed the Master Quest series, will be the third set of concerts produced by Jason Michael Paul.

Koji Kondo, the composer for Nintendo’s Legend of Zelda series approves the music for Symphony of the Goddesses tours, and the music selection in 2015 will be taken from over 20 years’ worth of Zelda games.

The 2015 tour will kick off in Nashville, Tenn., on Jan. 21. Further information may be found on the Zelda Symphony website.