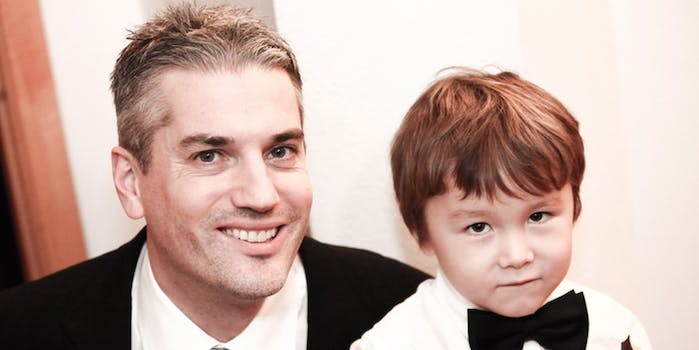 Kris Morness's ex-wife fled to Japan to be with her ailing mother—taking 5-year-old Max with her.

Kris Morness is living every parent’s worst nightmare. He hasn’t heard from his 5-year-old son since the pair talked on Skype July 25.

A day after that chat, his ex-wife boarded a plane to Japan with Max. Morness is certain she never plans on returning. To fight back against his wife and close the Pacific-sized gulf separating him from his son, Morness is launching a public campaign to get him back.

Morness, a video game developer, claims Chie Kawabata cut off all contact between him and Max after fleeing with him to Japan. Earlier this month, a court had awarded him full custody after Kawabata breached several court orders. Officials ordered her to return to Washington with Max, but she’s been out of contact and Morness doesn’t know where Max is.

Morness created a website, chiekawabata.com, to lay out the details of the case and raise awareness of his plight.

“I decided to go public because there is lots of evidence she is not returning,” Morness told Kotaku. He’s not worried that Kawabata might sue him for defamation over the warts-and-all site, because she’d have to return to the Washington State jurisdiction to do so anyway.

“I had already looked into the legal risks of putting up such a website and I am in the green there,” he added.

The site includes transcripts and rulings from the legal proceedings between the former couple over the last two years. Kawabata, 46, attempted to return to her birth country of Japan in 2012 after her mother was diagnosed with cancer, but courts determined the relocation would be harmful to the child and blocked her. She’d tried to leave the U.S. twice in total, once to Beijing and the second to Tokyo.

The court-approved parenting plan from last year showed Kawabata was Max’s primary guardian, with Morness granted custody on alternate weekends and some school vacations. International travel required advance approval from the other parent.

Max was with Morness through the first half of July. After two missed Skype calls with his son later that month (the agreement called for three per week), Morness emailed Kawabata asking where he was. According to the website, Kawabata said on Aug. 2 she’d taken a month-long leave of absence to be with her mother. She added Skype calls would resume that weekend, but Morness has not spoken with his son since last month.

He contacted Kirkland, Wash. police , who confirmed Kawabata and Max left the country in late July without advance approval by Morness.

Morness, who’s worked on Command & Conquer and Age of Empires titles, may have difficulty in extracting the boy from Japan, Kotaku notes. The country is not yet a member of the Hague Convention on the Civil Aspects of International Child Abduction treaty, meaning it’s tough for non-Japanese parents to get their kids back after an abducted child is taken there.

“[Kawabata] is denying Maximus a loving relationship with his father,” Morness wrote. “She is prepared to do anything to anyone, including her own child, in order to get her own way.”