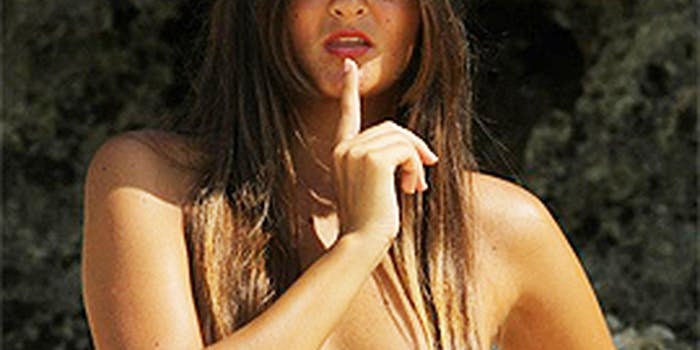 How much is virginity worth? An online auction attempts to find out

A 20-year-old woman and a 21-year-old man are selling their virginities online as part of a controversial documentary project.

It shouldn’t be news to anyone that virginity is a highly valued commodity—women’s moreso than men’s.

But Australian filmmaker Justin Sisely has decided to find out exactly how much virginity is worth, by getting two young adult volunteers to sell theirs off for the public good.

“This is going to be a good opportunity because I can hopefully change the way we think about sex in society,” says Catarina, the 20-year-old Brazilian woman who put her virginity up for auction on Sisely’s website, VirginsWanted.com.  21-year-old Alexander joins her, though the highest bid for his virginity so far is a mere $2,000, just 10 percent of the $20,000 fee the two virgins received for participating.

The bid for Catarina’s, on the other hand, is currently up to half a million dollars. (The first public bid for the prize was for $1.)

Though Sisely and Catarina insist that the project is about questioning sexual mores, the contest itself is unquestionably heteronormative, with the rules stating, “The penis entering the vagina defines consummated sex,” and the “Virgin Sex Terms and Conditions” including the bizarre, Pretty Woman-esque touch that “the winning bidder cannot kiss the virgin.”

The rules also highlight the stark gender inequality involved in the assumptions underlying the auction. In addition to Catarina’s virginity being far more highly priced than Alexander’s, her body is also far more publicly scrutinized: he just needs to have two family members vouch for his virginity; she has to undergo a rigorous medical exam and be medically certified a virgin by a gynecologist, who will then turn over her records to the purchasing bidder.

And while Alex’s Facebook gallery has only 4 pictures of him doing martial arts while fully clothed, Catarina’s is literally a topless modeling portfolio.

NME.tv reports that the actual act of consummation will take place on an airborne plane, in order to avoid the pesky legal issues that might arise on the ground. Sisely has faced legal hostilities on multiple continents since he first conceived the idea as a reality TV show back in 2010. The Daily News reported then that Sisely’s native Australia had kicked the project out on pain of prostitution charges. After Sisely attempted to relocate to Nevada, the original participants dropped out and funding for the show fell through.

Undaunted, Sisely recruited Catarina and Alexander and retooled the idea as an auction, to be turned into a documentary. An explanation for how Sisely will objectively document an event that he has financed and orchestrated himself seems unforthcoming; attempts to contact the filmmaker were unreturned at press time.

From an archive of the project’s original website, however, we have Sisely’s views on the project:

Throughout the film it is our objective to create a discourse that questions the repressive religious, political and social mechanisms that limit the ways that we can understand and act upon our individual sexual natures.

Sisely wasn’t above using religion for the cause; initially he received backlash when visitors to his website realized that the image of the Virgin Mary, which Sisely used to promote the documentary, wasn’t actually calling on proponents of abstinence. 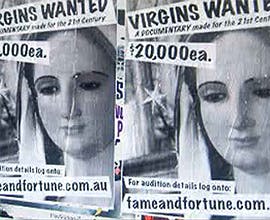 The auction, which was to have ended today, has been extended for a final 24 hours. With less than a day remaining, it looks as though Catarina and Alexander may soon be meeting their winning bidders face to face.

As part of the “documentary,” Sisely plans to film the actual sex act.

But at least there won’t be any kissing.