#Slanegirl: How the Internet turned a girl’s Eminem concert into a nightmare

A 17-year-old girl would probably take an arrest record over what happened to her when concert photographs went viral.

More than 50 people were arrested at an Eminem show in a tiny Irish village this weekend, but none got as much attention as #slanegirl, a teenager who’d probably take an arrest record over what happened to her when concert photographs went viral.

The event, held at Slane Castle, drew 80,000 people. There was a massive fireworks display. Despite a strict no-alcohol ban, a heavy security force of 700 on-duty police officers couldn’t stop the fun for most of the partiers in attendance.

But the Internet turned the revelry into a living nightmare Saturday for a high schooler after photos surfaced of her performing oral sex on two different men in the crowd.


One photo shows the girl surrounded by men in the crowd. In a second photo, the girl locks lips with a guy in a neon-green hat and matching pants. In another, more explicit shot, the same man is almost totally nude. He raises his hands victoriously in the air. He has not been harassed or bullied or had his identity broadcast to the Web. 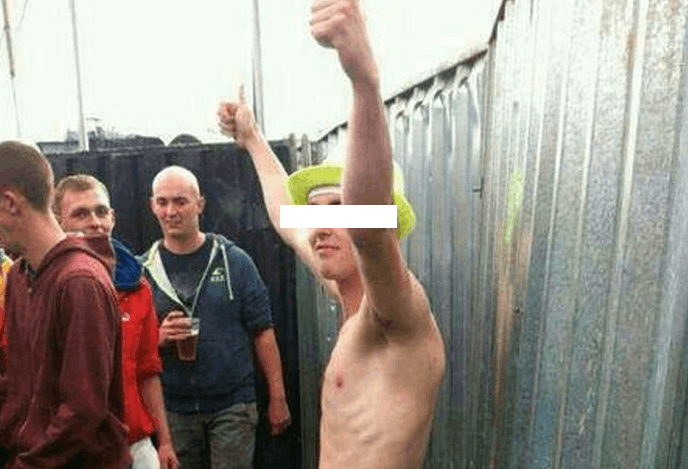 The girl is allegedly 17, the age of consent in Ireland. But she quickly had her full real name revealed, her images spread around Twitter, Facebook, 4chan, Tumblr, and Reddit, and found herself at the center of a trending Twitter hashtag, and became the subject of a subsequent probe by the Irish Police.

The hashtag has filled with a mix of mockery, vitriol, and angry defense of the girl as controversy builds over yet another young woman being slut-shamed and harassed over her sexual behavior.

In the wake of the backlash over the backlash, a popular Facebook slut-shaming page called Sickipedia, which had more than 14,000 likes, was taken offline after it posted pictures of the teenager and mocked her with terrible image macros like this one: 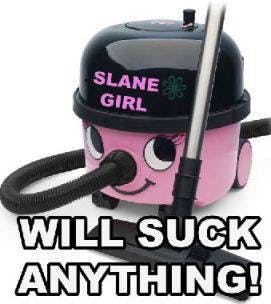 “Welcome to today’s reminder that it’s different for girls,” wrote iamnotafeminist on Tumblr:

Him: shirt off, shorts down, cock out, arms held high, beaming with triumph. Her: fully clothed, kneeling, sucking.

It’s a grotty scene, and so are the reactions to it, because while there are two people at it in the picture, only one of them has been the focus for the attendant flack. She was given a nickname that’s been trending since… She was also labelled with epithets like “dirty”, “slut”, “rank” and “this is why men fear having daughters”. The guy? He’s as much of a bystander as the ones watching, apparently.

Erm why is #Slanegirl getting all the shit? The guy that fingered her is wearing a NEON TRILBY #disgusting

But it didn’t stop the inevitable jokes and slurs from rolling in. For every shocked onlooker, plenty of people chimed in to call #Slanegirl the #Slaneslut.

“Good god, I hope her parents aren’t on Twitter or Facebook,” reads a Reddit thread on r/Ireland.  The Independent described the girl’s parents, meanwhile, as “distraught.”

Update: A Twitter rumor that the girl committed suicide earlier this evening appears to have no verifiable source. It may have been started by Twitter user @DenchLAD, whose account has been suspended.

Photos of the teenager, however, continue to circulate the Internet, with variants showing her in poses with Hitler and other memefied figures. #Slanegirl has already been listed as a meme at Know Your Meme.

Local authorities asked the public on Sunday to respect the girl’s privacy.