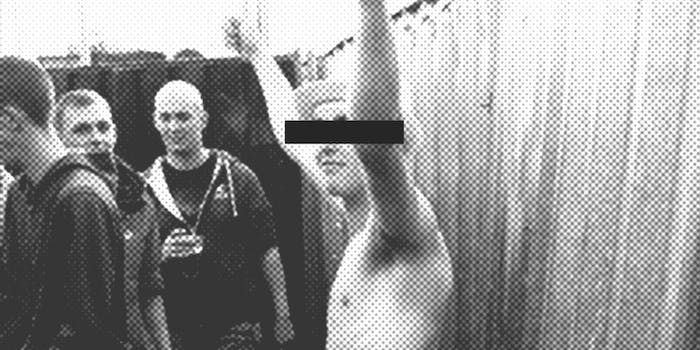 Everyone who shared the #Slanegirl photos got doxed

The question of whether the images actually are child pornography is complicated.

The backlash over a round of Twitter slut-shaming has led to nearly two dozen suspended accounts as users flock to support an Irish teen known as #Slanegirl.

Over the weekend, Irish Twitter users were quick to throw the wolves of the Internet at a girl who was photographed multiple times engaging in public sexual activity at an Eminem concert at Slane Castle, near Dublin. The girl’s identity was leaked and her image turned into a meme as #Slanegirl went viral.

Now, the Independent reports that the girl has been hospitalized and sedated. She’d had a rough weekend: According to the police, the girl reported having been sexually assaulted at a different outdoor event on the same night—before her photos went viral.

On the Web, the tone seems to have shifted rapidly. What started as a litany of mockery turned into outrage that the girl’s photos—which technically constitutes child pornography; she’s still a minor under Irish law—were ever leaked to begin with.

The doxers have become the doxed. A source sent the Daily Dot email proof that roughly 125 accounts were forwarded to Twitter. That number includes those who first tweeted the #Slanegirl images, plus about 100 more who retweeted.

In another, larger image, also provided to the Daily Dot, the faces and IDs are visible. It reads “Stand up for #Slanegirl.”

Most of the 24 accounts named in the images have been suspended. A few, however, are still live and tweeting about the #Slanegirl meme. Here she is with Hitler: 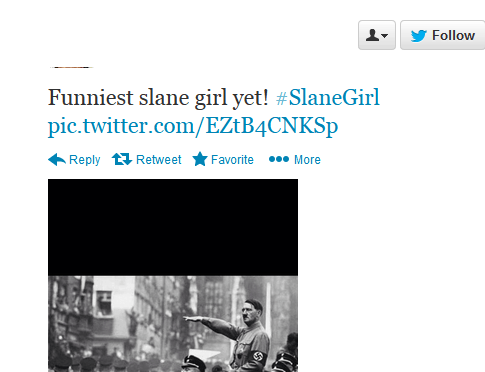 Twitter’s official response to the source who reported the accounts:

Thank you for your report. We do not tolerate child sexual exploitation on Twitter and partner with the National Center for Missing and Exploited Children (NCMEC) to ensure that appropriate law enforcement agencies are notified when such content is located. We will review the content you have reported as soon as possible. Please be aware that content that has been removed from the site may still be visible to you until you’ve refreshed your browser or cleared your browser’s history or cache.

The question of whether the images actually are indicative of child pornography is complicated. Ireland’s UTV points out that in the Republic of Ireland, where the teen reportedly lives and where the photos were taken, “the age of consent is 17 and indecent images relate to under 17s.”

But in other countries, where the photos were shared and distributed online, the laws differ. The U.S., for example, defines child pornography as “any visual depiction of sexually explicit conduct involving a minor (someone under 18 years of age).”

On Twitter, backlash against those who outed the teen’s photo turned fierce, as the new tag #Slanegirlsolidarity circulates among supporters of the girl. Many Twitter users have changed their own Twitter names to “Slane Girl” in protest—because “she could’ve been me.”

Now THIS has made me happy. Faith in humanity slightly restored. #slanegirlsolidarity because she could’ve been me. pic.twitter.com/rv5717xysq

This slanegirl story has made me sick to my stomach. Horrendous. Leave that child alone.

Meanwhile, the Gardaí (Irish Police) informed the Independent that the girl “has not been medically fit enough” to comment about the incident.

Sources say she has yet to file a formal complaint about the photos.