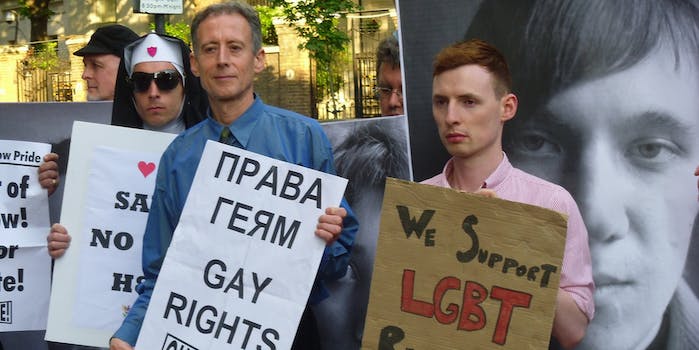 Talking online about homosexuality is now illegal in Russia

Russia has joined Singapore in functionally outlawing even the mention of homosexuality—publicly and on the Web.

Russia has joined Singapore in functionally outlawing even the mention of homosexuality—publicly and online.

Two bills just passed by the lower house of the Russian parliament outlaw rallies and parades, which in Russia have often been violently opposed by right-wing groups. The bills also make publishing information on gay life and gay rights on the Web, in print, and in broadcast media illegal.

The first bill, passed on June 11, was characterized as a measure to stop “gay propaganda” and was focused on that old anti-gay canard of protecting children.

Despite homosexuality having been decriminalized in 1993, the bill had no opposition in the Duma, Russia’s parliament, passing with a vote of 436-0, with one abstention.

According to an AFP report, individuals using media, including the Internet, for gay “propaganda” can be fined up to 100,000 rubles ($3,000), and organisations can be fined up to one million rubles and be closed down for up to 90 days. Non-Russians who do the same can be fined the same amount and be imprisoned for 15 days before being deported.

A second bill criminalizes “public actions expressing clear disrespect for society and committed to the goal of offending religious feelings of the faithful. Breaking this law, which passed 308-2, can result in a fine of 300,000 rubles and a possible jail sentence of up to three years. If it is done in a place of worship, a clear reference to the church protest of the now-jailed band Pussy Riot, the fine increases to 500,000.

The ubiquity of the Internet and the vagueness and subjectivity of “disrespect” ensures that practically any communication on gay issues could result in legal action.

The laws run contrary to the Russian constitution and the European Convention on Human Rights, to which Russia is a signatory.

Gay activists staging a “kissing protest” outside the Duma while the bill was being debated were physically attacked by opponents. Twenty of the activists were subsequently arrested.

The bills must now pass the Russian Senate and to be signed by President Putin. Given the overwhelming support for the bills, as well as the recent trend of using the law to clamp down on dissent in the nominal democracy, their becoming law seems, if not certain, at least likely.